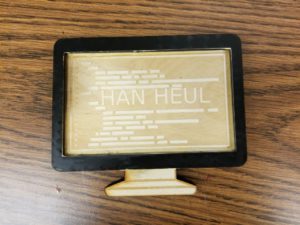 For the first assignment, we designed and made a name tag using a laser cutter. I wanted to incorporate my passion for computer programming in the design, and I decided to design a name tag that resembles a computer monitor.

I printed the middle and top layer using the Epilog laser, which was considerably easier to use than the Universal laser. The bottom layer was printed with the Universal. The top two layers printed without any issues.

The bottom layer, however, presented some problems. The plywood was too thick, and had to be cut three times. Consequently, a large part of the layer was burnt. However, as I was planning on making a three-layer name tag, and the burnt part was to be covered up by other layers, I just proceeded with making my name tag.

The final process was glueing all three layers together. I first glued the bottom and middle layer, and once it dried, I glued the top layer to finish my name tag.

I am generally pleased with the final product. It is close to what I imagined in my head, and I think it reflects my interests quite well. Although the burn marks are slightly noticeable, I don’t think it’s too much of an issue.