This week we got to make little robots, which was very fun. We had class on Halloween, so I decided to make a little ghost. I glued a popsicle stick to a servo and glued that into the cup so that it looked like it was waving. While working on it, I played around with how far and how fast it moved:

Admittedly, it doesn’t look very much like a ghost, but I ran out of time and it didn’t really affect the function so I never finished that part.

While thinking about what sort of robot I should make, I was sitting in my dorm room and my eyes wandered over my box of plastic silverware. For some reason, I was hit with the burst of inspiration to make a skiing robot, using knives as skis. I started sketching my idea: 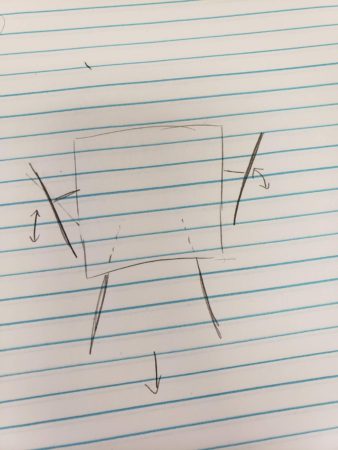 I eventually decided to use forks for the poles since I had them on hand. I planned to have two servos act like arms to swing the poles and they would push the bot forward. I wasn’t sure exactly how I wanted to make the person, as reflected in my drawing. I wanted the bot to resemble a person skiing. However, having a figure that looks like a human balancing on skis felt like adding unnecessary complication to the bot. In the end, I used the cup from my in class assignment since he already had the googly eyes to look the part.

Construction wasn’t too difficult, but it took a lot of trial and error. The biggest problem was realizing that every time the arms swung back they also had to swing forward without pushing backwards. To fix this, I added a third servo to push the bot up as it swung back. This took some planning to build a piece that could support the contraption and also fit back into the cup. I also had to re-glue the servos and forks several times to get the distance from servo to ground correct.

One of the frustrations I had was with the wires getting in the way of the forks, so I added holes to the cup for the wires to flow out of the top nicely. This makes the project more organized, although the angle the wires pull at sometimes stop it from locomoting unless held at a better angle.

Programming was pretty simple, too. The arms basically just had to use the sweep code. Because the servo was flipped, I did have to change the left servo to go to pos-1 while the right servo went to pos. In between the for loops, I just had to have the third servo switch between two angles that I found experimentally. In the end, I had this code:

I’m pretty happy with my bot, though it is clearly a rough draft. For my redesign, I think I’ll keep the silverware because they sort of inspired me in the first place. However, I’d like to make the figure look a little nicer as it currently is full of random holes. I figure my second attempt will look less slapdash since I have a better idea of where things need to be glued. The coding I did for this bot wasn’t very complex, so  I’d also like to look into adding an ultrasonic sensor to make it stop if it gets close to something.