My name-tag was inspired by my current masters degree and my previous studies in film. I wanted my name-tag to incorporate elements that were important to me. I am a Librarian Studies graduate student and like many librarians, love to read/like books. Additionally, I was a Film and Television Producing student many moons ago and I still love films. I was also excited to have a chance to work with Inskcape again. I have used Inskcape before to make a magnet for a 3D printer at my former job, but I am not terribly knowledgeable about laser cutters or the Inkscape program.

I knew that I wanted to have a project that was layered, similar to Professor Emilie’s acrylic design. The original concept was to do the name-tag on acrylic. The wood was meant to be a prototype as I was told that if the wood did not look good, then the acrylic would not either. However, after spending an additional two hours after class on Thursday, trying to make the name-tag feasible, I decided to stick with wood, primarily out of frustration. 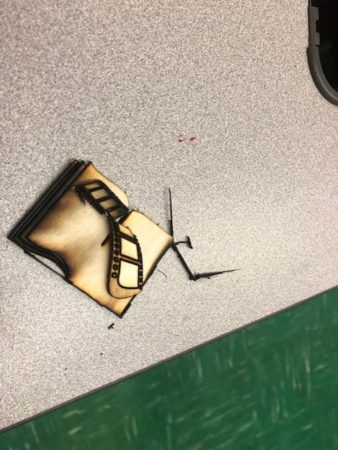 My first attempt- the reel was in two pieces 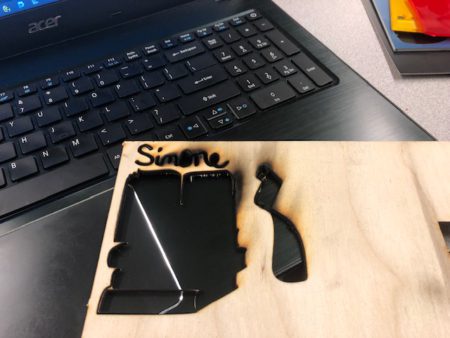 Note the charring in the wood

The reason my original project did not work was that I had too many nodes. Consequently, when the laser printer followed the nodes, it had to go over the same spots multiple times, which increased the pieces breaking apart and getting damaged. The raster was perfect, but the items were still attached to the original wood. Thus, we re-vectored it and ultimately, it was too much for the pieces to handle.

As a result, I tried to keep the calligraphy aspect, but I realized that for letters like “m” and “n,” there were still too many lines and thus, I would run into the same issues. Therefore, I got rid of the lines in the “s” and the “i” and changed the latter half of my name to simple text to not spend hours trying to get rid of extra lines. I was kind of sad about that because I really liked the calligraphy aspect as I wanted to give the appearance of having written the words by hand.

Then, I decided to switch book images. My original had lots of lines, like the calligraphy name, and to simplify everything, I found a simpler silhouette.

On Tuesday, I decided to come during open hours and see if my tweaks worked. I had to reset the parameters, like making sure the lines were still 0.001 inches, the fill colors were red 255, etc.  Luckily, I realized that my .pdf file was not correct and I was able to correct it before going to the laser and printing it out. 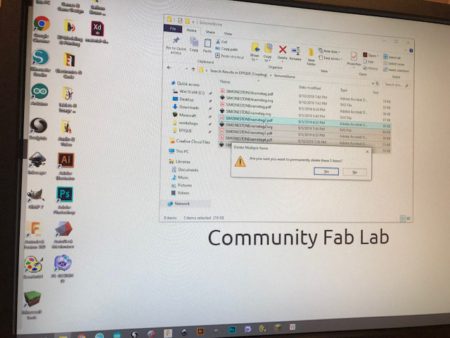 Overall, I still need to improve my Inkscape skills. Although, I thought I had removed the lines that would cause issues, I was assisted by the lab technician with removing others to ensure that my name-tag would not char the way that it did last time. While I got to do some of this removal, he ended up doing a lot of it for me because I was not competent and I was very slow.

If I had more time, I would have done my name differently, made it larger so that the letters would be less likely to fall apart. When I printed with the laser, it destroyed the cut-out letters, so I decided to use the name from the leftover wood. To help with this, the lab technician suggested that I draw a rectangle to give the illusion of a name-tag backing. 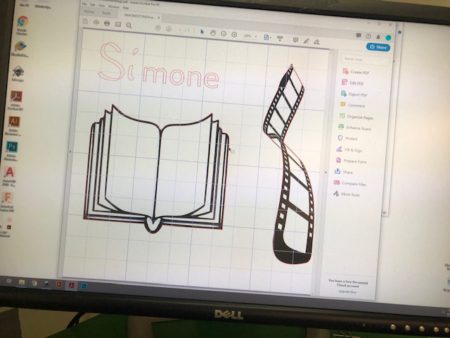 The finished product is a hot-glued amalgamation of several pieces. I spent time trying to decide if the reel should go over the book and not the letters. In the end, I decided that I liked the idea of having the film reel near the letter, “s,” and draped over the book and the name portion.

Moreover, I am glad that it turned out well. I received a lot of help and this was quite daunting. I had never used a laser cutter. The first time I used the machine, I was constantly getting Maxx or Duncan to help as I worried that the fire was too high and that I was in danger of burning down the lab. I may decided to incorporate this in my final project. 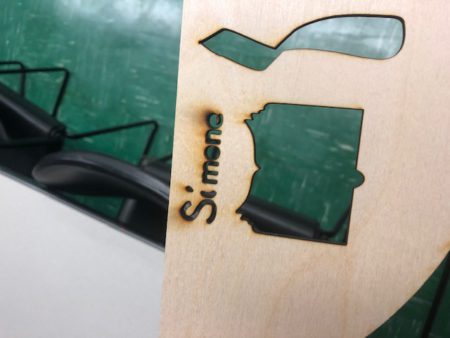 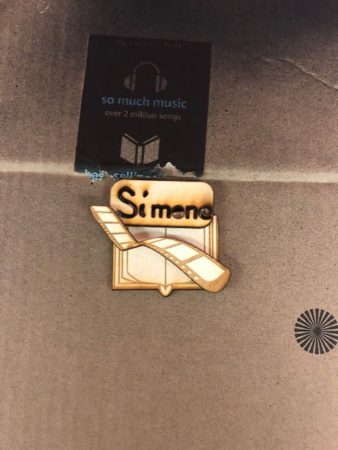