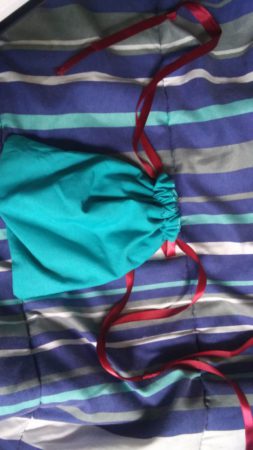 First, we created the drawstring pouch with two linings. We had to sew the two linings together for this one, have the inner lining go inside the outer one  and leave some space on the left and right sides when sewing for the ribbon to go through. This was a fun assignment. I learned what straight and back stitches were and was very satisfied to actually see the finished project. This was my first time sewing and I learned that you needed increased concentration when sewing. 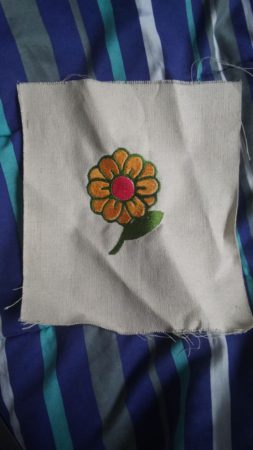 The second week we learned how to embroider on canvas. We took the canvas, put it in the placeholder and placed it under the embroidering machine after hooking the placeholder onto the machine and passing the PE designed embroidery in the machine. I used green, pink and yellow to embroider a flower. When I transferred the flower from Inkscape to PE design, I had more than three colors show up and that would have not embroidered it well. So I had to separate the different layers of colors on Inkscape and keep only 3 solid colors, so that PE design could sense only the 3 colors and the sewing machine could recognize the 3 separate colors as well.

Finally, I decided to use a joke to embroider on a tie and give to my friend. I used the above joke as inspiration to design my embroidery.

First I designed my embroidery on Inkscape. For this, I had to create the shape of a web browser that could show running the web app “Hello World”. I used three different colors for the browser. I had to create fills inside each shape I created so that the embroidery could come out looking solid. Also, instead of writing the text on Inkscape, I wrote it on PE design itself so that the embroidery looked nice. When I first transferred the browser image from Inkscape to PE design, the background of the image was black. So I had to go back to Inkscape and draw a white rectangle over the image and transfer it behind everything else. When transferring the svg to PE Design, the design created by the software wasn’t what I was expecting. So I was recommended to export the design as a PNG and then transfer that. The embroidery design on PE design then came out looking exactly how I wanted it to. I took the design in a USB drive to the embroidery machine and embroidered some cotton cloth. I used a stabilizer under the cloth as this was cotton I was using and it wasn’t strong enough in itself to be embroidered upon. However, the embroidery went wrong as the cloth got embroidered on itself. I later fixed this. I cut out the tie and it’s back piece and sewed them together on a sewing machine with the back pedal as I wanted to manually sewing the tie.  Cutting the parts was a challenge as I had to make sure that the two sides of the tie were both equally aligned from the centre when drawing the two sides of the tie. I used a ruler, a chalk and the printed lines on my cloth to decide the angle of the lines to draw outlines as this was a very long tie. I learned that I wanted the sew to be manual because I wanted it to be precise so I wanted to do it manually to have control over where the stitches were going. I used straight stitches. Then I took the two edges of the tie and sewed them together. I ironed the tie and was recommended to embroider the pattern again straight on the tie instead of using the already embroidered piece to sew on top of the tie. So I took the tie and placed it back into the placeholder and embroidered my pattern on top of it. This time I got tangles on the back of the embroidery because my thread got out of position when sewing. I had to cut the threads off the back of the embroidery and replace the thread on the machine. Also I had to cut the thread inside the needle short as it was getting in the way of the sewing machine. I hand stitched the back piece onto the folds of the tie in the back to make it more sturdy and used a needle to draw out the thread connecting two embroidered words and cut it to make it look neater. Overall, I really enjoyed building the tie. 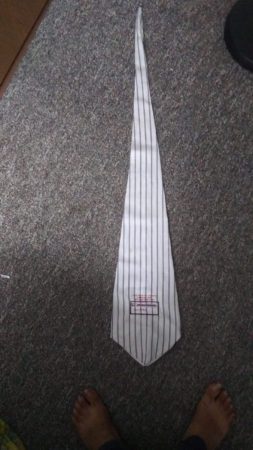 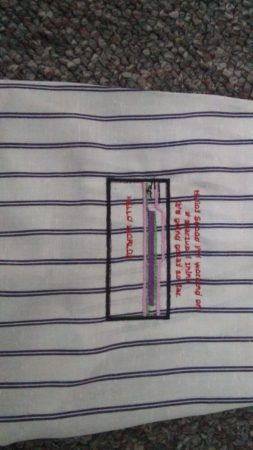 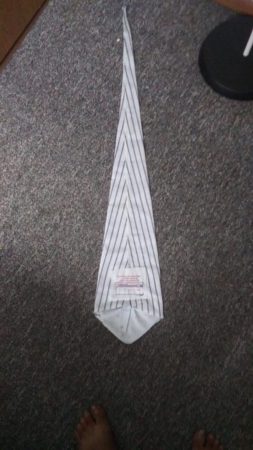 I wanted to find something I really wanted to make, so I went with drawing inspiration from gifting something to a friend. I like to use humor in life because I am serious in general, so I decided to relate humor into my project. I had some ideas for a tie to begin with but then I thought of what would make a cute gift, and I immediately thought of putting a joke on the tie. Initially I was going to straight up use an image to embroider on the tie but that might not have worked out very well so I decided to draw a picture of a browser instead. I am glad I did that because when I saw my picture turn into embroidery, I was rather amazed as it looked rather close to how a browser looks, so I knew I had done a good job of designing it. I was also feeling satisfied with my idea because I like CS too. I wanted to make a souvenir tie instead of an actual tie so I could embroider the joke on a large part of it. For the sewing part, I learned I wanted to use the pedal instead of the automatic machine setting as I had to sew a rather long tie. I learned that I wanted to use the back pedal so that I could precisely stitch the tie to my heart’s satisfaction. When the stitch came out straight and precise, I was indeed very happy. Drawing the tie outlines accurately was also challenging because I did not use paper cut outs as they were not big enough for the tie. Because I had not embroidered my cloth correctly on the first attempt, I had to try another time. I have to repeat a process a few times before it is ingrained in my head how I am supposed to do it on account of my anxiety, so I need to practice something a few times before it registers. I learned that in this class, I should keep repeating a process if it’s not easy to grasp in the first or even the third attempt and to take things slowly. Sewing requires a lot of precision and concentration is what I learned from this project. I have learned to appreciate the art more.