I had only done a little bit of sewing before this project cycle, so it was fun learning how to use a sewing machine again and learning some new ways to hand sew in this lab.

The first thing I did, besides the practice piece during lab, was the small bag. 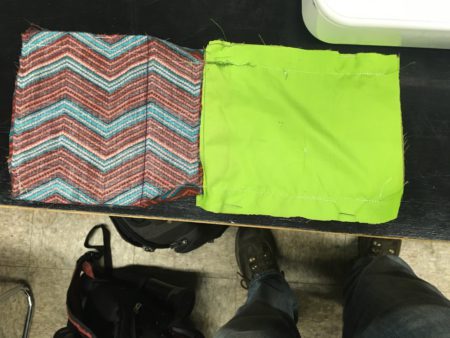 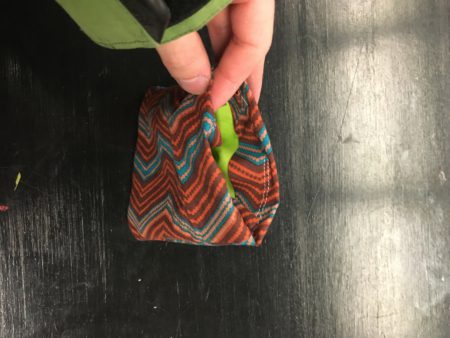 This really helped me get used to using the sewing machine again and helped me get into the sewing mindset. It was difficult during this to picture how to piece it all together and be able to pull it inside out in the end to form the actual bag, but doing this helped prepare my way of thinking for the actual project later on. I made a couple smaller mistakes on the bag where I needed to rip the thread out with a seam ripper, but overall it went fairly well.

Next up was the embroidery. I needed to embroider an image of at least three colors, including the background. I looked online for some logos to embroider and came across the Shell logo. One of my friends is going to be working there as an intern this summer, so I decided to embroider a patch with the logo on it for her. 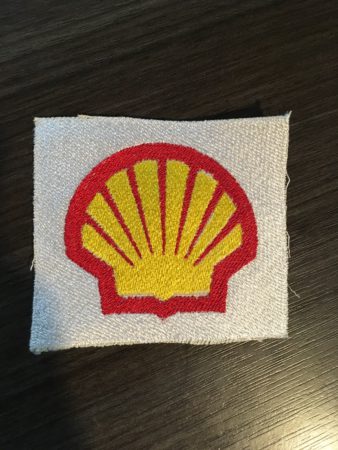 If you look closely near the bottom of the yellow section, there is a gap between the yellow and the red. I learned during this that if reinforcement parchment or other material is not used behind the fabric, this stretching of the fabric can occur and result in gaps like the one above. I also learned that embroidering the white background as I did above takes a long time. This was useful to know for the final part of this lab.

Lastly, I decided to create a Chain Chomp. I like Nintendo games and Chain Chomps have always been cool, so this sounded like fun to me.

Due to the design of the Chain Chomp, I had the choice of either creating the chain or the chomp (what I call the head) first. I chose to do the chain first, mostly because I thought it would be easier. It was not. 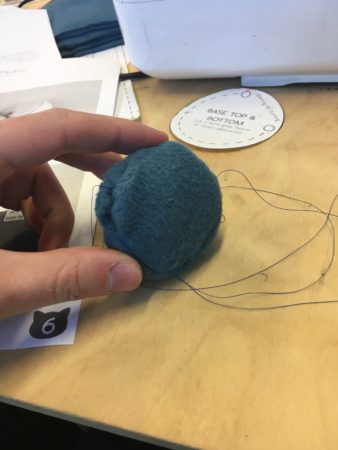 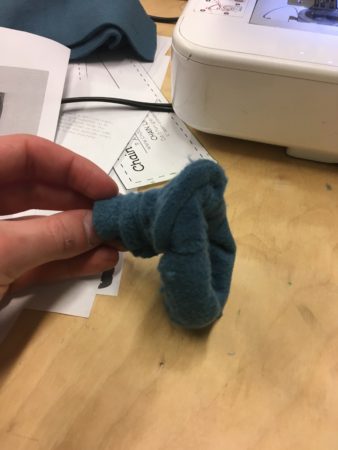 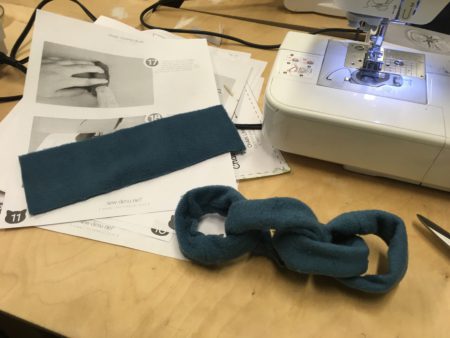 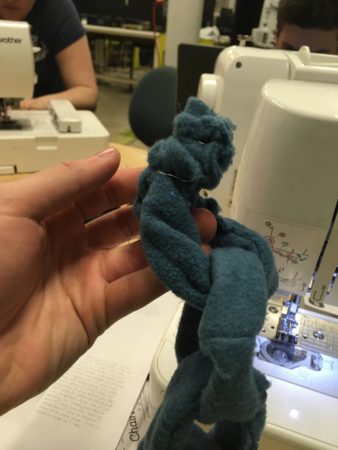 The end of the chain (in the first picture above) was easiest. It was just two circles and a ring connected together, stuffed with batting. I did have to ask Emilie for help in how to put them together because I still was not sure how to put it together in a way where it would be turned inside out and form the cylinder shape. After this part though, I was able to picture this process in my head much better for the remainder of the project.

The next part of the above images was the actual chain. The first chain was relatively easy. After that though, it all became quite difficult. Having to sew each ring together, while inside of another ring was a pain. I could only end up sewing about half of it or a little more with the sewing machine and had to hand sew the rest after turning it inside out. This resulted in most of the chains not looking great, but a couple of them still turned out good.

Next was the chomp.

I started out by cutting out the materials and brought them home. I then hand sewed the majority of the facial features onto the red and black football shaped cutouts. 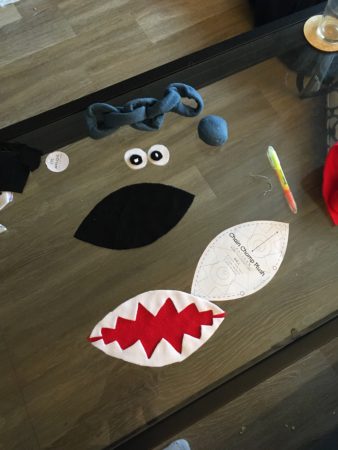 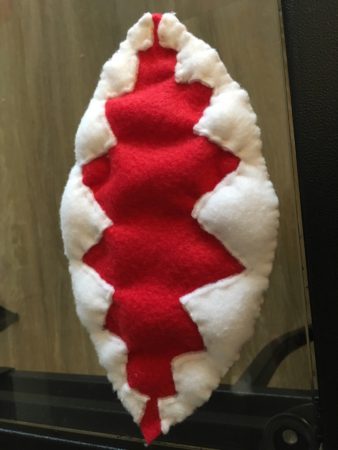 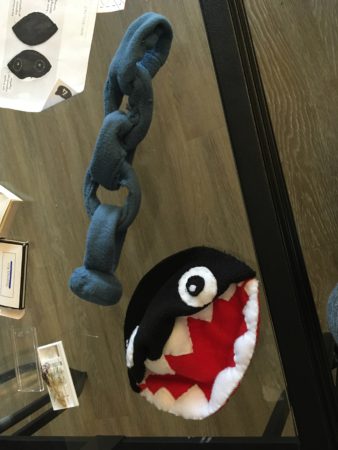 This turned out pretty well. I did have to teach myself some new ways to sew, as nearly everything I had sewn in the past had been on edges of material to fix things and I had little experience with sewing in the middle of an object.

Also in the above picture (last one), I have the chain completed. The instructions recommended to sew it with a ladder stitch, so I learned how to do this as well and it came together nicely.

Next was the embroidery. I decided to go with a Nintendo theme and embroidered a colorful logo onto the bottom of the Chain Chomp. Even though Chain Chomp first appeared on the NES, I decided to embroider the Nintendo 64 logo instead, due to the colors and that I liked it better. 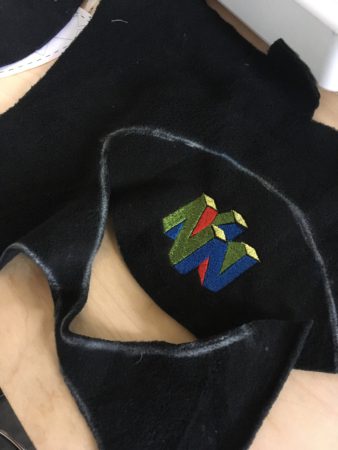 Even with the reinforcement for backing, it still stretched out a bit, but overall it looks pretty good. I did get some help from Duncan for this, and he said I would absolutely need reinforcement for the fleece that I was using. Also I decided to use fleece for this whole project partially because the instructions recommended it, but also because I thought it would feel nice for a plushie. 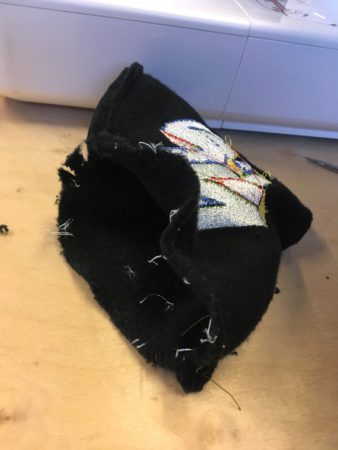 One problems that I encountered was when I accidentally sewed the two black pieces of the face almost completely together. I thought the instructions said to do this, but after turning it inside out through the whole I left, I found this was very wrong. I ended up with a small football with a N64 logo on it. I needed to rip out a lot of stitches here, so that I could connect these pieces to the rest of the face. Since the ripped parts are deep on the inside of the final chomp, it didn’t really matter too much. 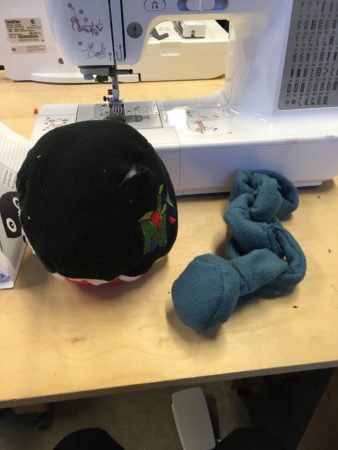 Once I connected the rest of the chomp with the sewing machine, I had the chomp and chain to connect to finish the project (plus the small hole on the chomp to hand sew). I did this at home later with my sewing kit, including ladder stitching the chain on, and it was complete. 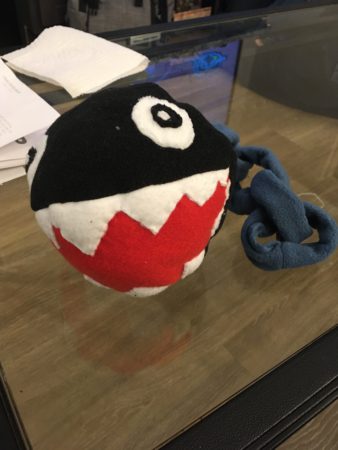