For the drawstring pouch, I decided to have a sky-blue gradient outside, with a bright green inside. I really liked the blue for its color, and my old backpack also had a distinctive neon green inner lining, so I thought it would be a nice tribute to that. 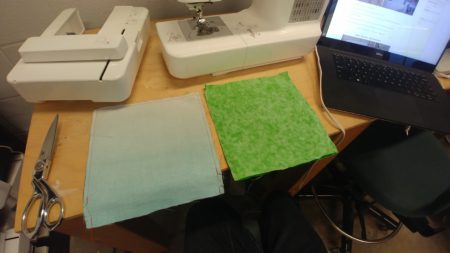 After cutting four squares of the fabric, I sewed them together. The blue fabric was attached together in-class, and I wasn’t paying too much attention to the fabric color. Red seemed like an ok choice since it’s a very visible fabric to work with in my novice hands, though I did regret that in hindsight. 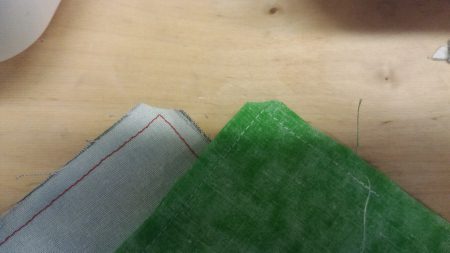 Then I attached the two pieces together and ironed the seam 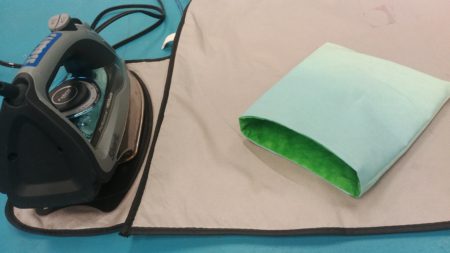 After making the stitches that made the “tunnel” I chose to go for a nylon yarn/ribbon for the drawstrings. To stop the end from fraying, I put a tiny dabble of hot glue on each end – and this is the finished product! 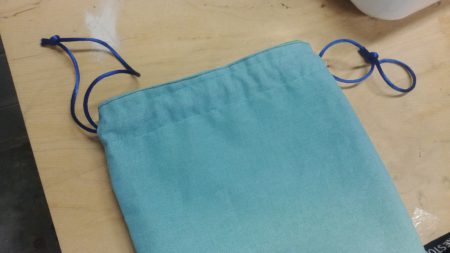 For the custom project, I thought I would go with a shiba cube, with the IPL logo on its side. IPL is an RSO that I’m a part of, and I thought maybe we could use a mascot!

We also have to have 4 colors, so that’s that. I also had to rotate it because, as you’ll see, the scrap piece that I’m sewing onto doesn’t really have the horizontal real-estate to fit onto the embroidery hoop otherwise, and I needed the embroidery piece to follow the fleece’s nap/stretch direction. 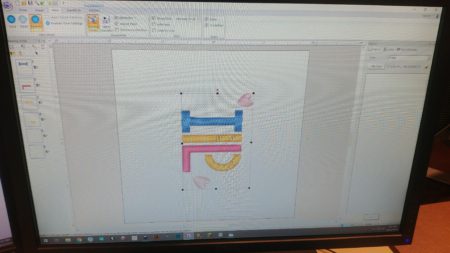 Embroidering! The scrap piece is, fortunately, just barely big enough to fit in the hoop. This is after the embroidery, and cutting out the needed section from the scrap. 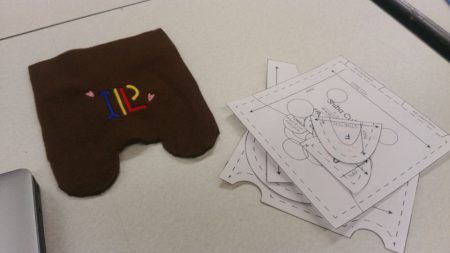 Continuing on, I began sewing together the face! This was my third attempt at getting the two pieces attached.

The first time, the brown piece slid much more under the sewing machine than the gray piece. By the time I got to the end of the seam, they’ve become misaligned by nearly a centimeter 🙁

The second time around, the stitch had gone way off the seam and began stitching into the brown fabric without attaching the gray fabric in some areas. I later discovered that it was mostly my fault for trying to do a much more difficult zigzag stitch on this piece, rather than a simple running stitch.

The third attempt came out perfect! 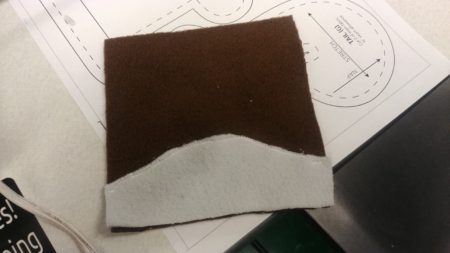 The aftermath of failures + seam rippers :'( 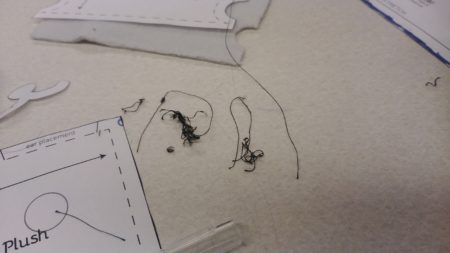 Stitching in the eyes, the right eye was my first attempt and came out perfectly with a zigzag stitch. The left eye was a failure, and it was at this point that I asked myself “why am I using a zigzag stitch?” The directions mention that it might be a more aesthetically pleasing choice, but is also more difficult. I don’t know why I thought I was ready for more difficult. So, the left eye’s (failed) zigzag stitches were removed and re-done with a much better running stitch. 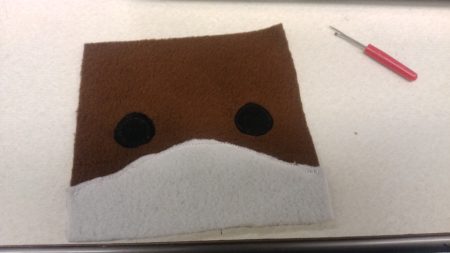 Then the eyebrows – this was my proudest applique yet! It was just perfect 🙂 Not using a zigzag stitch definitely helped insanely. 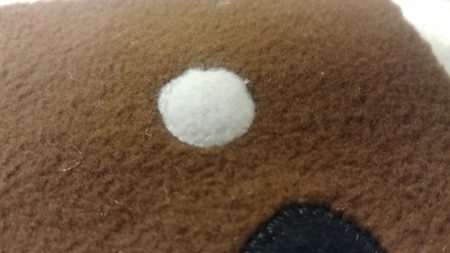 Look at it! It’s already so adorable and it was at this point I got incredibly eager to see the final product. 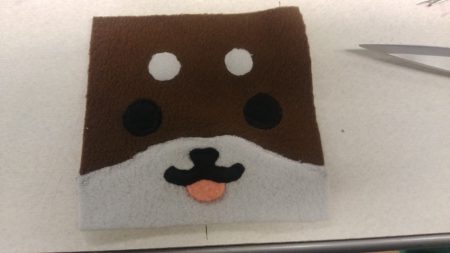 Sewing on the legs was probably the hardest part of the whole piece. Attaching a curved piece to a straight one after making cuts to stretch it, using thick fabric of the same color. Definitely could have gone much worse though. 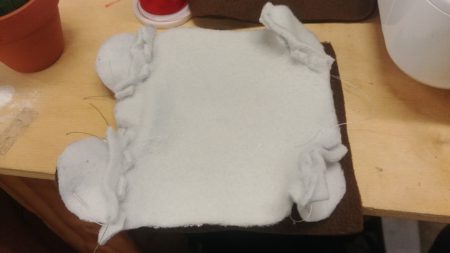 It seems like I skipped a lot of steps – because I forgot to take pictures – but this is after sewing together 5 of the 6 sides together, along with its ears! Then I closed the box, leaving it with a small hole for inverting and stuffing. While going through the edges, I was terrified that I would accidentally sew together its feet or ears to the body. 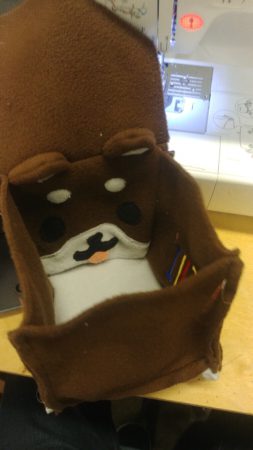 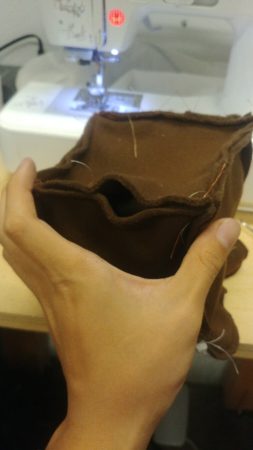 And then finally, here it is in all its glory! The corners were much harder than I expected (if you look at its foot, the corner definitely created some puckering/pinching) But otherwise, it came out so much better than I thought! 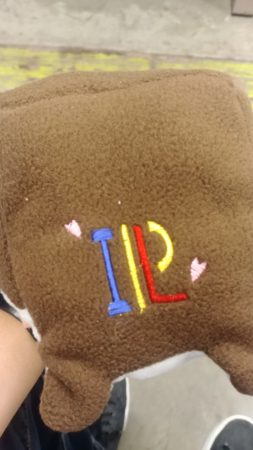 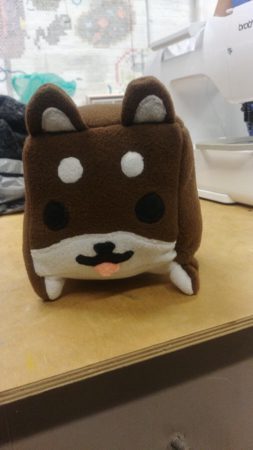 Although I’m 4 and a half days late on this assignment, I’m so glad that I got to create something like this. All the other assignments in the class so far felt like fiddling and tinkering – creating some sort of prototype or proof of concept. It’s a sort of making that I do really enjoy, but it’s hard for it to produce something that feels final and polished. This however, I know I’m going to keep around for a long time, because it genuinely feels like it came out so refined! And now I know how to repair it too!

And while creating it, I discovered the amazing and enormous world of sewing and embroidering. The number and types of stitches, techniques, fabrics, and realizing that each of these things all have their quirks and methods (before this project, all I ever knew was that fabric has a ‘bias’ that stretches. That was about it.) Best of all was realizing that all of these things are things that I can learn about, and learn to do.

This project, more than any other so far, has made me say: “Wow, I genuinely thought that I could never do something like this.”

I think this project genuinely and most fully embodies the essence of why I wanted to take this class. Laser cutting, electric cutting, 3D printing, and sewing were all skills or technologies that felt so far out of my reach. I figured that these things would take weeks or months to even begin to understand, and so never pursued learning them. But after seeing the course description, I realized I might be wrong, and I’m so glad to have been.

I think project was difficult, more difficult than any other project we’ve done. But, it was also my favorite so far.