So on my nametag I wanted to include some true art that was created by Squidward Tentacles. I always wanted a nametag that would also fit on my keychain since I always carry that with me.

I also wanted to include something that was related to Electrical Engineering somewhat, so I decided on including some wire nodes at the bottom below the artwork. The gradient feature in inkscape also interested me as I was curious to see how that would look on the wood. The following is what I intended for the nametag to look after it was completed (this is without the name). At first I thought I would like to have the features of “Bold and Brash”  be more defined. However, after looking at what the laser cutter produced, I am more a fan of the silhouette look of the piece. 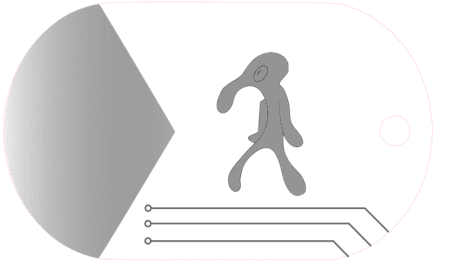 I originally had trouble getting inkscape to only fill a certain portion of the nametag (specifically talking about the gradient arrow part). However, after messing around with a few shapes and looking at online guides, I was able to get it worked out.

Overall, I am very happy with how the nametag came out. I am interested in seeing how different materials would change the look of it. I’d be most interested in seeing if there is a material that black, but when engraved gives a white look (maybe Black Acrylic?). I think that would look really cool as well.