This week we worked on creating our pom-pom bots!

We needed to use Arduinos again, which I was pretty unexcited about. However, I felt more comfortable this week because I got to experiment with a couple sensors last week. It was also a lot more interesting since we needed to create a physical object that could move, not just a sensor that could control how fast LEDs blinked.

My inspiration came from the Koi fish. I was initially confused on how I could make something that could move, and not just wobbly forward then backwards. I didn’t want something complicated like a foot so I looked up a video of how fish swim. It looked relatively simple, just two joints that move at 90 degree angles (see picture below). 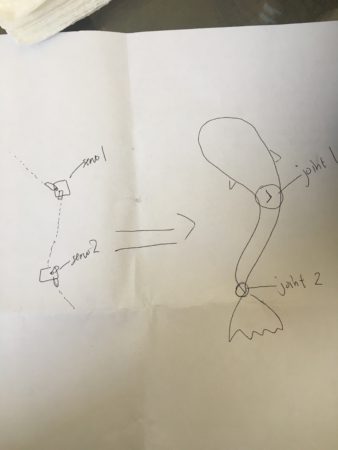 Looking at this design I knew what I needed for the basic materials: 2 servos and some popsicle sticks. 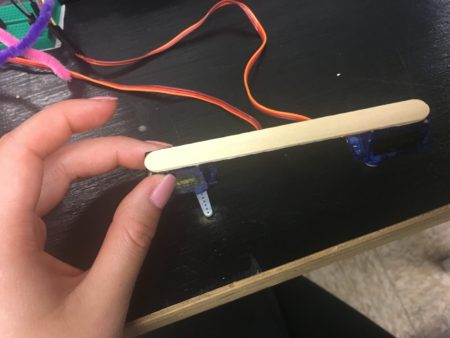 I wanted to build out the framework of my bot before aesthetics, so I glued together the two servos using a popsicle stick and then tested it. Unfortunately, even though I designed it to imitate a fish, the bot just wiggled back and forth and did make a net movement. I was pretty confused at this point because it looked exactly like a fish and it was designed to imitate a fish’s movement, but it wasn’t the same. I tested it by pushing down on the servos at different times to see if it needed friction or something to push it forward, and it turned out that if I push down on the servo while it moved it would take a step forward, so if I alternated pressures on the servos it made a net movement forward – exactly like a fish.

My second design was to add a third servo on the top to alternate putting pressure down. 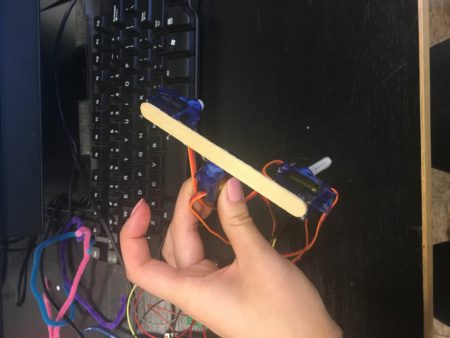 I added the servo in the middle to imitate a see-saw movement, where the servo would add more pressure on one side at the correct time to create more friction for the moving piece. Like my first design – it seemed good in theory but didn’t work practically. Even though it was theoretically adding pressure at the correct time, I didn’t take into account gravity or other things. My bot simply toppled over whenever it tried to move.

However, I had tested the bot my holding the middle of the see-saw steady to see if I had the correct idea, and it DID move forward. I knew I just needed something to hold it steady while it walked. 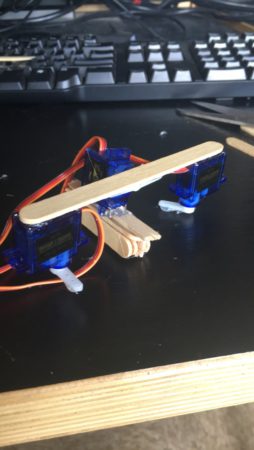 I added a bottom that attempted to stabilize the bot while it moved. You can see from the picture that it looks kind of like a see saw, but because I had to build this by hand the bottom wasn’t completely flat, and it toppled over anyways. 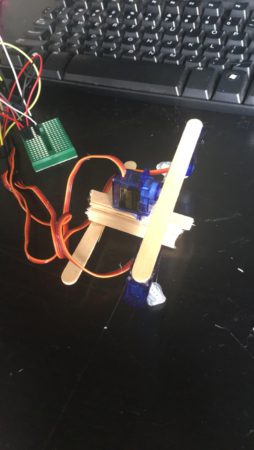 In this iteration, I added one more piece across the bottom of the see-saw, since a longer bottom opposing the movement the bot is trying to topple in would prevent it from falling. This solved the problem of balance, but because I had added so many sticks to the bot it was now too heavy to move. The servos couldn’t get enough friction to grip the table and pull itself forward. 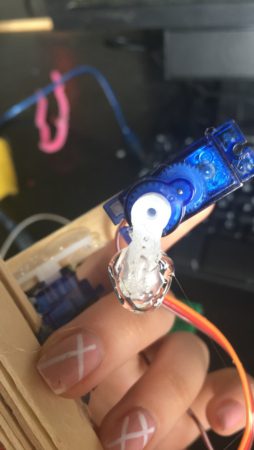 I solved this by adding glue to the bottom of the servos. The glue is sticky, so it would give the bot a better grip (kind of like a web for a duck).

I finished off my adding a head to the bot for design purposes, and I was done! 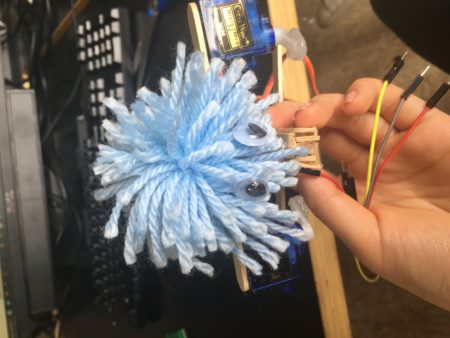 I learned throughout this project that designs never really turn out the way you want them to. I thought carefully about what I wanted my bot to imitate, but there were so many other factors affecting it that my designs didn’t really work. I had to continually add ONTO my designs to account for different factors. Each iteration addressed a different problem, until it could finally move.