Hello everyone, for my project this week I wanted to try and make a four legged pompom bot using only two servos. Many robot designs for each leg use multiple servos to better control the position of the leg. I originally wanted to create a robot that would stand up and walk. I realized, however, that it would have been difficult to stabilize it. As a result, I went for a one that would stand on four legs and move. The two front legs would be attached to a servo and the two back legs would be attached to a servo.

This was my initial design: 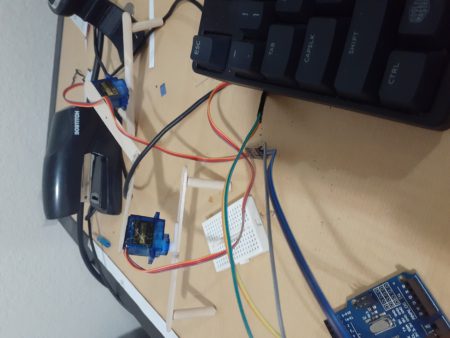 When I initially was thinking about how to create this, I looked up only and saw someone did a similar four legged robot and showed a video of it moving. What I found out was that the key to making movement with only two servos was the angled base, so I tried to mimic this with the Popsicle sticks and attached the servos to them.

This initial design was simple in order to test out the mechanism and see if it works out correctly. What I found out was that the wooden pegs for legs did not offer enough traction to pull the robot forward. As a result, I added some foam on the ends of the feet in order to make it move better. I tested it out again, but there still was not enough force to move the robot. 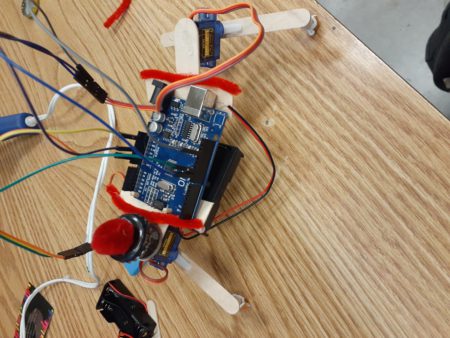 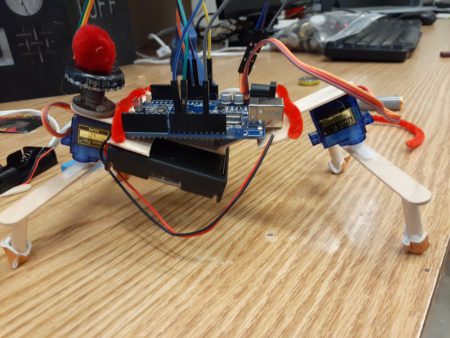 The main changes I made to it were that I added the weight of the battery back and the screw to the front leg area. This allowed to create enough friction with the ground to pull it forward while keeping it in place when it move the servos back into position. I believe if I more evenly distributed the weight I could have made it move forward when it was moving the servos back into position as well, but I am happy with how it turned out. This is a video of it moving:

Adding weight through the second iteration was able to make it move. I didn’t really have an aesthetic design in mind when I was creating this, so I just ended up putting some of the puff balls and a bottle cap nears its front to make a head.

Overall, I had a lot of fun tinkering with the different aspects of the robot to get it to move.