Last week when we started designing our bots, I just doodled a snowman (Christmas may still be on my mind) and thought that it would be interesting to make something that doesn’t have feet move. The most a snowman could do if they could move would be a waddle, so I tried to replicate that throughout this process. Here’s my initial design: 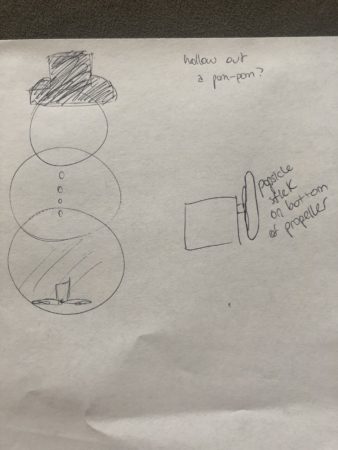 I thought at first that it would give better traction to have the propeller stand on popsicle sticks, but once I tried this the whole thing either collapsed or didn’t move at all. I also thought along with this original design that I could hollow out a pom pom to fit the motor inside of it. Once I got to constructing, this also fell apart since I realized pom poms aren’t that big nor is it possible to hollow one out.

My first prototype was just the base of the bot with one motor that would be the primary movement and a ring of pom poms around the motor. I played around quite a lot here with the code to make it move the way I wanted. If the motor moved too fast or slow to go back to its original position, it would reverse the movement just made so I had to find the perfect delays and angles that the propeller would go to in order for it to move properly.

As seen above, I just did random colored pom poms for my prototype since there weren’t many white ones and I wanted to save those for my final design. Moving on, I had to decide how I would build the base up with another motor and the pom poms surrounding the entire thing. Pom poms were working pretty well, I just had to be careful about my placement of them so they would not interrupt the movement.

Once I had the primary motor functioning properly, I had to add my second motor. I wanted it on top of the previous one since it would be the least likely to interrupt the movement of the base. I didn’t want to glue the motors together obviously, so I took some putty and sealed the two motors together temporarily. The code for the second motor was easier since it didn’t effect the movement of the entire bot too much, but there was still some playing around that took place in order for it to be correct. It looks a little spastic, but I had to program it a little strange so it wouldn’t hit the pom poms as much as it could have.

Overall, I was trying to create a snowman image with my additions. The motor ended up being a broom made out of pipe cleaners, and I experimented with adding more pom poms in order for it to appear like it had three tiers, each smaller than the last.

After I had worked out the kinks with the code, my final bot design was focused on the look of it and how it moved with the extra weight on top. I got a bunch of white pom poms and hot glued them together to create the closest image of a snowman I could. I couldn’t glue the entire thing together, or else I thought I would damage the motors, so the top part is just stuck on top with some more putty and a paperclip as support. The bot definitely moved slower that it did without all the other additions, but it can still move from point a to point b – just a little slower than it did before. Overall, the final bot was not too different from my original concept, I just had to adapt to changes and be creative about fixing problems. While programming and crafting as not new to me separately, I had never done them together before which was a really interesting experience and it occurred to me just how much you can do with simple technologies like this.