Initial Idea: My initial idea was to make a caterpillar like bot that moves by rapidly shaking back and forth. The design can be seen below. 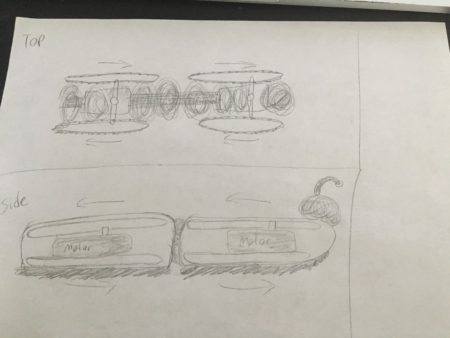 In terms of materials I wanted to use pipe cleaners for the bottom so it could grip onto the table and move. Then I would use paper, popsicle sticks and balls of fluff to make the remainder of the body.

Prototype: Before I started creating the the entire design I wanted to make a smaller prototype to test if the movement I want actually worked.

As can be seen in the video the bot did in fact move, technically. It was able to shimmy across the table ever so slightly. Even though my concept would technically work, I decided to try a completely different approach to the pom bot entirely since I wanted the bot to move in a more fluid way. I also found that in terms of code this prototype would only move if the motor was programed to run at a fast speed, with this in mind I also wanted to make the next prototype able to move with a lower motor speed. 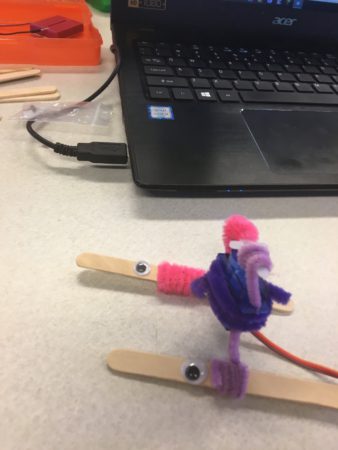 To my surprise this bot worked much better than my first prototype and was able to move at a variety of motor speeds. The only issues I ended up running into with this prototype was legs becoming separated from the motor, to help mitigate this I wrapped a pipe cleaner around the servo motor itself to keep the legs close to the motor even if they fell off of the propeller. The bot in action can be seen below.

Comparing this version to the first prototype, it is easy to see that the movement is much smoother. With this in mind I felt that overall this design was pretty close to where I wanted the final product, the only improvements I wanted to explore was making the legs more stable and find a way to get the feet to not cross over each other as much.

I unfortunately did not have the time to completely finish the idea of my final pom bot. However, I do have an image of how I would have gone about stabilizing the feet.

While I didn’t get to test this with the motor, I feel like having one or two piper cleaners attached to the feet would help make the bot shake less violently, which would also help in keeping the bot together.

In terms of the locomotion the first  bot just kinda spun in place and slightly shimmied forward, whereas the final bot actually moved forward with a very janky form of walking.

I was surprised how I made a pretty specific drawn concept, however once I actually got the hardware and started working on it I quickly threw out my initial idea and designed something very different. With this in mind for future projects, I should create more than just one initial idea so I have more to work off of if one of the ideas doesn’t pan out.