This week I decided to make a penguin pom bot. I used a plastic cup, felt, eyes, and pom-poms to create my penguin. At first I was confused about how I was going to build the penguin’s feet but I decided to use orange pom-poms to create the feet. I attached servo motors to both the feet to get the motors to start rotating and for the penguin to start waddling. I decided to create a penguin because I thought about how two motors would move if put on the legs of a pom-bot and it was intuitive that the motors would waddle like a penguin. In my code, I first had both the motors rotating the same amount but later I changed one to rotate and twice the position in the for loop to get it to walk forward. For my iteration, I made the pom-bot look like a girl and made the movement of the pom-bot faster. My motor had stopped working the second time I came to the lab, so I had to switch out the motor as well. I removed the motor and pulled out the wires of the motor going through the back of the penguin out from the bottom. 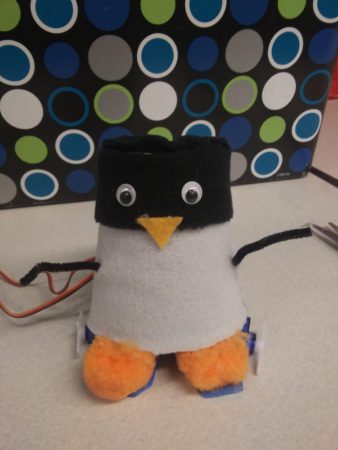 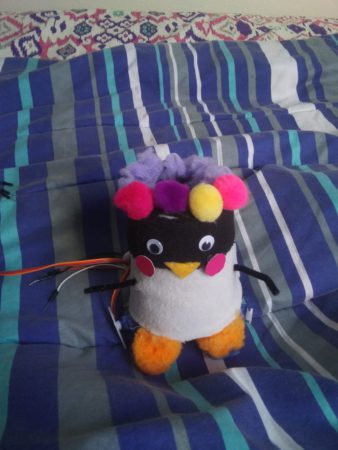 Here is a video of my pom-bot moving after my iteration:

This was one of those assignments where I did not think too hard about how I was going to use the materials to make my penguin but had a vision and was flexible with using the materials and try new things with the materials. I was very confused about how I was going to make the feet but then I just used pom-poms. There were a few things available and I learned to make the best of them in this asssigment. I wanted to make a penguin because penguins are cute when they waddle and in my head, I could see the motors making the penguin waddle. Previously, I had a plain looking penguin but I wanted to look more like a fun, girly penguin so I enjoyed making it prettier. I also tend to have the idea in my head that if something is damaged, it can take a long time to repair it like with my motor but it was rather easy to replace and reattach the motor in retrospect, so even though it seemed hard and time-consuming in my head, in reality, it wasn’t as hard or time-consuming I learned to understand. This was my favorite assignment and I am quite proud of how my penguin turned out. I had some idea about how I was going to make the penguin move so when I saw it move for the first time, I was very happy. Maybe if I had more time, it would have been interesting to see how the movement would have been made to be different if I changed the positions of the motors.

/* Sweep
by BARRAGAN <http://barraganstudio.com>
This example code is in the public domain.