This week in the maker 490 class, we continued our use of arduinos and created a little mini robot called a pom pom bot. I looked at some of the examples of ones that had been made in the past, and from what I saw it looked pretty straightforward and relatively simple. Unfortunately, I was sick the day we were given this assignment, so I was at a severe disadvantage as far as knowing where to start or what exactly to do.

I started by just getting the servos to move, so I downloaded the simplest servo test code for arduino I could find and uploaded it to the board. Then I knew that the board was supposed to be sending the right information, but I didn’t know how the servo connected to it. Looking at schematics on the internet, it appeared that the three wires were positive, negative, and a wire that received information as to how to move. I didn’t know which ones were which on my servo though, so I had to try random configurations. It took a little bit of time, but I got it, and my servo started moving. To get two moving, I copy and pasted much of the code and added ”2″ to the end of the variables, and assigned them to write values to a new pin on the arduino. This was encouraging, the code was much simpler than I had imagined it would be, and I was glad I got this far. The actual design of the thing took more time.

From the example videos, I had seen a pom bot that was very simple and was really just two servos connected together and two popsicle sticks. It walked very awkwardly and lopsided, but it did work. I was inspired by the minimalism of this design and decided to try something similar, so I connected two servos directly together. I then attempted to attache popsicle arms to the servos, and quickly learned that attaching popsicle sticks to a servo and telling it to move did not equate to a walking robot.

This phase was the most frustrating part because it seemed like whatever I did, it did not work. Originally, I had attached short popsicle sticks as arms, about a half an inch, and then put big flaps of tape on them that looked like fins. The idea was to be kind of like a seal, that uses its fins to flap forward. This might have worked, but the servos were always moving backwards to reset themselves at their original starting position. I tried to overwrite this in the code, and get them to move 360 degrees continuously, but it didn’t work. I tinkered with this design for probably too long, trying to get it to work and running into more and more problems. At one point it seemed like it could work, but it kept flipping itself over. So I attempted to make “braces” for it, which were just more popsicle sticks that were supposed to stabilize it as it pushed itself. Ultimately, this didn’t work out, and at this point I was about to run out of time. I had 15 minutes left at the fablab, and the project was due the next day. I couldn’t work on this project at home, because the arduino board wasn’t a true arduino board and it wasn’t compatible with my macbook. At this point, I felt pretty lost, like I just wasn’t going to figure it out.

I decided to start fresh with my design, and attempt a more ‘bug’ shape like I had seen. I started by attaching the servos together with two popsicle sticks, so that they were more spread out. This would be the body, and one servo would control the front legs, and the other the back legs. The original reason I had avoided this style, is because it seemed sort of complicated as to how to design the legs. Especially with just using popsicle sticks. I wasn’t sure what to do about them. What i did was just attach a popsicle stick flat to each servo. This made it look like a pair of skis, and when the servos moved, they moved back and forth in a bow tie shape, but because it was flat, it just sweeped the ground and did not move. I adjusted the code at this point, because the servos were moving 180 degrees and their popsicle sticks were whacking into each other, so I made them move much smaller, like 30 degrees. I made the back one move twice and the front one move once, hoping that the offset would help push it forward, but it did not work either.

At this point, I really had to pack up and go, and I was really discouraged about the whole thing. Some of the other bots I had seen designed by other students, were really cool, and decorated really nicely. I was frustrated I couldn’t get mine to walk, and I felt like the aesthetic of my bot  looked terrible, just a bunch of popsicle sticks taped together, it looked far from a finished piece like the others.

The next day after class I decided to work on it some more. I wasn’t sure what I was going to do at first. I grabbed some materials at random out of the craft drawers. I grabbed a bag of clothespins without knowing what I might use them for. I had originally wanted to make little feet for my bot so far, so that it wasn’t laying flat on the ground. I started clipping the clothespins on in random spots, until all the sudden I 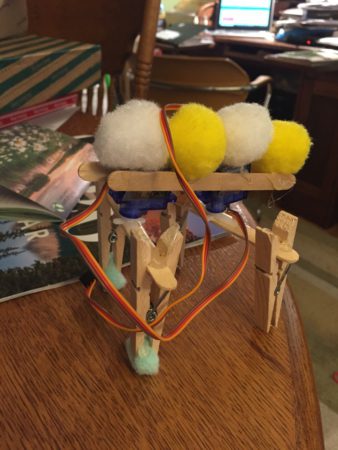 realized that I could simply attach the clothes pin onto the popsicle sticks I had and it would act as a leg. After that, I put some hot glue on the bottom of the back pair of legs, to give it some grip. I also attached some pom poms at the bottom of the front pair of legs, to help the front slide. I was hoping that the back legs would grip and push the front ones. I also tilted the back legs at an angle which helped seem to push it forward a little.

All in all this project was actually really fun. I wish I had known a little bit more about what I was getting into before I went into it, but sometimes you gotta just figure it out. I underestimated how much it would take to get the design to actually walk. I’m glad I grabbed the clothespins, or else I may not have ever figured it out.