This week we learned how to program Arduinos and use them to operate inputs and outputs further than the previous week.

In class, I created this squirrel with a wagging tail by manipulating the delay sequences in the Arduino itself. I was pretty impressed with the overall result, considering it only took me the class period to finish it, and the servo was built right into the animal. I think it was a great introduction to using motors in the Arduino application. Here is a video below.

From then on, we were tasked with creating something that utilized more than one motor, to create a pom bot that utilized many motors and moved in a similar fashion to an actual living creature.

This led me to think of some intricate movement, and an animal that I really like is the penguin. I thought to create the waddle was something that could be achieved with servo motors so I decided to go for it. I looked up some pictures of penguins online and the waddle they do involves lifting their feet ever so slightly off the ground. I thought that this could be mimicked using a total of 4 servos acting as the legs, and the Arduino over-top of the servos acting as the torso. 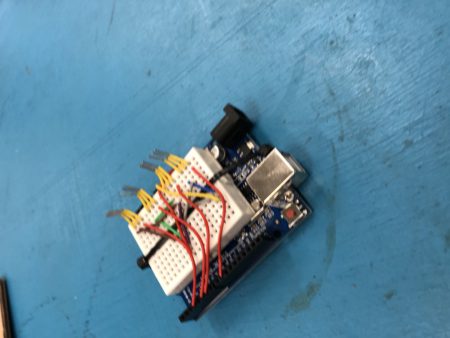 The circuitry involved in this was pretty straight forward, but I chose to make it as compact as possible by zip tieing a breadboard atop the Arduino and using breadboard wires so the entire torso was as flat as possible. I also liked the breadboard wires better than the traditional pin wiring that came in the kit because they seemed to have a better connection.

As you can see in the diagram above, I wired a connection for 4 servo motors, wired in parallel using the breadboard. This was very intuitive, and unlike the Arduino where ports matter, a breadboard is free to interpretation so long as all the wires make it to their respective rows.

From then I decided to get started on the lower portion of the body, which was 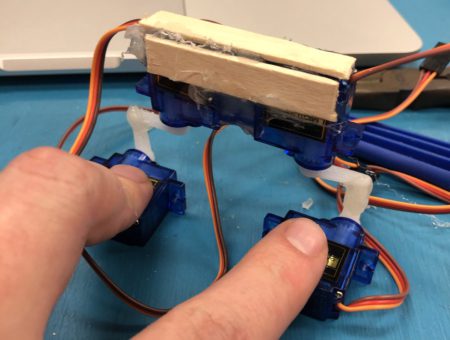 glued together upside down and to a popsicle stick that I could fuse together to the bottom of the Arduino enclosure.

As you can see they closely resemble hips and legs, which is exactly what I wanted.

Preceding this, It was important that the servos were all fused together as sturdily as possible. 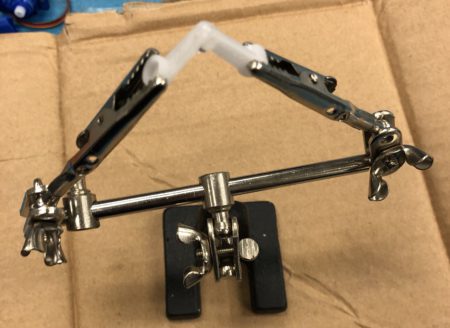 To make sure there was a strong bond between the legs, I used the helping hands and first applied superglue which took forever to dry.

I thought the superglue would be thicker, like hot glue but it kind of just bonded the small surface area of the two points together to a small degree.

I decided to go over the joints with hot glue to ensure that they would maintain their rigidity during movements.

From the title of this video, these legs clearly were not the best for this case. 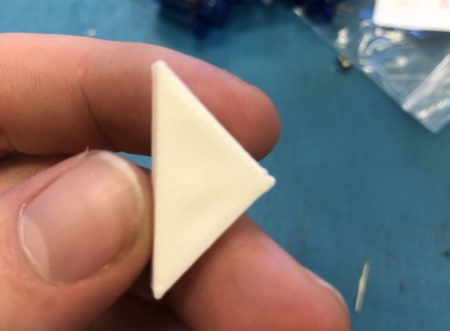 So I thought about it further and decided the best course of action would be to utilize the 3D printer to make a triangular part that could connect both of the servos together, forming a rigid bond. 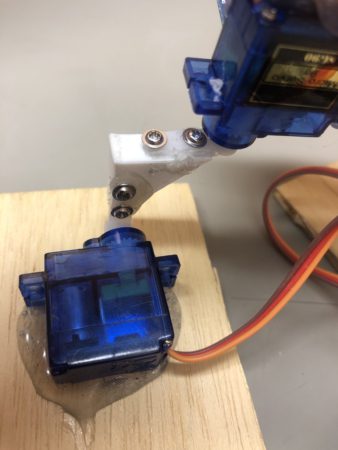 And this is how the legs turned out after-

From this rigidity, I was able to make more forceful movements to propel the penguin forward 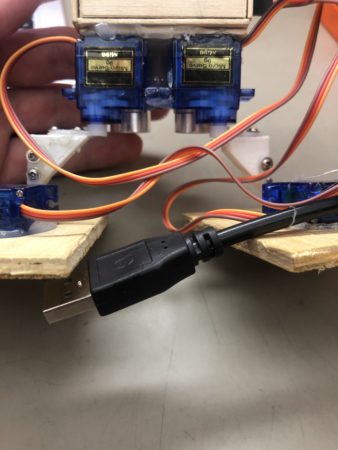 The legs were fully capable of holding up the entire Arduino from the bottom, and it was even balanced without really even trying.

Here is a video of the bot walking. Pombot action

I loved this unit the most so far, it was really fun to create something that actually runs off a code that you can manipulate, and especially to see what you can do with so little in terms of money. I thought the things that were most important in this unit were understanding how to build the overall bot itself, to be efficient and strong standing. From the building, all aesthetics can be added on after the fact.

What I would do differently

I think the possibilities with Arduinos are absolutely endless, and getting caught up in the minutia of the technical aspects is very easy to do when you are manipulating something that involves so many ins and outs. I would definitely take more time to plan out what exactly I wanted to accomplish in my time at the lab and work on tighter deadlines. I think that had the setback of the broken legs not set me back, I could have utilized the 3 hours I spent making the first legs into 20 minutes using the 3D printer which literally took 3 minutes per triangle. If I had that extra two hours, I would have been able to make my bot really stand out, I would have used black fleece and could have sewed a working body around it. I think my main distraction, in this case, is not utilizing my time outside of the lab to devise better plans on how I want to get the projects done on time.