This week’s project was to build a multi-color vinyl sticker. I was initially looking for a nice sticker to put on my laptop, but I was struggling to find any given icon/logo/etc. that I felt was representative of who I was.

My phone (Pixel, first-generation) has a white panel on the top 1/2 of the back of the phone. I usually use a clear case with this phone, so I felt that this would be a great canvas to place a sticker on. 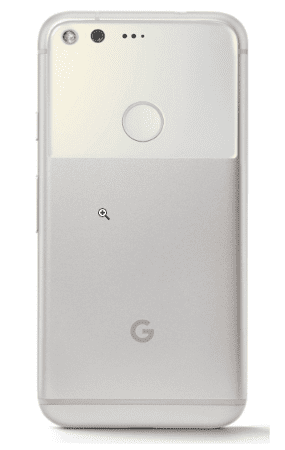 Reference image for my phone

I wanted to go for a sticker that fit the space I was putting it on, while also having a bit of artistic work. I considered going for a logo that represented my background in PC Gaming, but finding a multi-color solution for that proved difficult. After searching across google images, I came across this artwork: 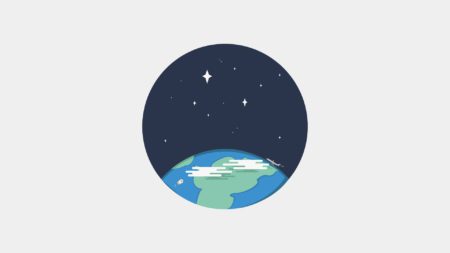 This image was a great place to start, as it had 4 colors (black, blue, green, and white) while also being easily manipulated into something that could fit my phone. I also felt that this image would give me some interesting challenges to overcome, such as removing the plane/spaceship, cleaning up the starscape to be compatible for cutting, and removing the subtle shading that persists on many elements of the artwork.

I’ve worked with photoshop in the past, although Inkscape/Vector images proved to be a bit tricky to work with at times, especially when I wanted to create a smooth, rounded edge on the earth across multiple layers. I resolved this by just creating an earth-shaped circle and using the Path->difference tool to ensure all layers could fit together.

There were a number of alterations made to the artwork:

Originally I planned to use white vinyl for the clouds and stars, but I then realized that the backing on my phone was already white, so I instead used this as an opportunity to design my piece with this in mind, resulting in cut-out holes for the corresponding clouds and stars.

In order to ensure this sticker would fit my phone, I went to work on measuring out a lot of the dimensions on my phone, and recreating it within Inkscape. This way I could test to see how well my sticker would fit and make any necessary adjustments, while also giving me the ability to just use the Path->Intersection tool when I was ready to cut out the artwork to fit on my phone. 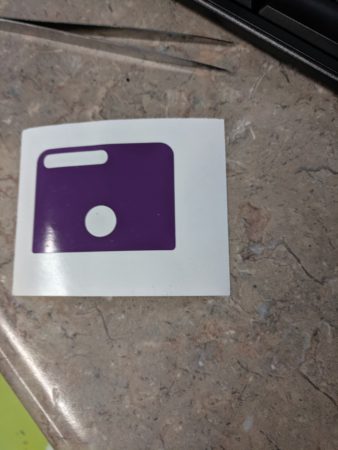 Version 1 of the phone cutout. The top-left hole for the camera proved to be a little too high up, so I lowered it by 0.5mm for the final version.

In hindsight, I definitely would have considered using a more precise tool to find the proper dimensions on the phone instead of just a basic ruler. Luckily, my sticker turned out to match up with my phone quite well! After making some minor adjustments, I setup the artwork for cutting and went to work on creating the sticker. 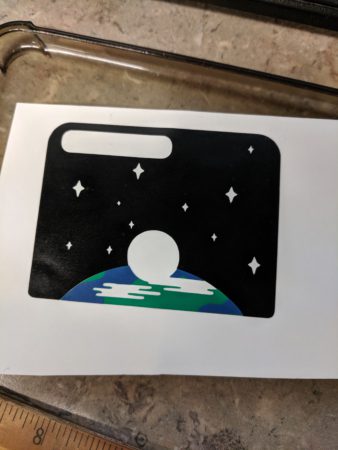 The sticker, shortly before transferring to the phone.

Attempting to line up the earth elements against the black background proved difficult, but the clear transfer tape was very helpful in ensuring success. Also, one of the members of the Fab Lab recommended that I use small pieces of masking tape to pluck out the small holes for the stars, which saved me a lot of time and effort. 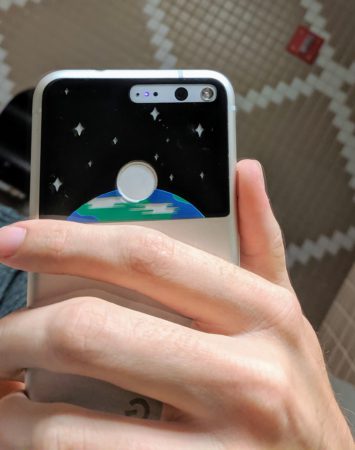 The final version on my phone, which is photographed against a mirror because I managed to make a sticker for the one place that I couldn’t just take a picture of normally!

Overall I’m quite happy with how this sticker turned out. I think the only major flaw in this design was that the white cloud on the left side of the image above results in a cutout that bleeds onto the area of the phone’s fingerprint sensor, which doesn’t look as good as I was hoping. If I were to adjust this piece, I’d work on either moving/deleting that cloud in particular so that the entire sensor area is surrounded by the vinyl sticker.

My roommate was excited about the stickers I brought home from the previous lab session, so I made a laptop sticker for a silhouette of his choice: 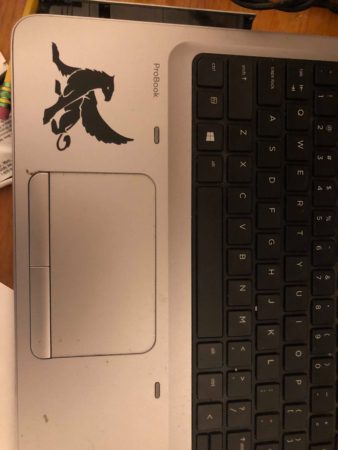 I was suprised by the difference in the amount of effort it took to make these two stickers. My phone sticker took upwards of 3 hours, but it only took my 3-5 minutes afterward to make the single-layer sticker from start to finish. I’d imagine with an easier piece I could bring down the production time for a multi-color sticker, but for now, I’m going to stick to making stickers for friends that want a single color!