I’ll start with the in-process pictures and go from there. Here was the state of my project in early December: 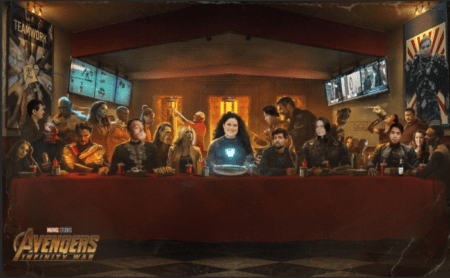 This is the version of the poster that I printed and presented during Wednesday’s project demo:

And here’s a link to the imgur album that I used during the demo to show my process of photoshopping Scott:

At long last, here is the link to the “final” version of my photoshop project. I’m using quotations here since I’m of the opinion that there is always room for improvement, but in light of my learning goal of avoiding perfectionism(which I’ll discuss later), I think this project is in a finished state that I am more than happy with.

I’m linking some of these images externally since the full-res file is 75MB, and google has a good way to see the full quality of the image when it’s hosted on their site.

Overall, I found that one of the main challenges I faced was finding time during the weeks leading up and through finals. I’m pretty good about scheduling my time, but I had a lot on my plate so I often had to squeeze some hours into this project before bed or between classes. I also found that the quality of the reference photo I received made a huge difference in how easy it was to implement into the project. Simple and contrasting backgrounds made cutouts much easier to set up, but also the color and intensity of lighting made a big impact on the final image as well.

I think I’m most proud of my work on Michal (the guy blowing bubblegum on the left side of the image), and Ted (the guy drinking a particularly large bottle on the right side of the image), as the color tones matched well and felt very integrated into the project. I think the biggest compliment I received while working on this project was that someone who was initially seeing my work didn’t realize at first that Ted was even photoshopped in! I also think I did a good job on photoshopping Gamora (the green woman), since the color tones fit well and I was able to build on my experience with Scott’s face swap to produce something that I felt was high quality in a relatively short amount of time (I think I got that one done in under 30 minutes!).

Learning Goal 1:  Learn the basic / intermediate techniques of compositing in photoshop, and utilize these techniques to produce a poster that is cohesive

I was surprised to learn how many different tools and techniques can be used to get the results that I want. I think there’s a level of mastery in photoshop I hope to achieve in which I’m not just using the tools that can get the job done, but I’m also using the tools that get the job done the most efficiently. For example, I didn’t learn until the near-end of the project that there was a special photo filter that could make images more orange / blue depending on my preference. Since the reference image for the project has a lot of orange light, this made my job a LOT easier! What used to take 4 adjustment layers across 15 minutes could now be done with 1 layer in 2 minutes with this photo filter.

I also learned a lot more about efficiently cutting out people from images and learning how to use better practice for organizing my project in general. Back in high school, I would use the eraser tool to cut people out, but this is a destructive action and therefore it was much more difficult to “un-erase” something. For this project, I wanted to do things right, so I made very liberal use of layer masks to accomplish the cutouts I wanted while still maintaining image quality and accessibility.

Learning Goal 2: Understand the complexities and concerns with making an image for a poster

I have never worked with posters before, and learning about their high-quality prints put a whole new emphasis on maintaining image quality that I hadn’t dealt with before. Overall, I think I did a good job with image quality given my limitations. My original reference photo of the avengers was not a high quality as the poster I wanted to print, but photoshop’s built-in image upscaling technology did a pretty okay job making it work. I contacted the original owner of the image to see if I could obtain / purchase the higher-resolution version of the image, but unfortunately I never got a response. I’m very thankful that we live in an era of phones with great cameras, as every reference photo I got was high quality and looked great in the final poster.

Learning to use the poster printer was also a bit tricky at times to get the correct formatting, but I was able to get the help of people at the Makerspace to assist me in understanding how the poster worked and what settings to use. I think at this point I’d feel good about taking care of a poster print on my own now!

Learning Goal 3: Balance time spent on the project to ensure completion and avoid the goal of “perfection”

This goal was probably one of the more difficult ones to achieve, but I did a good job of accomplishing it. I started the project with 10 people initially, and as I made progress on getting reference photos and implementing people into the project, I carefully assessed whether I wanted to add more people until I got to the final amount of 20 people. Some elements of the project didn’t look quite right to me, but I often assured myself of the fact that some changes to the project would take a long time and have a very minimal impact, so I chose not to focus on them. Once I had all of the faces implemented, I worked on adding some additional elements and decided to call it a day. While I’m sure I could spend another 100 hours getting this project to perfection, I feel confident that I’m happy with the work I’ve created thus far and can move on to something new if I choose to do so.

In light of the learning goal I just mentioned, I think the most significant thing I’ve learned is accepting that I’m a novice at most of the areas that we worked in across assignments, and that I can feel accomplished and proud of my work even if it’s not the most glamorous or perfect result. I felt very prone to mistakes while working on textiles in particular, and even though the head of my fox kinda fell off a week after finishing it, I’m proud of the effort I put into it and how good it turned out looking despite it being my first attempt at textiles since my middle school sewing class.

I think this course has spurred my to think about myself differently. I feel much more empowered in regards to the different creative outlets I can take advantage of, and I also feel much more open to try making something new in order to learn a new skill or solve a problem that I used to think was impossible to get done myself. I think overall I would consider myself a maker, it terms of the fact that I feel that I have the capability to make something myself instead of just buying something from amazon.

People can call themselves whatever they want, but I think I’d say someone is a maker if they choose to engage in any sort of DIY or tinkering project that they feel personally invested in.