When I first initially started this project, I had some inspiration based on the example name tags that were seen during lab. However, this was my first time using Inkscape along with the laser machinery so in the end, I decided to keep the design simple.

While using Inkscape for the first time, I was kind of confused on how to use the program and how exactly it would print out the image. However, after playing around with the program and seeing the laser, I got the hang of it and designing became slightly easier.

Since I love eating chocolate, I chose to base my name tag around a chocolate bar. To spice things up a bit, I replaced the “O” in my name with a pumpkin because I was born in October and Halloween is my favorite holiday.

During the lab section, we briefly talked about raster vs vector. I was mostly leaning toward keeping my name tag using the raster method, but I was still curious of how the vector method would turn out to be. So in the end, I decided to use the vector method on my little California state image. I was fairly shocked at the precision of how the image was cut out.

In the end, the overall name tag came out pretty amazing. Even though the end design is very simple, it was personalized by me making it pretty awesome! If I were to make a revision on this project, it probably be to make it slightly larger and use the raster method on the whole name tag. 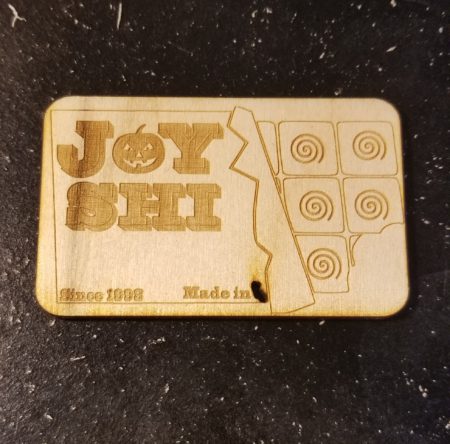