For my final project, I created a board game: Radical Robots! The main idea behind the board game was to create a game that caused players to need to make a lot of decisions and estimations of the odds to succeed. For this game I needed a large board, a number of tokens, trackers, and finally the meat of the game which consisted of almost 200 cards, with around 60 unique ones. A large portion of my time was spent developing the cards, but in terms of the physical product, here are some in progress shots: 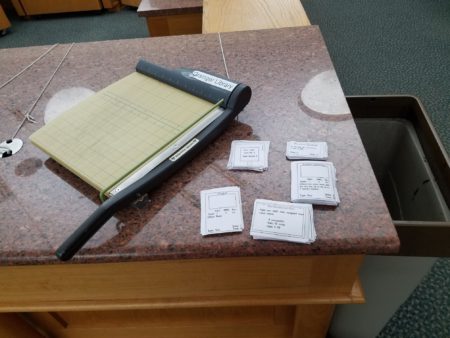 Here were the first prototype cards I made 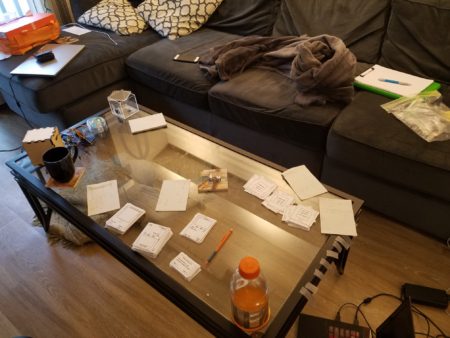 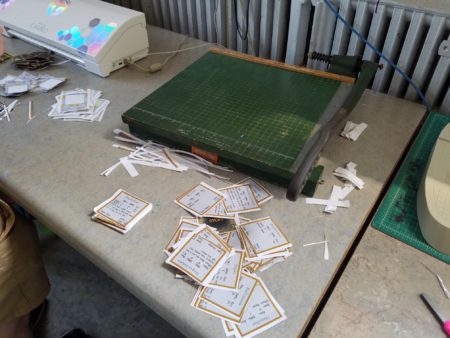 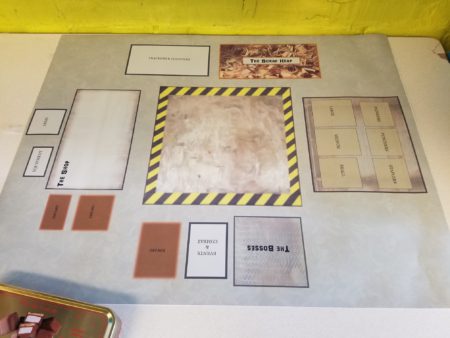 Printing out the board proved easier than I’d thought, and it came out perfectly on the first time 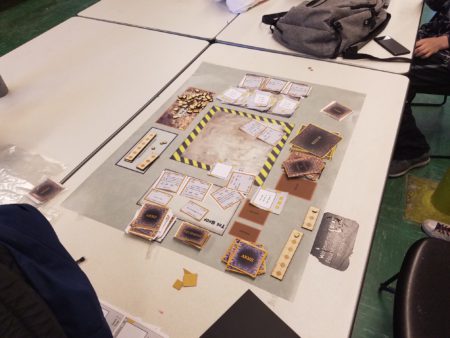 Here is the final project all together during presentations

I’d say the most difficult part of the process was, ironically, the parts I’d initially thought would be the easiest, which were the printing of the cards and cutting out the tokens. For the cards, I wanted to originally use a sturdier material than plain copy paper, so I initially tried to find card stock, but we didn’t have any white card stock. I tried to print on black card stock just out of curiosity, but that didn’t work. I also tried photo paper, but that only prints on one side, and thus doesn’t work for cards. Finally, I resigned to using copy paper, with some example mock ups with a piece of card stock sandwiched between two pieces of copy paper. Additionally I had some similar issues using the laser cutter with two sided acrylic, and ended up switching to wood in the interest of time. Overall I’m pretty proud of my work, especially with the design of the art on the board and the back of the cards, and also the fact that, despite the sheer volume of rules and complexity of the game, it’s pretty playable.

For this project, my two main learning goals were one: “to learn how to use the poster printer to make a game board, and also how to use/design smaller objects with the laser printer since I’ve only done larger pieces so far.” and two: “to learn about game design and playability from the perspective of a creator instead of a player.”

For my first learning goal, I learned both the goals with ease. The poster printer was far easier to use than I had anticipated, as it turns out it basically functions like a normal printer, just on a larger scale. The smaller objects in and of themselves turned out fine with the laser printer. What the actual issue turned out to be was the material I used, as mentioned previously. Most notably, the settings for the double sided acrylic on the universal cutter are incorrect for 1/8″ material, and it would have required a lot of tinkering to get it right. For printing, ironically enough I learned more about printing cards on normal printers than I did for the poster printer. Most notably I learned how utterly time consuming prepping card pages for printing is, since both back and front pages must be aligned, and to get the right card ratios for balancing, it required almost 50 unique pages to be printed out, some multiple times, others only once or twice. I learned a lot about working with Inkscape as well, since I had to make all of the borders and back art for the cards, and then also all of the design for the poster. One major effect I learned was color correction of external images by overlaying a box over the image and turning down the opacity, allowing me to change the color and visibility of the picture to my liking. As I said previously, I’m especially proud of how these designs came out.

For my second learning goal, I’d say I learned quite a bit, but not as much as I’d hoped. I was only able to play test the game once before presentations, so I wasn’t able to iterate as much as I would’ve liked from a design stand point. However, what I did learn was quite interesting. In my first draft, I was so focused on the complexity of the rules and how interesting the mechanics could be, that I didn’t think about how those mechanics impacted time. The first play test we did took just over two hours, so it was quickly decided that changes needed to be implemented to reduce the amount of time it took to play. In particular, the issue of how quickly players progressed from the start was important, since it seemed to take a while for the game to ramp up. In addition, adjusting the requirements for what you need to fight bosses was also important to change. However, I did receive positive feed back about the core mechanics, so I believe the main thing to do in the future is simply to continue play testing and iterating on that. Overall the process opened my eyes to how easy it is to become overly absorbed in certain aspects of a project, and helped me appreciate just how much work goes into producing a well balanced and fun board game. Despite not being perfect, I do think the game has a solid core, and I’m proud of what I’ve accomplished with it so far. I don’t know if I’ll be able to, but in the future I would like continue working on this game and refining it, maybe even turn it into a proper product if I become confident enough in it.

Looking back through my write-ups, I’d say the most significant thing I’ve learned is how to fail. In most classes failure is cut and dry, and as soon as you fail that’s it, you have no chance to try again. In this class it’s been actively encouraged to fail, and then try again so that you can learn from your mistakes. In most courses failure simply results in a feeling of dread and anxiety for your grades. Here it spurs you to improve because you actually have the chance to improve, and I think this has greatly improved how much I’ve learned from this course because of it. Most importantly what this means is that I feel I can more confidently fail and move on from said failure in the future, which will be a very important skill not just in work, but in life too.

This class has definitely spurred me to think about myself differently. Because of this class, I’ve relearned how to enjoy making. Prior to this class, most experience I’ve had with making were in my major, in sterile, grade driven experiences. All my previous experiences in making have been dull and life sucking, but over the course of these assignments I’ve learned that I still have the spark and drive for creativity. It’s been quite a liberating experience for me. On some projects I was not able to do as much as I’d wished, or didn’t fully implement what I’d want, but it wasn’t failure on a points or grade based level, it was failure on a personal level because I was invested in the projects themselves for their own sake, not for the sake of some grade that is supposed to somehow tell an employer my capabilities.

I look forward to continuing to work as a maker in the future, whether in my work, or simply as a hobby. To be a maker is simple, after all: use your creativity to produce something. Previously I had thought of it in a more bland way, thinking making was just creating a product, but now I think the spark of creativity and the drive of passion are essential to being a maker as well. And I think I’ve gained these thanks over the course of the semester, in no small part thanks to this class.

I feel more confident in myself as a creative thinker, and more passionately about my work as a maker, and for that reason I’m incredibly glad I’ve taken this course.