For this design, I wanted to make a robot that dragged itself across the floor with an arm. I decided I wanted to give it an alien look, and wanted to give it a look inspired by the face huggers from the aliens movies. I think just using popsicle sticks, glue, and rubber bands will be all I need to construct the robot. Below are the bare-bones of my pompom bot I built in class, and later used in the construction of my first prototype. 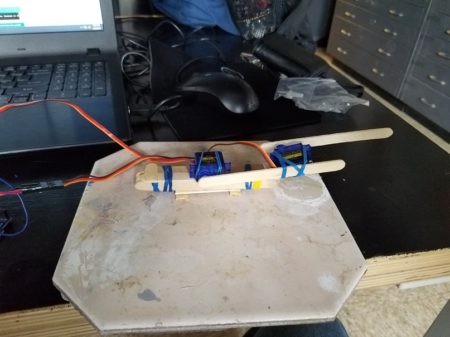 Most of my different prototypes were in the different iterations of movement style, as actually getting the robot to move was much harder than I had anticipated. In my initial design I tried to make the robot move with its arm in one big sweeping motion, having the shoulder joint lower first, then having the elbow joint turn 90 degrees rapidly. This caused the bot to fall over a lot, so changes to the weight of my robot and the speeds/angles of the motors would be necessary.

For my next iteration I decided to give the bot a broader body, and to try having it push with the arm at the rear, rather than pull from the front. I also shaped the popsicle stick on the front part of the arm to be somewhat more pointed, to allow for better grip. This ended up being able to move, but not very well, and went to one side for some reason.

For my final design, I really wanted to get the forward dragging motion correct, so I used a body similar to my second design, and tried to apply that to a design with forward movement. I tuned the angles to move between 45 and 135 degrees, and that seemed to work well. 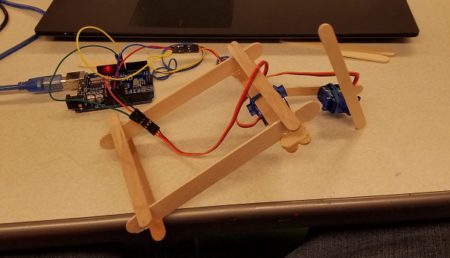 Here are some pics from the building process, I decided to use a green color and a bunch of eyes to give it a cartoony, but alien look. I also had to keep the profile lower to the ground to get it moving. 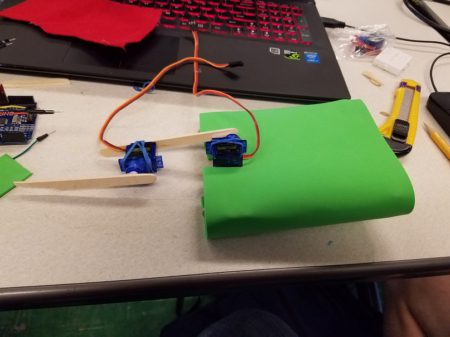 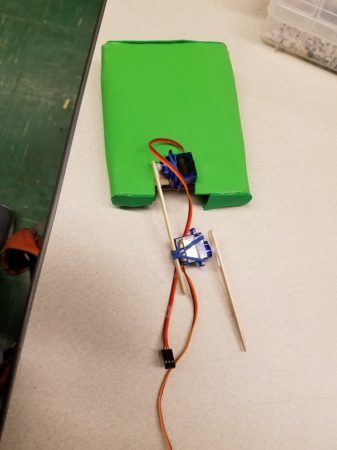 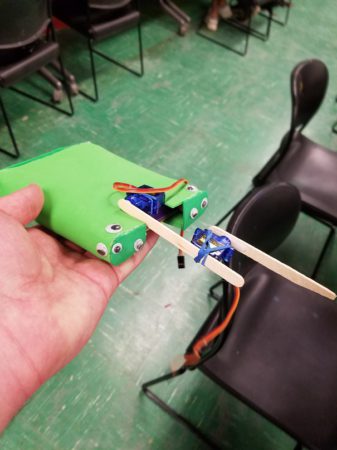 My initial tests for this design didn’t go great:

So I decided to try added some more friction to the arm with a rubber band:

And it works pretty well! The bot itself has a much larger body than my initial design, and the additional friction at the tip and changes to the angles the arm functioned at really seemed to help. I was surprised with how much difficulty I had with a lot of this design. I had figured it would be a piece of cake, but there were a lot more nuances to it than I had anticipated. In the futures I would want to try running multiple arms to further imitate my original inspiration and give it a creepier look, and maybe try for actual walking rather than dragging as a form of locomotion.

Overall I was pretty satisfied with my final design, and had a lot of fun making it to boot. Many of the issues were in minor details of the build, but just as in the first arduino lab, it was a familiar kind of process, so it wasn’t frustrating to debug these issues. Learning to use the servos was a lot of fun, and will actually be useful for me in other classes as I need to work with servo motors in my senior design class.

An additional note, I took a number of videos, but the website wouldn’t allow me to upload them to the page, so I only had the shortest videos I made available.