For my Iteration project I decided to iterate on the game I made with the LCD. I wanted to use a screen that offered more pixels and had an easier interface to work with in Arduino. The main issue with the LCD screen that I originally used was that there were very little pixels and everything was broken into blocks. With this new OLED screen I used, it was 128×64 pixels and it was all located on one area. The coding interface was also much easier since the ADAFRUIT libraries allowed for drawing bitmaps based on x and y coordinates. This made it much easier to code the moving blocks.

A few problems I ran into had to deal with, like last time, making it show the walls would spawn in a way where it was possible to avoid them. I spent a while trying to figure out all of the conditions for the walls, but in the end, I used the same method before which was brute forcing and checking the different options for when a wall spawned. Unfortunately, I wasn’t able to take a picture of this, but this is a image of what it looked like: 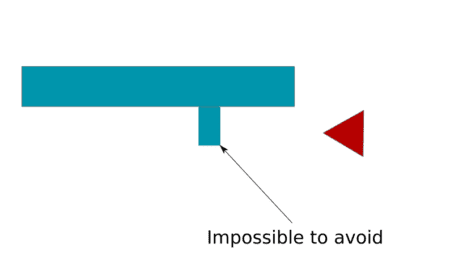 I had also originally had each box move 16 pixels at a time. However, the look of it was very choppy. As a result, I decided to increase the amount of times the screen refreshed since this OLED screen could handle a faster refresh rate. This allowed the look of the game to look much smoother compared to the original LCD.

In order to improve upon this, I decided to make a housing for it as well as use a joystick instead, since that is more intuitive to control. I also added a scoring system based on the total time the player survived, and I made it so every five seconds the walls would speed up a little bit. This made it more challenging to overtime.

I at first wanted to design this like an arcade system, but once I received the screen, I realized it was too small to make it something like that. Instead, I created a box using boxes.py in order to hold the arduino and I made cutouts for the screen and the joystick. Overall, I am happy with how it turned out, but If I were to redo it, I would probably make the case more ergonomic to hold. I would do this by using an arduino nano to make the overall form factor smaller and use smaller wires. I would also solder the wires together too.

This was the original lcd project:

This was the new improved project: