For this iteration project, I wanted to redo my papercut lightbox from Assignment 3: Paper Circuits. The first project can be found here:

The final product wasn’t too bad, but there were definitely some issues and snags I would’ve liked to have done better. Some of these included:

Because I had these distinct points of improvement, I thought this project would be a good choice to iterate on. My improved plan was to create the lightbox with papercut layers as before, but with the right kind of foam, a wooden frame, and a string of lights around the backdrop border.

I brought my proposal up to the instructors, and they gave me the helpful suggestions to use Arduino NeoPixels instead of fairy lights, and Duralar sheets to diffuse the light more than regular paper. Also since the previous type of foam I used was extremely difficult to cut and quickly crumbled, the instructors gave me foam core to use this time around. 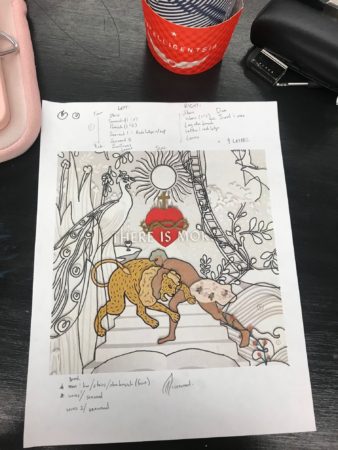 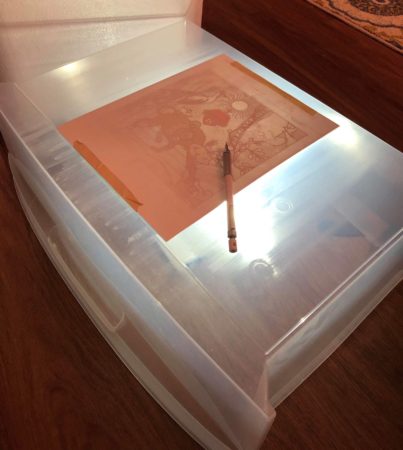 For the paper art, I chose to recreate the artwork of one of my favorite albums. This part took a lot of thinking through the layout of the art and breaking up the components into paper layers. After some time I managed to reduce everything to ten layers, which I then outlined in dark pen to better distinguish what to cut out. I got several sheets of plain white cardstock and added a .5 inch border around the image. To trace the art onto each sheet of cardstock, I came up with a makeshift tracing lightbox using my phone flashlight and my empty sock drawer lol. 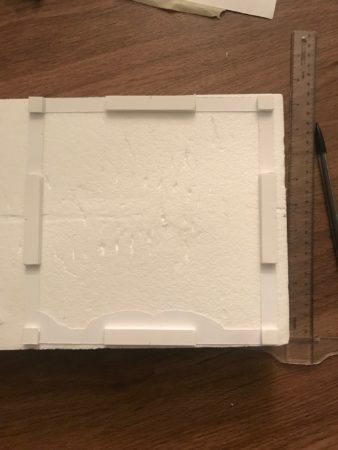 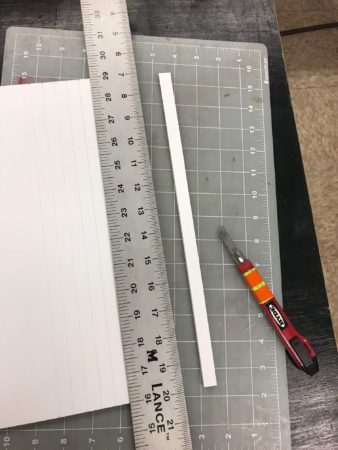 The foam core ended up working perfectly; it was MUCH easier to cut, and the cuts were very clean. The thin bars were firm and easy to work with. I reinforced each layer with .5 x .5 inch squares on the corners and 3 inch bars along the sides, as seen on the right. 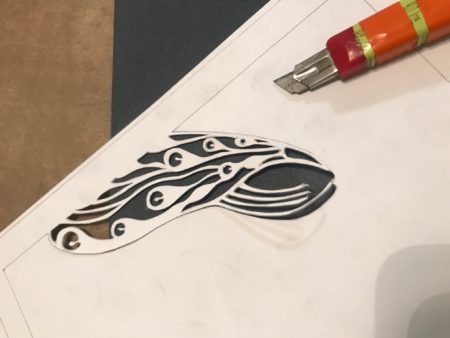 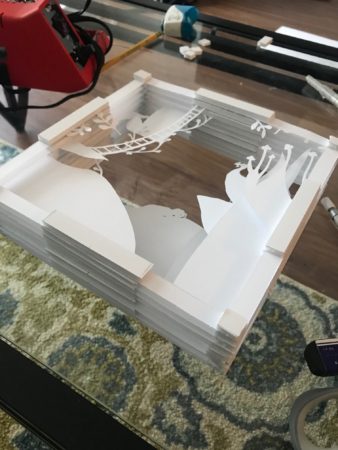 I cut each of the paper layers by hand using a thin box cutter; this part definitely took the longest time (an all-nighter!) and the most labor intensive. However after everything was cut out and finished, it worked out pretty well! The right image is the final product after assembling and gluing all the layers together.

Next were the NeoPixels. I had never sautered before, so I got some help from my ECE roommate to show me how to use a sautering iron and solder. We successfully sautered the three wires to the end of the NeoPixel strip. However, when I wrote and uploaded the code to make the strip shine white to the Arduino, nothing happened. After talking to an instructor I found that it was because I had sautered the wires to the wrong end of the strip; apparently they were supposed to be joined at the DI end following the arrows, where I sautered them to the DO end. (Another great learning experience from this project.) After removing the old sauter and trying again, I finally got the NeoPixels to properly light up. 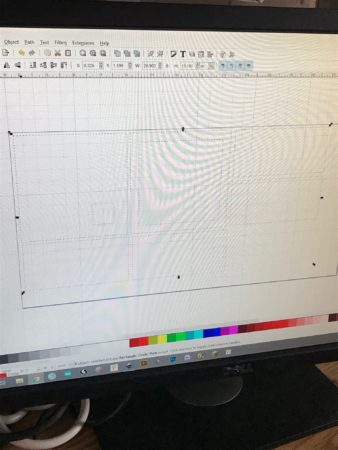 Lastly, the wooden frame. Another instructor suggested the Box Maker site to me, where you simply input your desired dimensions and the site exports an SVG of the design for a press-fit box. I opened the SVG in good old Inkscape and, as I learned during the first week of class, I edited the layout to fit on a 15 x 30 inch wooden board and for the laser to cut straight through the wood. Uploading the file to the printer, cutting the pieces out, and assembling them was a quick process, and easily enough I had my frame.

I finally had all of my parts, and it was pretty quick to setup everything up. I cut out a huge square for the front frame, and a small hole in the back panel to feed the Arduino wires through. I’m not really sure why the lights ended up being orange instead of white even though the code had values for white, but that wasn’t too much of an issue.

I didn’t have a hammer to completely press the sides together, and plus it was 1 in the morning so I didn’t want to make too much noise doing so. So the box sides are a little loose in the pictures, but otherwise here’s my final product! 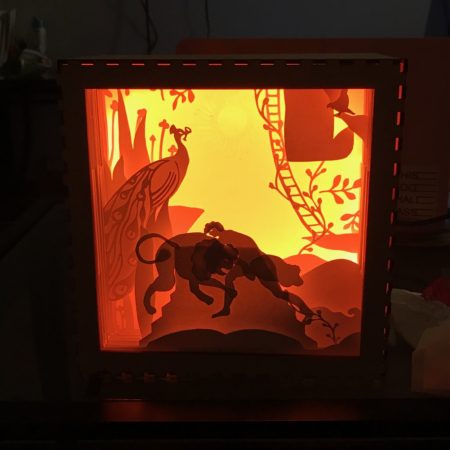 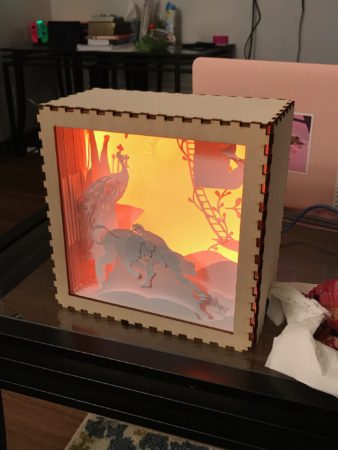 Overall I’m pretty happy with how this turned out, considering how much work I put into it. Only nitpicky things I would fix are how gluing paper layers directly on top of each other, e.g. the lion and the man, makes certain pieces look darker which I wasn’t expecting. The sun in the top middle also is rather faint and not as pronounced as I would like it to be, so perhaps there’s a solution for that. Outside the scope of this project I would like to paint the frame white and keep it.

Even though this project took a lot of work and time, because it was over something I really wanted to do, none of what I put in felt like a lot at all. I had a lot of fun doing this and see how much the iteration project improved from the original, and I also got to learn the new skill of sautering.