For my iteration project, I decided to redo the first assignment, using the laser cutter to make a name tag. My original name tag was nice and simple, though a little small. For my iteration, I wanted to make my name out of acrylic as it makes the name tag look cooler than the plywood. I noticed that when rastoring on acrylic, the print is white and I wanted something with more of a color. My original idea was to use the Silhouette cutter to make a sticker that I would then place on top of the acrylic. While also looking for inspiration on Google, I came across someone using an LED light and coin battery to light up the acrylic. The effects of the light were really cool, and it seems simple enough for me to do. While proposing my idea to Maxx, she concluded that my idea was too simple. She suggested I instead use NeoPixel strips as the base and have the light shine up that would give the rastored acrylic some color instead of placing a sticker. After showing me a few examples that were in the FabLab, I decided that this was a much better idea than what I originally thought of doing.

Since I already had a general idea of what I wanted to put on my name tag, the designing part of the name tag was relatively easy to do. Since I wanted this name tag to be more personalized than just having my name on it, I decided to add my Bitmoji with a coffee cup since coffee plays such an essential part in my life!

I decided to print out a prototype version of the name tag on plywood, just so I can see if I liked how the designed turned out and how big it was. Right when I was about to print, Maxx noticed that the name tag was a tad too big. After adjusting the size, I was ready to print it out! The final prototype turned out pretty nice and I really liked the size and design of it.

I went back and made a few tweaks on the design since there was a bit of blank space on the prototype. After adjusting, I decided to laser cut my design onto acrylic. Halfway through the print, I realize that I forgot to adjust the size of the design!! So in the end, the design was slightly larger than I anticipated, but it was still really nice. 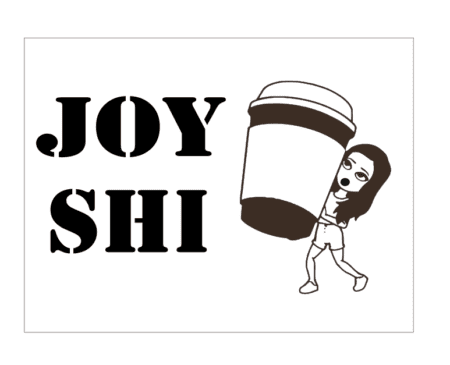 With the acrylic design ready, and NeoPixel strips working, it was time to determine how to make the stand I was going to put my acrylic on. Google had many ideas, from using a box to 3D printing to using the laser cutter. Since I was already using the laser cutter, it only seems reasonable to continue using the laser cutter. The design of the stand was relatively easy to format. Drawing out the stand on Inkscape was relatively easy since they were all rectangles cut into different shapes. I specifically was very careful when it came to the measurements of the slit for where I was going to place the acrylic. The lasering of the stand was also straight forward. However, when I attempted to put the acrylic into the slit I made, the acrylic wouldn’t fit!! I was slightly disappointed since I specifically paid attention to make sure that this wouldn’t happen:( Thankfully it was only slightly off, so I used some sandpaper to remove the excess part. Surprisingly this took a while since the pieces were small, and I didn’t want to break it. After finally being able to have all the pieces fit through the slit, I worked on placing the NeoPixel strips. With the help of some double-sided tape, I placed the NeoPixel strips on the base of the stand. I then glued the top part of the stand with the acrylic on top of the NeoPixel strips.

In the end, I really liked how the whole project turned out, even though now it’s more like a nameplate than a name tag!!!

Inspiration used for base: