For this assignment I decided to take a whack at combining what I learned from the name tag assignment and the Arduino assignments and create a little ‘light show machine’. The plan for this creation is to combine more complex woodcut patterns with motors, LEDs, and an Arduino to make an object that spins the designs over top of lights to make cool patterns. 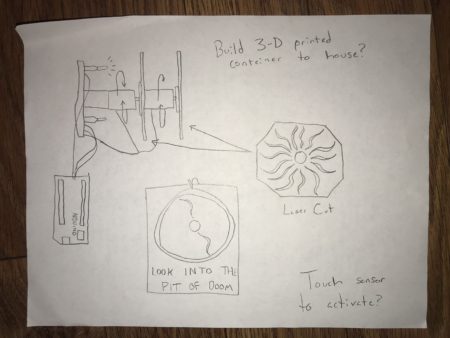 I started out this assignment in class by drawing out some ideas and creating a general sense of what I was going to do. Once I started thinking more on making my light show machine, I realized that 3D printing parts would be a great way to house everything very securely and making sure that everything kept from falling apart. Given the time constraints I had, I realized I could make small 3D prints to help create the most essential parts of my machine. 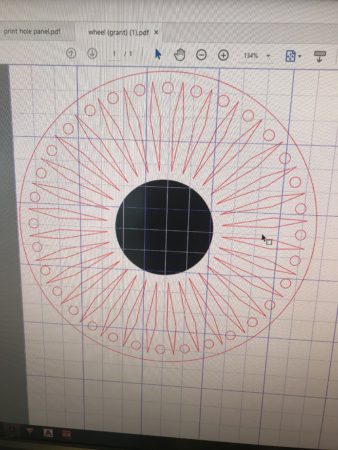 After planning out my design, I went on to laser cutting. I had designed a file in Illustrator and made the design go radially, resulting in a sort of flower-like pattern for the wheels that would be spinning on my machine. Creating this pattern was easy enough, and I realized that I could go back later and create multiple different types of patterns in the future for different kinds of visual effect. 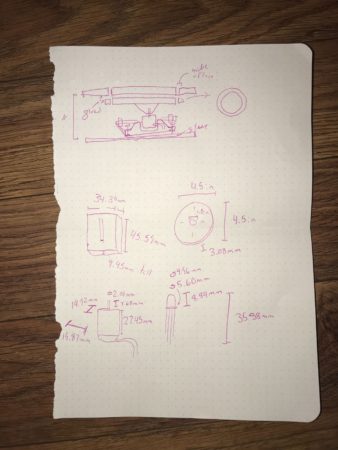 After laser cutting my wheels, I went on to setting up circuits with my Arduino and component parts (breadboard, resistors, etc.). I sat the breadboard on top of the Arduino to try and save lateral space and make the final device more column-like as opposed to plate-like. I had to work with some components during this part that I hadn’t worked with before — RGB LEDs and a 6V continuous servo motor. Wiring these in was a fairly simple task, however I quickly realized that I wouldn’t be able to run the motor and both of my RGB LEDs off the same power source feeding the board (at least without a motor controlling chip, which I should’ve asked about at the fab lab; my Arduino kit didn’t contain one). To help alleviate this problem I set up a separate controlling chip to power 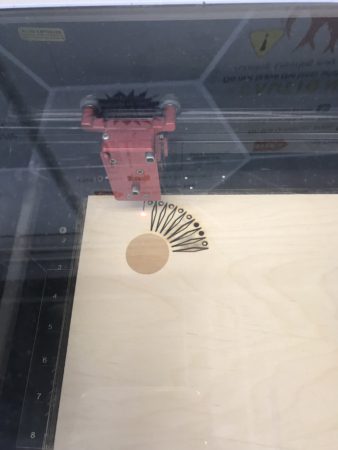 the wheel off of a 9V battery. The Arduino controlling the LEDs would then be powered by a computer or power brick (what I used to help make this thing a bit more portable — an initial goal of mine.

Once I got that all set up I went about mapping out 3D designs for my adapter to help hold the wheel to the servo and a bracket to  try and contain the breadboard and Arduino on the bottom, while housing the motor. I got help from Brandon and worked in Fusion to map 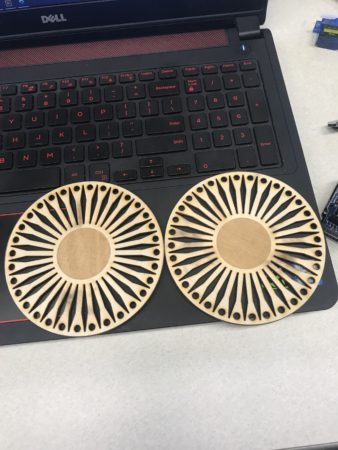 everything out to the mm. This part way definitely new for me, but got pretty understandable pretty quickly, so I’m glad I now can work software like that better.

After printing out my component parts I headed home to assemble everything and add a piece of wax paper to the wheel that was closest to the LED (to help disperse the LED light and make it more ‘glowy’ as opposed to super direct beams). I housed my final machine in a roll of duct tape and some cardboard for the time being, as I didn’t have time to accurately measure everything and create a 3D printed housing (although at this point, I definitely want to do that). 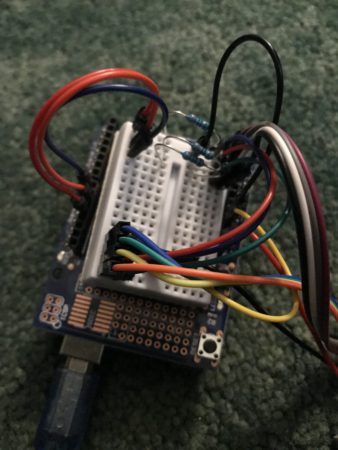 Getting everything to sit in a way that kept the servo from getting jammed was definitely a challenge, as was finding ways to house everything that are neat and still accessible. Another problem that I realized far too far into this project was that continuous servo motors can’t be controlled speed-wise in the same way that stepper servos can, at least without additional parts. I wasn’t able to take care of this before turn-in so my light show machine looks a bit more like a glowing jet engine, but I still think it’s cool.

I would say that as much as I would have wanted this project to end up looking really finalized, there’s still some stuff I could add to it to make it better. I plan on 3D printing a housing for everything once I find a way that I can make it all sit uniformly. I also want to be able to make it so both wheels on the machine can spin in different directions, but this may take some more time and effort to crack. I lastly would like to be able to incorporate some type of sensor into this project, but again, I think I may need to take care of some other parts before that happens. 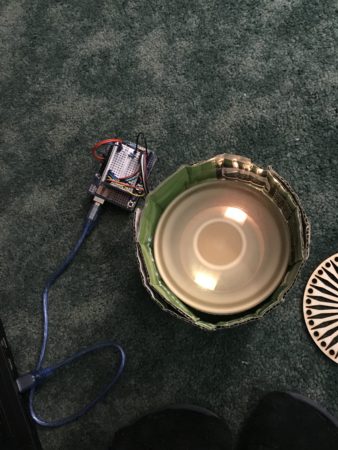 I was really happy with what I made for this project, even if it is somewhat rough, because it really helped me use the skills I already had, expand them, as well as learn new skills I wasn’t planning 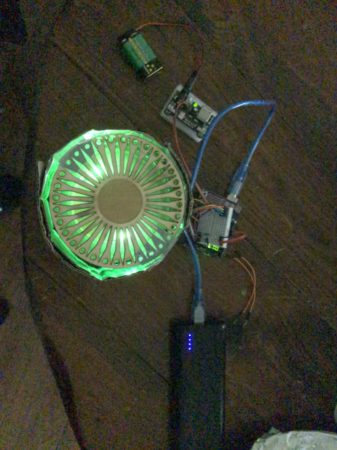 on learning. The coding on this project was fairly simple, as it usually seems with smaller arduino projects. Housing and measuring things was definitely something very challenging, as well as learning to approach the different design challenges that would pop up in the process of working on my gadget.

I’m excited to keep prototyping my light box and see if I can make one that really looks professional within the next couple of weeks. Maybe if I get it really right I can use it in conjunction with the speaker I plan on making for my final project!

Here are some videos of my light box in action: