For my iteration assignment I decided to revisit the arduino Input/Output project. Previously I had used a current sensor to measure the current through an LED to determine the right resistor needed for a particular brightness.

I had used these sensors in the past, so I wanted to try a project with a sensor I had never used before. One area I had been interested in was biometrics and I had seen some of the cheaper options for pulse or muscle sensors that were on the market and figured I could explore those. The sensor I chose was the MyoWare muscle sensor, my plan was to use it to create a sort of feedback mechanism to help combat stress by detecting if one was clenching their hands which can be a sign of stress. The feedback would be provided by a group of vibrating motors where a slight innervation of the muscle fibers would cause a “low” reading and activate a single motor, a medium innervation would activate two, and a strong innervation would activate all three.

The setup was fairly straight forward, the sensor only has 3 pins to connect, Vcc, Gnd, and Signal. The sensor operates off of an analog signal so it can be tested with the example code included with the Arduino IDE.

After I prototyped it on a breadboard, I decided to try and solder a protoboard together for it and also use an Arduino Micro in the hopes that I would get to actually make it a wearable device. 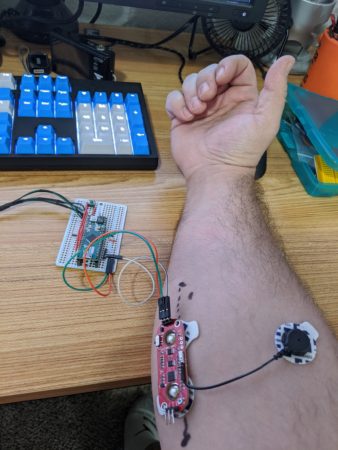 The first thing I noticed was that between applications of the sensors, the numbers had a tendency to change, so the sensor had to be calibrated before each use. Then after a few uses, the sensor’s ability to detect kept worsening. I bought a pack of 50 electrode pads and used nearly all of them placing and replacing the electrodes to try and get a reading. Eventually, the sensor stopped working and I had to halt all progress on the project.

Before that happened, I was able to at least get a video of the setup working as intended.

My reflection on this project was actually fairly frustrating. The sensitivity and erratic nature of the sensor meant I had a hard time getting very reproducible results. furthermore, the sensors seem to be very picky about where on the muscle bundles you place the sensor. I am hoping this is just due to the sensor being defective, however if I were to use biometrics again, I may need to use one of the more stable sensors such as the armband.

Failure aside, it was definitely good to have worked with a different kind of sensor that actually uses the sensing of muscle action potentials to control electronics. wearing the sensor around the lab or my workshop did kind of make me feel a slight bit bionic.