Normally my experience with Arduino robots is using 360o Servo Motors, so I was more used to wheels and liked the functionality of pivot turns that come with having 2, 360o Servo Motors. However using 180o Servo Motors, wheels are not possible (robot would just go forward then back and have no net gain. I opted instead for a walker design similar to 4-Legged Animals.

For the first iteration, I wanted to make the robot entirely out of laser-cut 1/8″ Plywood. This was to ensure precise measurements for the construction and sleek design. For the legs I drew inspiration from the way press-fit boxes have slots that are able to fit the 1/8″ ply. I did rush the design of the base and it was a simple rectangle. If I were to redo the base I would make the shape much for sleep and resembling the torso of cookie monster.

Below is the Inkscape for the robot frame. 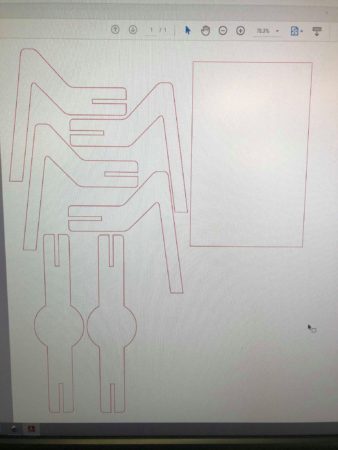 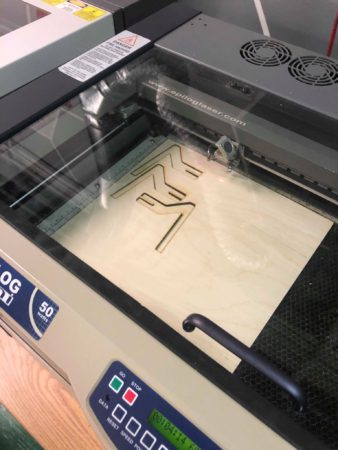 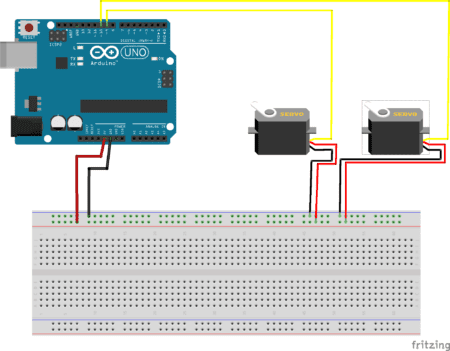 My first iteration of the robot was not successful in moving forward on it’s own. With numerous code iterations the result below still would just jerk forward and backward and have no positive net movement.

For my second iteration, I wanted to preserve the use of the frame, but instead noticed that as a result of gluing one of the motors slightly higher there was an inconsistency between the two separate legs. So I rewrote the code so that the robot would move in what was the side direction (and I just treated this as the new forward). I also reglued the motor so it was slightly in a better position.  The result of these changes was a much better motion of the robot. I also increased the delay in the code and added a bit of hot glue to the bottom of the legs to have more grip on the surface. Below is the result of these changes:

The next portion of the iteration was modifying the robot to be more visually appealing. In the previous class, I enclosed a motor in fabric to resemble Cookie  Monster, and have the upper portion bite up and down on a felt fabric cookie. Unfortunately, the Arduino is unable to power three servo motors with the 5V onboard power supply, so for now it is just attached to the top. I wrapped the legs in blue pipecleaners, and the base in fabric and pipecleaners to resemble Cookie Monster. I added small fuzz-ball feet as well. Below is video of the final robot with the visual and functionality changes:

Overall I’m really pleased with the final result of this assignment. While the robot itself is horrific, it does resemble Cookie Monster and is able to move fairly well. For future iterations, I definitely want to include a power source to have the head movement as well. I also want to modify the code to support turns.