I had an idea to utilize negative space for the multi-layered vinyl sticker, so I went hunting for potential designs. I ended up getting inspired by a cute design with melting cat shaped ice cream and started designing. I wanted to print them all in one go, even though I needed four colors, so I broke up the image into three blocks of color and arranged them so they can be printed at the same time. I made a couple copies on the same piece of vinyl in case I messed up on the first one, I had a back up and saved vinyl and time. It ended up very handy since I used two back-ups on my final. 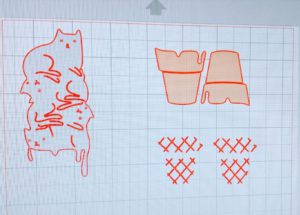 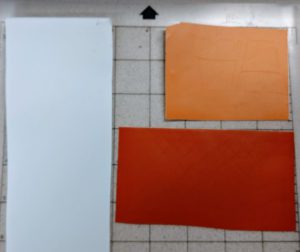 I scavenged through the scraps of vinyl, and found my background, but since it was smaller than I would like (7×4″), the elements would be quite small to fit everything. I didn’t realize how small the details were going to be, and taking them out with tweezers was very time consuming. Also, I was using various types of vinyl, through I didn’t realize the subtle differences (matte, glossy), but it made a big difference since I didn’t change the cut settings on the machine. The machine was set to cut matte, but glossy required a larger setting, so they didn’t cut through the shiny vinyl completely. I ended up having to fix the incomplete cuts with an exact-o knife to salvage it. 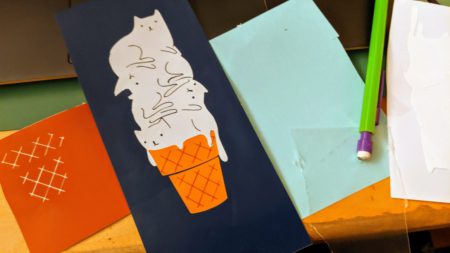 If I could redo this project, I would have made the strokes of the design thicker or the overall size bigger. I would also make sure the strength of the cutter matches the material, so I know that it will completely cut and removing the leftovers would be hassle-free. Also, I would have treated the cone a little different, where I would cut out the intricate details of the lighter color and layer on the top one. Instead, I ended up picking out thin strokes of the cone texture with tweezers and ended up breaking one of the lines on the first try. Another nitpick is that the leftovers from the eye cut out ended up sticking to the back of the adhesive, and it is somewhat visible on the end result since it makes an indent on the flat surface. Next time I will try to remove any things on the back that might make an indent. Overall, I think I had a decent result for the limited time I had to work on it, and I’m happy with my design! 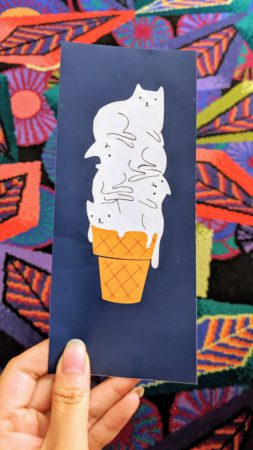