For my name tag, I wanted to pick something that not only would represent me, but that I could actually use in my day-to-day life. When I’m not in classes, I am a full-time Linux Systems Administrator for the University’s College of Engineering. As such, I was thought I’d make the name tag have something to do with Linux and computers in general. So I had to start by having the Linux mascot on there, so Tux was used to represent my Linux involvement. I then also used my name converted into ASCII binary and placed it underneath my name in regular ASCII. I also wanted to show that not only was I a Linux enthusiast, but I am also an administrator, so a little command line excerpt from Linux to show that I am root also seemed appropriate. That was for the front. for the back, I figured I could try and get fancy. I added the Commodore logo which was the brand of the first computer I ever used. I also included a QR code that would correspond to a vcard with my contact information. This still seemed to simplistic for me, and I had work-provided name tags that were no real different. So I thought, what if I had it hold my business cards that was I can take it to conferences and have them at the ready! and my idea was born! Finally, I decided to use the same font that is used on most computer terminals, and I downloaded the custom font pack and chose one I liked.

To accomplish the ability to hold business cards, I decided to try a three piece construction, a front and back, with a spacer to give room for ~10 cards. The back had a cutout to allow the top edge of the cards to be seen, as well as a finger cutout to make it easier to pull out a card. Earlier ideas had the slot for the cards on the side, but without complicating the design further, it was going to be too easy for the cards to fall out, as such I opted to use gravity to my advantage. 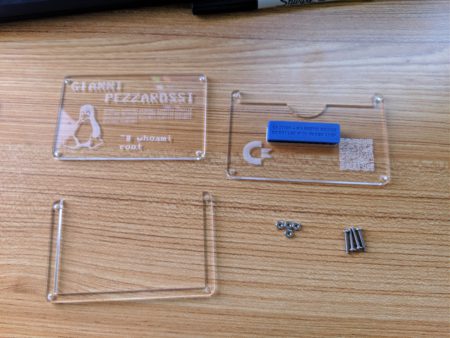 Final set of pieces cut out of 1/8″ clear acrylic on the Universal Laser. Since gluing acrylic can be tricky and I decided to use a mechanical means of fastening the three pieces. This then would also make it such that I could print multiple backs and fronts and swap them out depending on the occasion. Since the software would be far more precise than I could be with a drill, I opted to have the laser vector out the holes for the screws.

In doing this, I did discover that sometimes (either by my hand or a bug with inkscape) my drawing has been nudged by ~1/64″ and since I was working at a precision of 1/32″ I needed to correct this. So a lot of fine detail work and use of inkscape’s snapping tools helped me make sure the three pieces were as identical as I could make them. 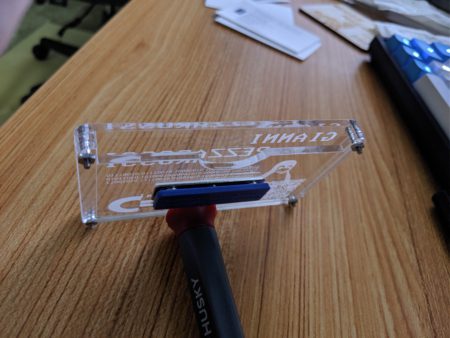 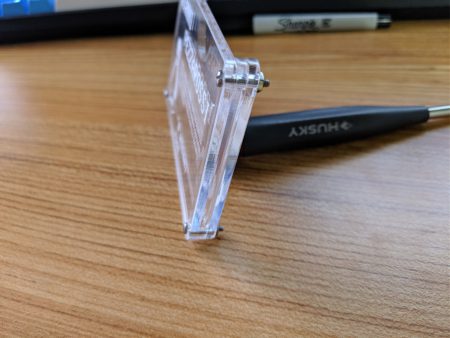 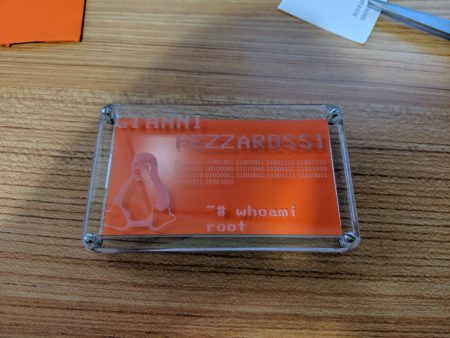 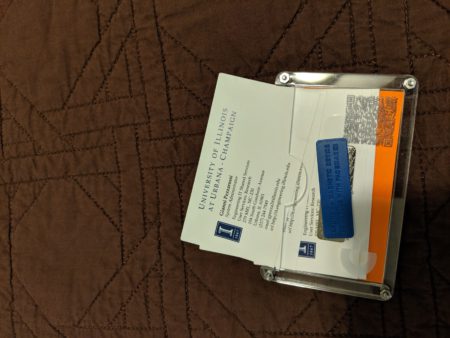 Overall, I am quite happy with how it turned out. things I would need to address if I could do it again would be to find a way to give the rasters more contrast since they can be a bit hard to see. Also, my QR code ended up not working, I think due to the contrast issue described. Otherwise, my meticulousness with the measurements was fruitful, everything fit together great, the slot for the cards fits like a glove, yet allows them to be pulled out easily. Furthermore, it was functional as I was able to wear it! 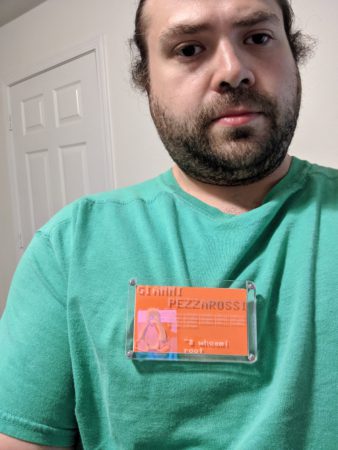 I did add a piece of orange paper (go Illini) to the front to help with contrast. I tried to use paint pens and sharpie to color in the rasters, but I could not get it to look right, so I wiped it all off. Furthermore, printing it in a mirrored manner so that the rasters are actually on the bottom/inside instead of the outside would eliminate the shadowing effect which might make it easier to read.