First, I bought a cheap solar panel, a battery, and a solar controller to connect the two and provide an output. After a bit of googling to make sure they were compatible, I was able to get a straightforward solar battery, capable of (slowly) charging my phone: 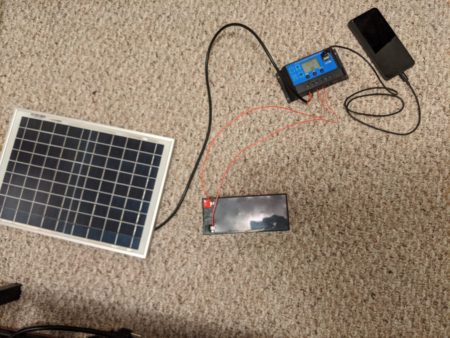 And then on the software side, I got a simple website up on a raspberry pi. However, I wanted a way to prove that the website and the raspberry pi are connected, so I added a button to the website that would turn on/off an LED on the pi. (Forgive my home’s awful wifi password)

And this is the final result after hooking up the raspberry pi to the solar controller, and toggling the LED light from the website!

This project was inspired by a website my friend showed me over the summer, and you can find it here: solar.lowtechmagazine.com/about.html

When I first saw this website, the immediate thing that went went through my mind is the thought “wow, I wish I knew enough about the technologies involved to be able to do that. But with so much electrical and website-hosting knowledge involved, I’m sure I’ll be able to in a few years.” Really, I gave up before I even begun. I did no research, instead I just trusted that I wouldn’t be able to do it and instead assumed that I’ll eventually be able to do, without any sort of timeline. After taking this class though, I learned that I do that very often. I wanted to take this opportunity to look back at something that I’ve dismissed before and really work through it without any preconceptions about its difficulty or possibility. I think that after this class and the assignments, I’ll be a lot more eager to take on new skills and challenges without being intimidated by them.

This course has definitely been my favorite class this semester, and one of my favorite in all of my courses so far. It’s also made me realize that “making” is something that I had always enjoyed, but never had a word for. In my highschool was a room called the “Engineering Room” and it was just a place with free supplies and tools open for anyone to come in and use. It was my favorite room to spend nearly all of my after-school time in, and it was what made me pursue a major in Mechanical Engineering. However, when I came to the school and started taking courses, I found it to be so much different from what I did in the “Engineering Room”. I was suddenly aware of the difference between tinkering and engineering, and realized I liked one much more than the other. It was because of this that I switched majors into Computer Science, because it allowed me to tinker so much more than Mechanical Engineering had.

And now after taking this course, I learned that there is a word and a community behind the thing I loved to do: makers. I had always called it tinkering, prototyping, or “lego-bricking”, but I’m so glad to have discovered that the true word is Making, and that there are millions of like-minded people dedicated to create a welcoming and accessible community of teachers and learners alike.