For the maker space final project, I knew sort of what I wanted to do. Earlier in the semester I had made a theremin like device, that used ultrasonic sensors to produce different pitches. I wanted to rework that idea into something that was a bit more useable by incorporating that functionality into a midi controller. I hadn’t really worked with MIDI on the hardware level, so there was a little bit to get acquainted with as far as soldering and designing a circuit and making sure the serial data was written properly. 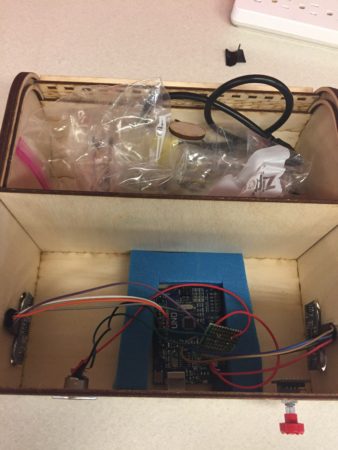 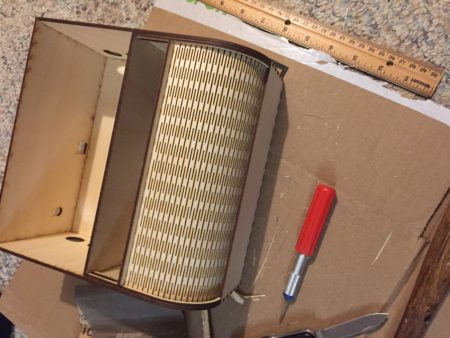 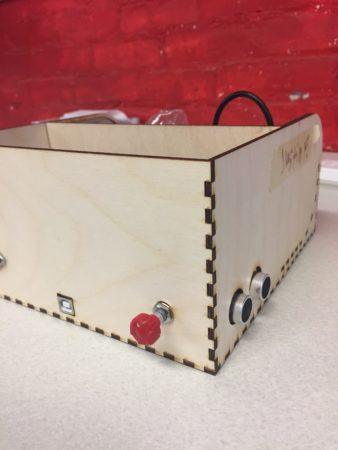 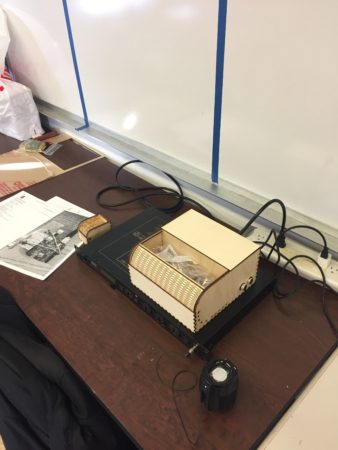 The most challenging part about this project was the housing. I decided that I would learn to use pressfit boxes for my required learned skill. I hadn’t used them before so I didn’t realize what I was getting myself into here, and it turned out to be a surprisingly complex and time consuming thing. I really had to spend a lot of time re-thinking how I wanted to design this box, and take a lot of caution in my measuring and such. A simple box can be just that: simple. This box was customized and includes a shutter flex lid, middle wall and top lid, so there was a lot of modifications I did, as well as vectorizing the shapes for the sensors and usb jack to stick out of. I guess what I’m most proud of with this box is that it does have a nice ‘finished’ quality to it. I believe that most people probably wouldn’t know what it was, but would recognize that there are some strong and nicely crafted design choices, and it has an appealing aesthetic, even if it is kind of bizarre.

One of my original learning goals with this project was to create something that had ‘good craftsmanship’. This was hard to define, but to me that meant that I was going to force myself not to take any shortcuts or anything, but really sit down and try to make a piece of hardware as presentable as possible and also as functional and sturdy as possible. I pushed myself to achieve this in my project in different ways. With the box, I went through a prototype phase to understand how the shutterbox design worked. I then considered multiple ways of modifying the design in different ways to get the effects I wanted. I also spent a lot more time than I ever expected on making sure that everything was going to match and line up. As I said above, the box was an accomplishment in itself, and I feel like I made something satisfactory.

Another aspect was implementing a real MIDI jack. This to me makes the piece more of an actual functional piece of equipment. It’s not just an arduino project that can spit out MIDI over USB, but the fact that it is MIDI capable for physical electronic instruments adds an air of professionality to it. Something else with the circuit design That I did was abandon bread boards. Although the circuit was originally designed on a bread board, I transferred it to perf board. All of the connections are soldered as well. I had done some soldering before, but this really put my skills to the test. I’m happy with the end result, because again I feel like pushing this project past a breadboard phase and choosing to hardwire it gives it a more professional feel, or beyond just a DIY project.

My secondary learning goal with this project was to learn more about press fit boxes. I did learn a lot about them, and I think i’ve talked about them enough already, so I’ll spare whoever is reading this.

My final main learning goal with the project was to become better at implementing my ideas, and turning them into real world pieces. This is a bit hard to explain what this means, but to me this means something along the lines of: How can I get his “idea” nailed down, and turn it into a “thing”, and not just a thing that carries out the idea but a real finished product. For me, I have a lot of ideas, but many of them never actually go through the metamorphosis of becoming reality. Along the way, many things change, and sometimes you realize you have to compromise or something, and the ‘thing’ you make is sort of far away from the original idea. As someone who has been making art of different varieties for a number of years, i’ve become accustomed to ‘going with the flow’ and accepting these compromises, or using them as points of inspiration in themselves. With this project I wanted to take a more deterministic approach, to me meaning that I would pre-plan everything, and try to design each step , with no compromises or shortcuts, and maintain a consistent methodical and ‘contractor-like’ attitude rather than an ‘artist-type’ attitude.

Although this is the hardest learning goal to explain, I feel like it was important to me because as I progressed through the course, This idea of craftsmanship kept popping up. For example, a really great project for me was the textiles project. I spent a lot of time creating a plushie, and I’m extremely proud of what I made, but there were some parts that were rushed through. I know from experience that some things can be rushed through, because having a finished product is a lot more important in some cases, so I tend to just get things out fast, and focus on making it real, not perfect. The course in general has taught me that making stuff is fun, obviously, but what really pays off is iterating through different designs, or redoing parts that were not created very well, and honing into something that you can really be proud of.

I believe this course has really given me more confidence with making things in general. Before this course, I had known how some of these things worked, and had assumed they were within my grasp. Things like arduino I felt like I could learn when I got a round to it, But with this class, it just kind of throws you into the pool and you have to learn to start swimming. So now that I’ve dealt with these things, I feel like I really can tackle bigger projects, that I know I wouldn’t be thinking about If I hadn’t had my experience. I suppose I do consider myself a maker, and I think I’ve sort of always been one. I’ve loved creating and making things my entire life, but I didn’t realize what makerspace or being a maker meant before having took the class. To me, being a maker is about really striving to do your best to create the things you want to make, the best that you can make them and committing your ideas to reality. Many people might think of something and say, “yeah, but I could never do that”, and shrug it off. I feel like a maker is someone that would say, “Hey, I can do something like that, using this tool I learned about before” or “Maybe so and so knows something about this, and they can help me make something”. I think that’s the most important thing about the makerspace community is the idea that anybody can come in and make their thoughts a reality. Not only this, but it can also be fun and easier than you might’ve thought.