For the final project, I created a press-fit constellations box powered by wireless inductive coils. 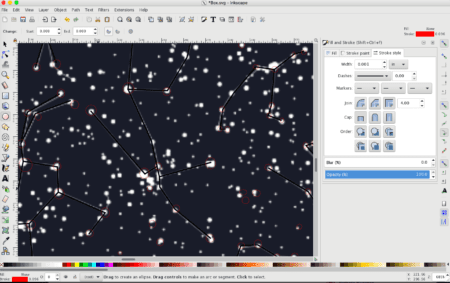 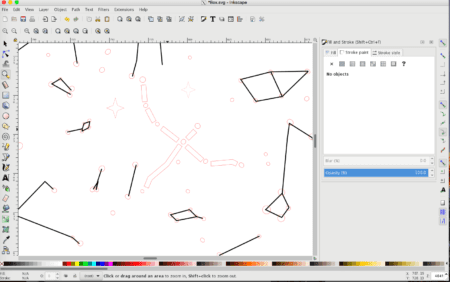 This process took an insane amount of time because I wanted to really get the design right. I felt pretty comfortable on Inkscape, but there was still a lot of features in the program that were unknown to me so I was learning as I was designing. There was a lot of back in forth in designing. 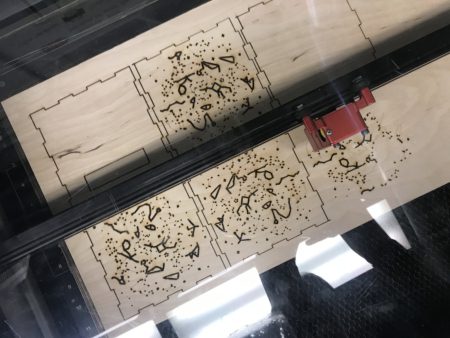 Overall, I was really happy with how the box and design turned out. 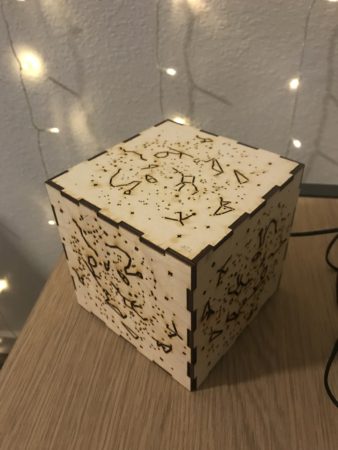 My learning goals were to (1) challenge myself by learning and integrating wireless inductive coils into my design and the all the components needed to create the circuit because I was never really knowledgeable or comfortable with circuits before, and (2) to extensively plan out each of my steps before I started the project because I’ve found that I usually just throw myself into the assignments without thinking through all the factors and outcome.

For the first goal, I hoped to create a successful circuit that could power my constellation box. I was pretty much clueless on wireless inductive coils so I did a bit of research to find sources so that I could get a better grasp of all the components and functions. I read a few Instructables, blogs, and watched a few videos. I essentially followed the circuit diagram off of https://learn.adafruit.com/wireless-inductive-power-night-light?view=all and the circuit was successful. Before, I was a bit intimidated by circuits, but now I feel a lot more comfortable working with them.

As for the second goal, I really tried to hold myself to the goal. I created a step-by-step list for myself so that I could try to plan out all the components I would need beforehand. I found it helpful in the beginning but realized as I really started getting to work on the project, a lot of factors were shifting and at a certain point my step-by-step list kind of fell apart. But I still believe writing out the steps of a project is really helpful. It got me to really think about the logistics and design of the box in respect to the circuit as a cohesive piece, rather than the two as separate projects that needed to somehow come together in the end.

I’ve learned a lot in this project and the course. Often times, I got really frustrated when something would go wrong in an assignment. I would end up spending more time than I anticipated in order to fix the issue or coming up with an alternative. I treated arising issues as a barrier rather than an inevitable part of the process. I’ve always considered myself a good problem-solver, but I was never very comfortable when I ran into one. I think now, I have a much better approach to problems. I’m less emotional about them and more productive. I tackle the issues head-on.

As an advertising major, I always saw myself as a strategist. To be fair, I’m not sure where I’ll end up but I’ve always been drawn to the duality of the profession. Analytic and Creative. This course allowed for me to experience with different mediums (almost all that were new to me) and I think it sparked the creative side of myself. I would consider myself a maker. To me, a maker is anyone who devotes their time and their craft to create something. Making is collaborative, challenging, rewarding and unlimited.