Subtitle: this is all just for me, really. Also I’m writing this on a plane on limited sleep so I apologize if it’s a little unclear at points.

Question 1: (Sorry I know this wasn’t supposed to be a full write up but I ended up explaining a lot of it anyway).

My final project was, in a few words: Rings Made Out Of Multiple Materials That I Can Make Myself With Some Level of Customization.

These are the final products that are the rings! 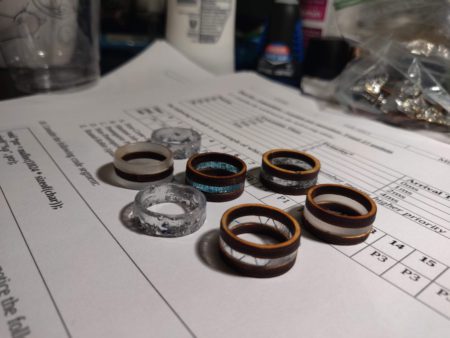 And, because the entire project ended up a little more resin-centric than expected, the rings + some other fun side things I made with leftover resin (I’m not the best at approximating volumes.) 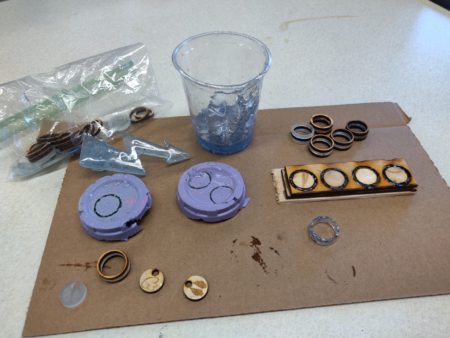 The process to get to the end was pretty winding. I didn’t start out with the clearest idea of what I wanted to do, beyond the most basic idea. I picked up and abandoned multiple methods of making rings once I learned what they did- and what they were and weren’t well suited for. (Such as the CNC mill). I wound up settling on resin, partly because I’d gotten stumped on the other methods and also because I really liked the idea of suspending whatever I wanted in rings.

Now, in order to make something in resin, you need to have a negative- aka, a mold you can pour into, that will harden into the shape that you want. With resin, either the mold has to be able to flex, or you have to be willing to completely destroy the mold every time you use it. I ended up settling on a rubber pour-over mold, which was pretty fun even if the mixture was getting kind of old and congealed. 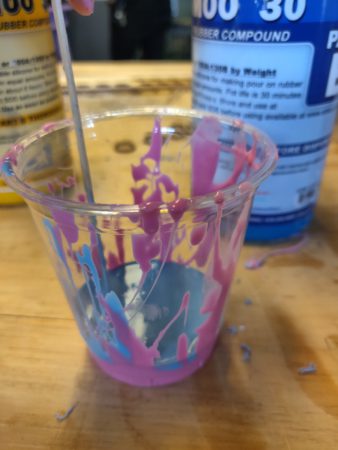 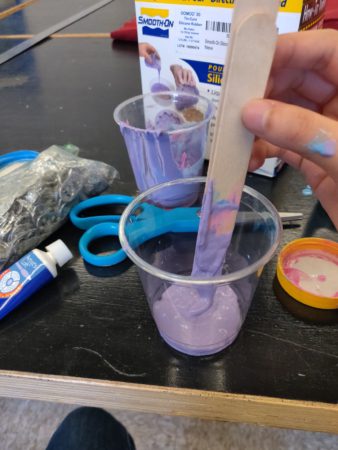 (I also made an effort with a wood mold towards the end, but I should’ve used way softer wood for the centres, because I wound up not being able to pop the centers out.) 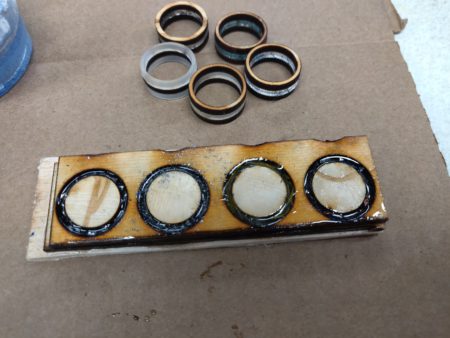 To get the rubber mold negative, I needed a positive. So I laser cut some wood rings to serve as the positive, and in the process, realized they looked pretty nice on their own. That’s actually where the majority of the rings came from, given that the short timeframe I’d given myself and the 24 hr curing time needed for resin didn’t play super nicely with each other. I’m actually really proud of the wood rings, because they were simple in execution and came down a lot to what I thought looked nice or didn’t look nice, which isn’t something I get to do a lot these days.

The resin rings were fun to make too! I’m really proud of how I ended up managing to incorporate metal; by taking little bits and shavings and using those as the suspended pieces in the ring. It looks pretty cool, and I also like how resourceful it makes me feel. There was more than one resin ring made, but they come out cloudy when you first pop them out of the mold, and I only successfully polished one, which is the one in the majority of the photos. 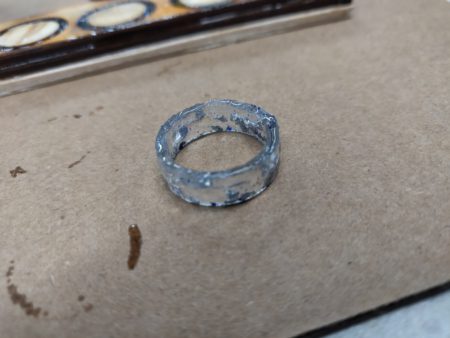 Not everything was smooth going. The rubber mold mixture was a little difficult to work with given the not-really-liquid state of it, so the molds didn’t come out entirely smooth. I think given a few more tries, I could’ve figured something out to make the edges a bit cleaner. The biggest issue with the resin was the 24 hr curing time; it’s on me, some, for setting myself up with not too much time, but I think I’m also just a little impatient, and 48 hours per each round of rings (combined rubber mold curing + resin curing + about 4-5 hours in lab each time I was working on the rings) is just a little too much. It’s even more if you do things correctly and suspend layer by layer so the suspended material doesn’t sink to the bottom over the curing time.  I am just…. Too impatient.

Question 2: I actually fell through on a majority of my initial plans for the new skills. I do plan on coming back to learn to use the lathe at a different point, and I might do the same for the CNC if I have any ideas that might make good use of it. I did brush back up on my Universal laser cutter skills, but not the epilogue. After everything, however,  I did learn a lot about resin casting, and some about pourover rubber molds. I’m pretty happy with the depth vs breadth tradeoff here, and can definitely see myself working with resin on personal projects. …Assuming no strict timeline, that is.

In terms of my other goal- I think I achieved it? For this project moreso than others I was driven a lot more by something that I wanted, that I physically wanted to have and fiddle with. As a result, I think I was a lot more content with the result, even if it went off the rails a bit from what I expected, because I still wanted whatever random thing I was going for. Concessions made because of time or unexpected limitations felt less like concessions and more like… an alternate route. I still want to try again on the resin, but I am also genuinely happy with what I have/learned/got out of the experience, more so than I think I was with previous projects.

Question 3: Two big things: Iteration iteration iteration, and the knowledge that it doesn’t hae to come out perfectly on its first iteration, or even whole. Part of the issue is, of course, giving myself the time to iterate, but also to counter my tendency to do The Entire Project At Once Right Now because sometimes I get overexcited and try to actualize everything I’m imagining at once instead of, like, learning to do things in steps. (See: sewable LED, even the resin rings to a small extent). I think that tendency has also stopped me from doing personal projects in the past, because specifically for personal/art projects, I don’t like starting unless I think I can do it well. But, among everything else, this class has hammered it in that sometimes you just need to start, and be willing to let the first prototype be less than ideal. Maybe this is just leftover habits from too much procrastination; either way, the class has been a very, very valuable reminder of why Iteration!!! Is so important.

Question 4: I have a lot more small skills that I really value, now. For stuff like learning how to use certain tools and machines, I always really want to learn, but am very bad at asking people for help. I then try to learn things on my own, but self driven teaching can be hard, especially when its not something that Needs To Be Done. This class was an excellent way for me to get over that first hurdle of just learning how to use the thing, so I can then use those skills however I want.

I’ve always had a particular love for hands on stuff. Most of it was in the 3d realm, with stuff like sculptures or figures/animals made out of pipe cleaners or twists ties or whatever I had on hand. I also have a particular fondness for power tools. I love making things with my hands- that was nothing new, but I think it’s a pasttime I kind of had to put to the wayside in recent years. This class was a good reminder of why I love this kind of stuff so much and also a very compelling incentive to keep it up afterwards. I think I always scounted myself as  alittle of a maker, but now I remember that I can still continue to be one, as extremely cheesey as that sounds.

Like, all joking and assignments aside- I really, genuinely loved this class a lot, and the way it was taught. It was an excellent experience and I regret almost none of it.*

*the almost is there to account for the 10 hours spent on copper tape. Curse you, copper tape. I love you, love me back.