For my final project, I made a real life Minecraft Redstone simulator. It includes lamps, redstone torches, and various redstone path blocks. When placed in the board according to Minecraft’s rules, the torch can power the lamp using the redstone as wires. Overall, I think it turned out well. I’m especially happy that I was able to make it functional while also preserving the Minecraft look and logic. 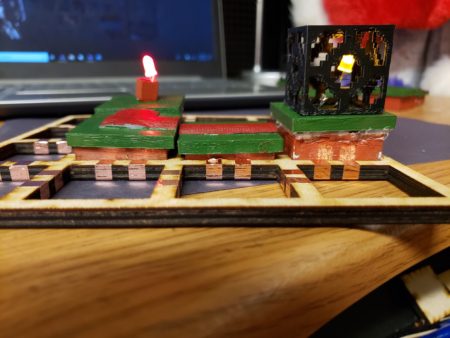 While working on this, one of my recurring challenges was sizing. I wanted the blocks to have a snug fit into the board, but also easy to remove and put it. After lots of trial and error, the size I went with was the best I could do. It’s relatively easy to put pieces in and take them out, and usually the pieces are snug enough to make connections. Occasionally the pieces get stuck or don’t press up against the connections enough, but this iteration is far better than my previous attempts.

One of my other ongoing struggles was figuring out the best way to solder the wires to the copper tape. My first method was to solder onto the tape and then put the tape in the blocks. This made it easier to solder, put the tape kept ripping and I had to start over anyway. Eventually I started putting the tape down first and then soldering directly in each block. This had the positive effect that the tape ripped less, but occasionally the plastic blocks distorted a bit under the soldering iron’s heat. Luckily the effect on the plastic was minimal enough that I could keep using this method.

One of my goals with this project was to resist solving a problem in the way I’m used to and look at it from a new perspective. When I work on projects for fun, I usually come up with solutions that feature programming heavily; any wiring is just a means to an end. That’s why I decided to work on a project that had no microcontroller, but lots of electronics.  It was quite interesting to see how some of my instincts when problem solving transferred nicely while others had to be ignored. For example, when debugging code I’m used to trying to isolate the source of the problem before fixing it. This was still effective when figuring out why a circuit wouldn’t work : I needed to figure out if it was a problem with the tape or the soldering or the board. However, once I found the error I had to change my mindset in order to fix it. With software there is always a hard, factual reason why the code isn’t doing what I want it to. With hardware, sometimes things just aren’t pressed together enough or a wire needs to be replaced. It was harder for me to figure out these errors that would pop up out of nowhere, but eventually I got better at adjusting my approach to fixing these problems. Working on a project in a different way than I normally do allowed me to both develop new skills and apply my skills in other places.

My second goal was to make at least one prototype for each component before moving on to the final piece. I was successful since I had 2 board prototypes and a number of block prototypes that I decided to change before the final product. This turned out to be very helpful in multiple ways. Obviously, it was helpful to learn from the mistakes I made while creating the prototype. I had several minor problems while using the laser cutter and while figuring out the size of pieces, and the prototypes gave me a chance to fail early so the final product looked better. I also found it was easier to foresee problems and work around them when I could hold the physical object. Being able to actually manipulate something similar to my project made the flaws clear in a way that tinkercad models and sketches couldn’t. I was also less afraid to try new things while testing my pieces since I knew it wouldn’t matter if a piece broke. Though some part of me still prefers to just jump to the final product, this has been a valuable experience in showing me the benefits of slowing down.

In order to learn a new skill, my final goal was to use soldering. The process seemed a bit intimidating at first, but I came to see that it was like using a hot glue gun, just a bit more complicated. I started practicing soldering by connecting wires before moving on to my actual project. Overall I’m glad to have learned a new skill, although the task grew a bit tedious at times. However, I was pleased to notice that it did get easier as I practiced more. I became better at figuring out the best way to place wires and the soldering iron to make a good connection, and each connection started to take less time.

With all 3 of these goals, I noticed a common trend: they got easier to accomplish the more I did them. As I stated, approaching the problems from a new point of view was difficult at first. However, the possible problems I was with faced were glaringly obvious at the end of the project because I had spent so much time fixing them. Though prototyping instinctively felt counterproductive when I started the project. When I started making different types of blocks it became second nature to make a quick test block so I didn’t waste so much time. The first time I walked up to the soldering iron I was a bit frightened by the whole process, but the last time the whole process became natural. All I really needed to do to meet these goals was to give them a try, and it soon became no problem at all.

Reflecting back on this class as a whole, I find that this tendency for the start to be the hardest part isn’t unique to my final project. I have a tendency to shy away from hands-on work. One of the reasons I took this class is that I wanted to learn how to use these tools and I wanted something to force to do that interactive learning. Throughout this class I’ve found its gotten easier and easier to do these assignments and just start working with the tools. Much like the goals I set for myself in this final project, once I became familiar with the fab lab I felt better about using new tools and starting new projects.

In fact, the ease with which I came up with ideas is probably the most surprising thing I’ve come away with. I’ve never considered myself a particularly creative person. However, with every assignment I had to juggle around several ideas before deciding on one.  I still have ideas for a whole bunch of projects I may or may not ever get to work on. I think these bursts of inspiration are partially due to how accessible all the tools are. I’ve never had easy and cheap access to a laser cutter before, so I didn’t really entertain ideas that would require the use of one. However, with my new knowledge where to find and how to use one, it’s quite easy for me to some up with ideas for new projects.

This shift in how I view my own creativity leads me to see a similar shift in what it means to be a maker. Its not that I wasn’t creative or didn’t have ideas before, I just needed a different perspective to make those ideas come to light. Similarly, I think being a maker depends heavily on individual perspective. Every person who creates something is going to put a unique amount of effort, thought, time, and skill into what they create, and those measurements could vary wildly even for people working on the same project. This is combined with the experience and values which leads to each person’s opinion on what it takes to be a maker. The situation is similar to our discussion on what it means to be a gamer. There’s so many factors at play that there can be no clear cut answer. At the end it makes the most sense to say someone is a make if they say they’re a maker. Personally, I would say everyone in the class is a maker. Every week we come in go through the process of designing something, learning to use the tools, and fixing problems. To me that qualifies as making, but others may disagree.