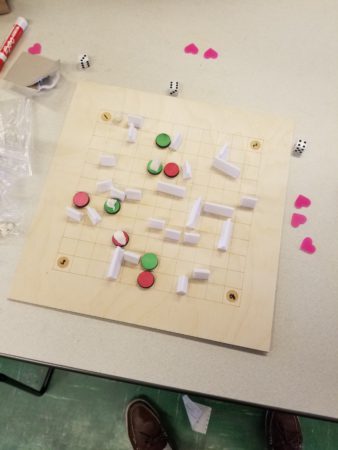 I developed a fun strategy-based board game that can be played by multiple players. The game is turn-based and contains mechanics such as chess-based movement and attacking other players. The board is a rectangular grid. Players move and can attack other players. There are obstacles which players can use to shield themselves from attacks from other players. Power-ups are used to enhance offensive bonuses.

I faced several challenges along the way. One part was what technologies I would use. I downloaded models from Thingiverse and printed them with the resin printer, which turned out to be very detailed. Another was printing out the barriers, as with 3D printing it took forever and I was on a time crunch. I consulted James and he provided suggestions such as laser-cutting pieces and assembling them together, but I ultimately did not apply this idea because my project would require me to do those prints 30+ times, which was not feasible in my opinion.

Another challenge was the overall design of the game mechanics. I consulted my friend Miguel, a board game specialist, and asked him for his input on the game rules I had devised. One major implementation that he designed was the concept of a counter-play, since before, players would have no method to defend themselves against an attack.

In-progress pictures of the materials: 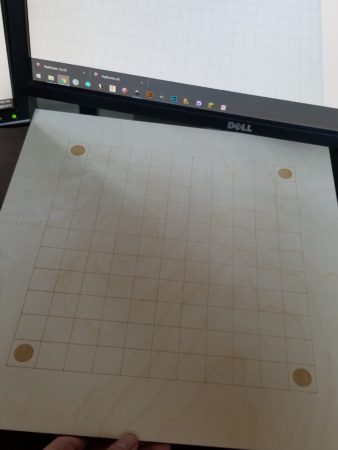 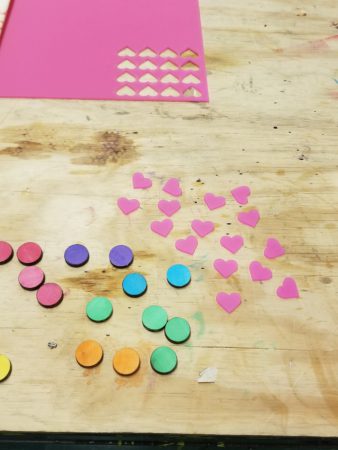 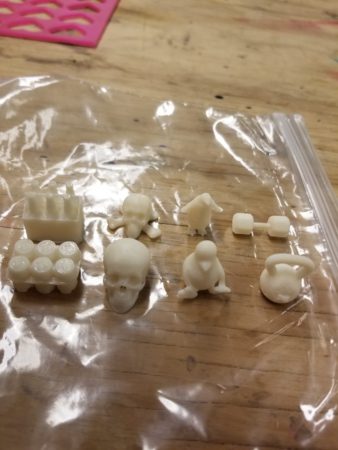 My learning goals for this project were: to use a new technology that I have not used before, and to push my creativity with this project and come up with unique game ideas. This project would essentially build upon the skills I have learned so far in this class, combining multiple areas into one.

I also wanted to create a game that was creative and that people enjoyed. This is pretty difficult overall and even though I spent time considering different pros and cons of gameplay and that I like playing my own game, I am unsure if it would appeal to a wider audience. Rules and game play will have to be carefully tuned to ensure that the game makes sense and is playable, and is one that is truly strategy-based.

I think overall I met both of my goals. I like my game and think the outcome turned out decently.

This class taught me how to pick up new technologies and how to learn them effectively. I think my TA Emilie accomplished this quite well in her instruction of my section. These assignments would include a short lesson and then building a very simple product, and then creating more complicated versions that would be used in the turned-in lab assignment. Initially I was uncomfortable and wasn’t sure if I should stay enrolled in this class because of the implications of having to force myself to be creative, but I turned out to like it, and so I’m glad I stayed because I’m proud of myself and the things I’ve learned and made.

Question(s) 4: Has this course spurred you to think about yourself differently? And/or future goals and interests in life? Do you consider yourself a maker? What does that mean to you now that it didn’t at the beginning of the semester?

Some questions to help your thinking: What does it mean to you to call yourself a maker (or not)? Who do you think should call themselves a maker? Early on you read a quotation from Seymour Papert who suggested the most significant learning is a) hands-on and b) personally meaningful. Does that quotation mean more to you now than it did at the beginning of the semester? What does it mean to you? Did you experience any learning this semester that fit this definition? Did the hands-on nature of the class make your learning more significant? Why and how?

Makerspaces encourage the development of both the technical and the creative aspects of people. It’s a very hands-on and practical area and also open toward people. I think one thing this course has changed in me is that it has helped me want to learn about not just why, but also how things work. I guess this means that I’m a maker.

Notwithstanding, ultimately being a maker is up to how you define it. If you make things, does that make you a maker? There are some specific things that people consider a part of makerspaces but I question that they are requirements to be considered a maker. In my opinion, if you can consider yourself a maker, then you are one.

I think making something hands-on and meaningful is definitely important, and I think I’ve accomplished this during the course of this semester. I think understanding makerspaces develops as you do it more. It’s a constant learning experience for everyone and it doesn’t stop.