We were first taught sewing by sewing along some guidelines on a scrap piece of cloth. I felt that by the end of this practice, I had gotten the hang of using the sewing machine to sew curved lines. Results below. 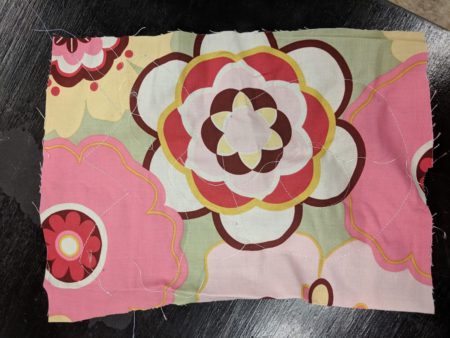 We then sewed a drawstring bag. As I expected, I followed the sewing instructions successfully. However, I didn’t expect the results to be as good as they were.

I was surprised by how simple the sewing instructions were (just sewing along 2-3 different straight lines repetitively), and the concept of sewing inside out and later flipping your project right-side out was mind-blowing. 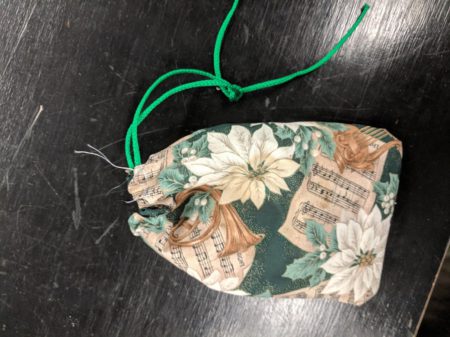 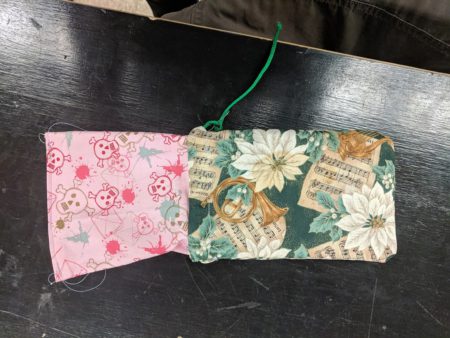 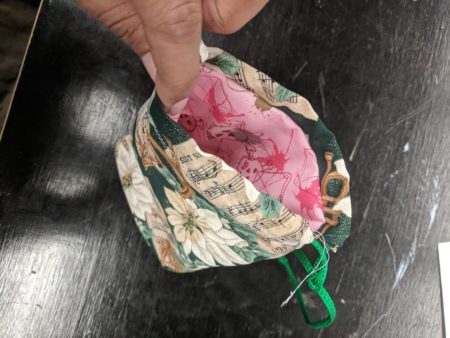 I asked my girlfriend to pick what to make – and she chose the bat plushie. The project required fleece in one primary color, and an alternate color for the insides of the ears.

Most of the fleece available were in very bright solid colors. I did find one roll of black fleece, so I decided to use that as the primary body color. I found another roll of fleece that had a colorful floral pattern. My girlfriend likes flowers, so I thought this would make a good alternate ‘pattern’ rather than any of the other solid color options.

I happened to like the floral fleece a lot as an alternate color. I decided to also use it on the bat’s wings.

The face required features to be ironed on. I cut them out from felt. This is how it looked. 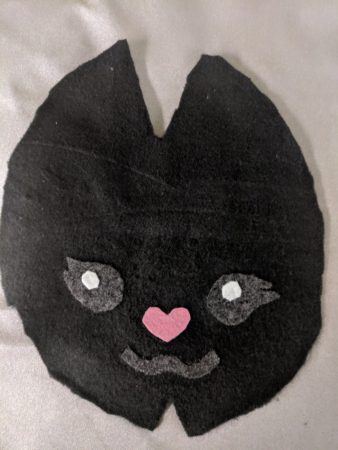 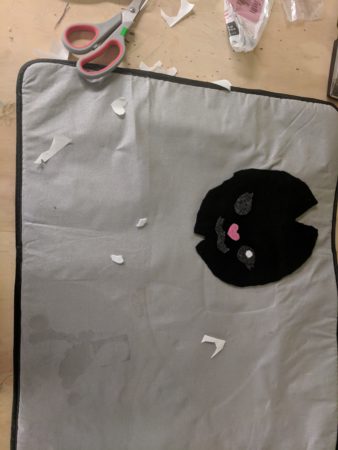 I then began sewing the backs and fronts of each ear, and I was very happy with how they turned out 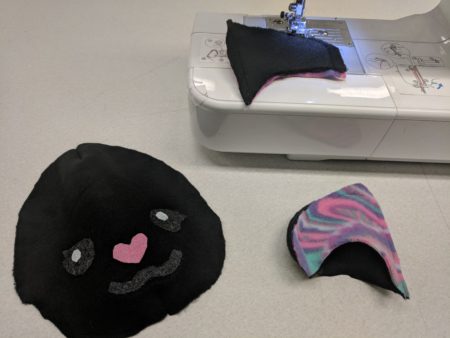 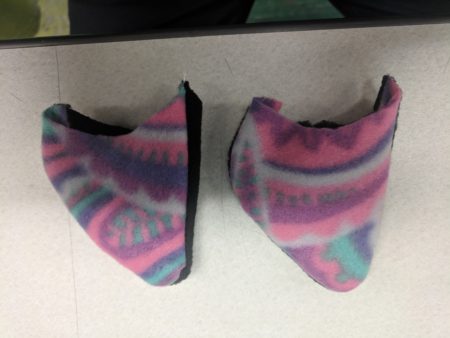 At first I thought this was unfortunate. But I later felt that this could be a cooler look. I decided I would make the wings different also – if the right side ear had floral on the inner side, the right side wing would have the floral on its back side.

I had to “baste” a fold on the ears. This confused me a lot, but I determined that this simply meant I need to sew a single line and hold a fold in place. For me, this was any normal sew I was doing.

It is important to note that when I was sewing a fold into the ears, I was sewing into 4 layers of fleece. It was extremely thick and wouldn’t easily pass under the sewing-foot-bed-thing. Every sewing from this point forward in this project involved more than 4 layers of material. They were very difficult – involved me pushing the material downward to fit under the sewing-foot-bed-thing, and also pushing the material forward since the sewing machine wasn’t able to pull and move my material on it’s own. On top of this, when you throw in curved stitches, its not going to end well.

This is how sewing the ears onto the head turned out. 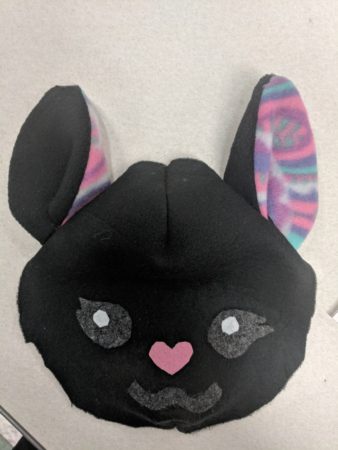 Next steps were finishing the wings, adding top-stitches on them to simulate a bat’s webbed wings and add definition.

One very challenging step when when I had attached my finished wings to one side of the body, and then needed to attach the second side of the body to the first. This involved sewing the body pieces together with the wings folded and tucked inside. The body then had to be turned right-side out to get the wings on the outside of the body. I was most worried that while I was stitching the body shut with the wings tucked inside, I would accidentally stitch the wings down to the body. They would then be stuck inside the body and I wouldn’t be able to pull them out. I finally avoided that, but the sewing wasn’t pretty or easy.

Up till this point, I actually was very excited about what I was making, and I was very confident that it would turn out very well. The black and pattern stuff was working out so well, and I was happy with how the felt face features had been successfully ironed onto the face. From here forwards, things took a turn for the worse.

Next step was attaching the back of the face to the front of the face (the front had the ears and face features). I had to sew in a circle along the edges of the face, and also occasionally sew over the ears also. So this involved sewing in a long continuous curve, and occasionally forcing the machine to sew over 6 layers of material (4 layers from ear and 2 layers of face). I wasn’t able to follow a perfect circle along the edge of the face. I sewed inwards too far, and the result is that the face is not perfectly circular. It’s almost triangle shaped.

Unfortunately (or fortunately) I have no pictures from these steps. I finally needed to attach the head to the body at the neck. I had to first sew half of the circle of the neck. Then fill the head and body with stuffing. After that, I had to hand-sew the remaining half of the neck-circle. I’ve never hand-sewn before. 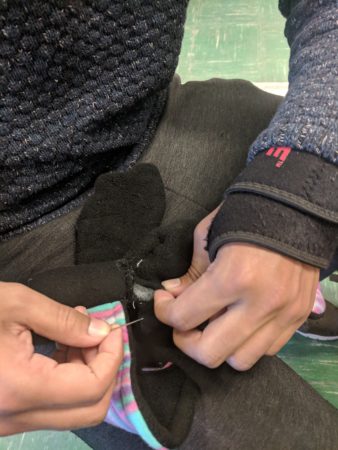 Annnd now the final result, with the triangle head and the badly hand-sewn neck. 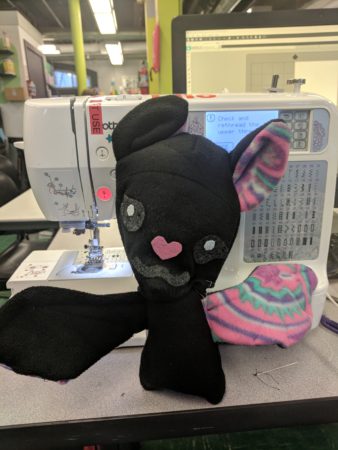 On the bright side, I ended up learning a lot about hand-sewing. I had to go back and fix a lot of sections of the neck that I hadn’t sewn securely enough. I think I taught myself how to “fix” things with sewing by the end of this. So that’s cool.

My girlfriend likes reading books and playing The Sims. Since I was making this plushie for her, I wanted to incorporate both those things into an embroidery that I could later stick to the bat’s body. 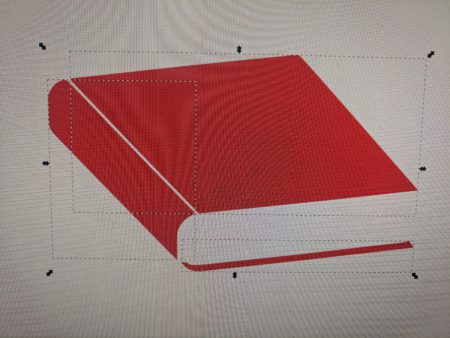 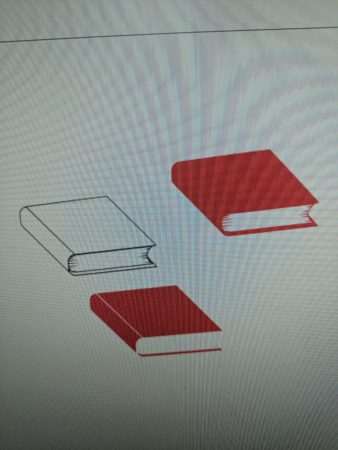 I feel like I’m getting better with InkScape now. I measured the bat’s body and it was 1.5 inches big, so thats how big I made my embroidery patch. It is a book with the green Sims diamond on its cover. The colors involved were blue for the pages, black for borders, red for the book cover, green for the Sims diamond. 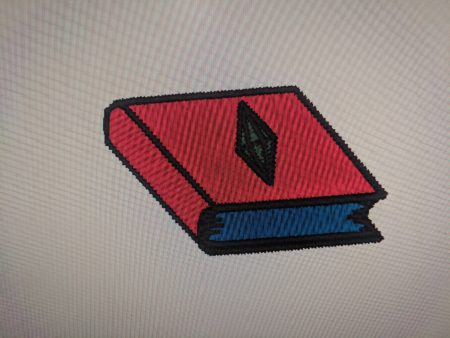 While picking string colors, I switched them for colors that my girlfriend picked. We went with a purple book cover and light blue diamond. 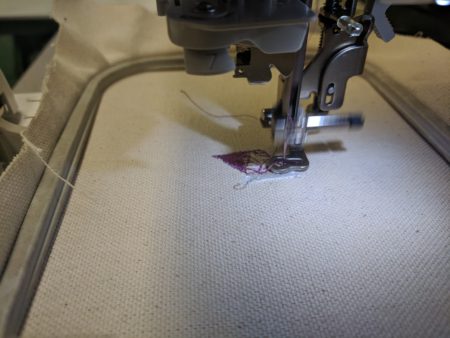 I then ironed the embroidered patch onto the body. 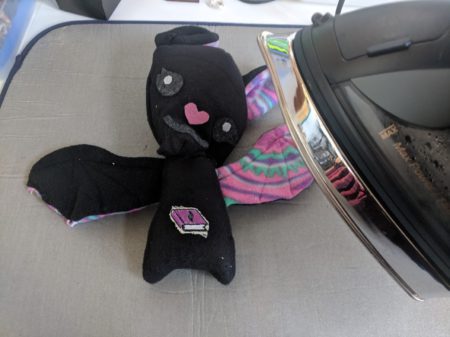 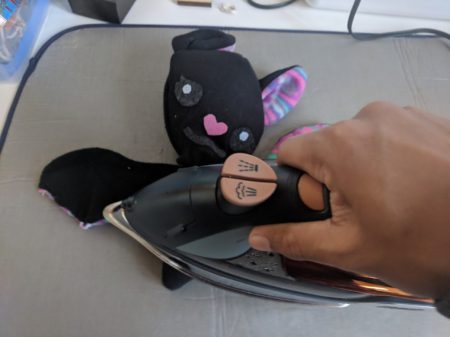 Surprisingly, the patch bonded very well to the body with the help of Heat-N-Bond.

I might use my hand-sewing skills to secure the edges better. 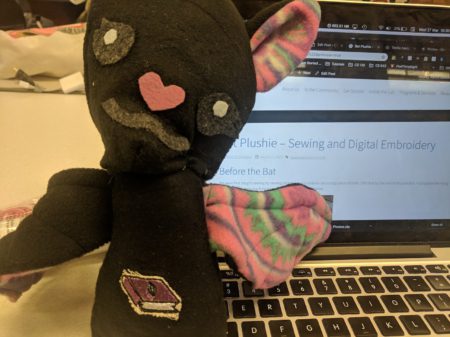