Locomoting Pom Pom Bots We continued on working with Arduinos, and the goal for this week was to make a pom-pom bot that moves from point A to point B.   Initial Design: Inchworm In lab, I made an inchworm that moved like an inchworm, but didn’t traverse across a surface. So, I thought I […]

Intro to Arduino This week, we learned to use an Arduino. As a computer science major, I was pretty comfortable with coding, but was fairly new to using electric components. Thankfully, the course was quite clear on what I had to do, so I did not have much trouble with using the Arduino. Blinking LED […]

Fabric and Embroidery For the past few weeks, we were introduced to sewing and embroidery. For the first week’s lab, we made a simple pouch that closed with a ribbon. Although it was my first time using a sewing machine, the instructions were simple enough for me to follow. For the second week’s lab, we […]

3D Printing We learned about 3D printing for two weeks, and using various software, and scanners that could be used to create printable 3D designs Part 1 First, we learned about Tinkercad, which is a very simple 3D modeling software. A huge benefit to Tinkercad is the fact that it’s accessible online, and even works […]

I created the Dog Bird and Spiderman logo during the lab section as we were introduced to making multi layered stickers For the assignment, I started off from an icon of a person with headphones on. I decided to add sound waves to represent the music being played, and put everything inside a bubble, as […]

For the storyboard, we choose a smart table for a restaurant setting. The smart table could give useful information about the food in a restaurant. There are many uses for an interactive, smart menu, and the aspect I focused on was providing visual information along with a simple description of the food. I enjoy going […] 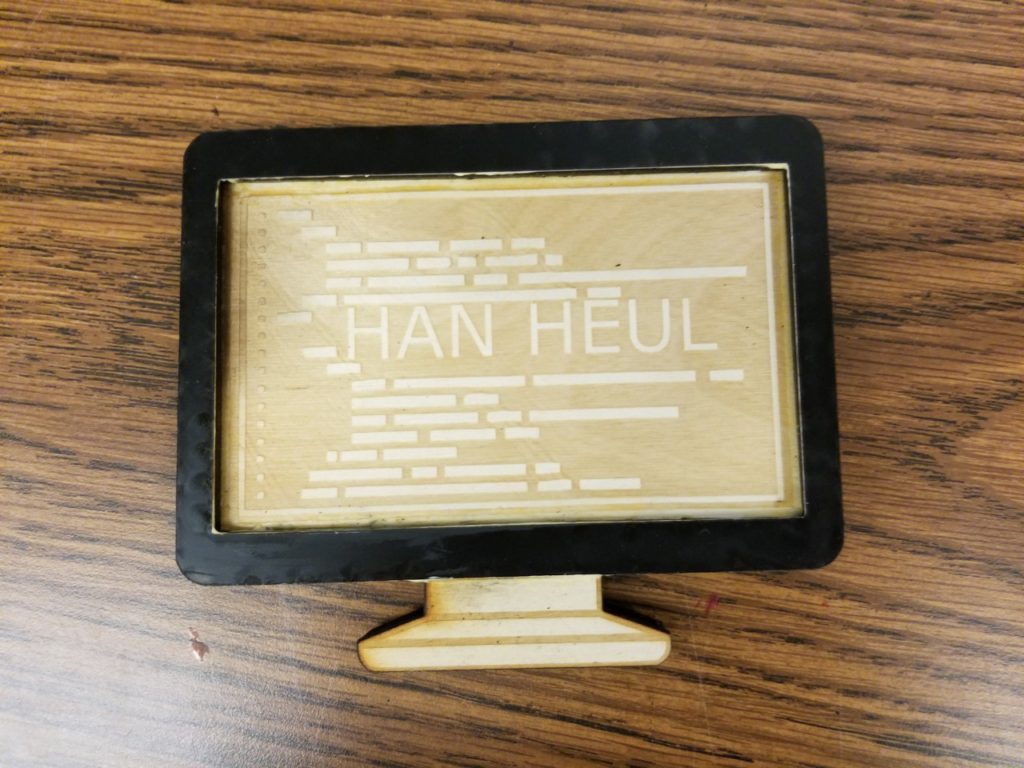 Motivation﻿ For the first assignment, we designed and made a name tag using a laser cutter. I wanted to incorporate my passion for computer programming in the design, and I decided to design a name tag that resembles a computer monitor. Build Process Using Inkscape, I started designing my name tag. In order to make […]