For part of our textiles assignment, we were supposed to embroider a piece of our own clothing. I chose my victim to be a Yahoo shirt, just one of many free shirts that I have no emotional connection with. The final result was supposed to be Google’s colorful new logo, which would let me use multiple colors of thread, and was of a simple design that would minimize the chances of me having to re-embroider multiple times. I had already done some embroidering on canvas, so I wasn’t too concerned about how this would go. Unfortunately, my first attempt looked like this. 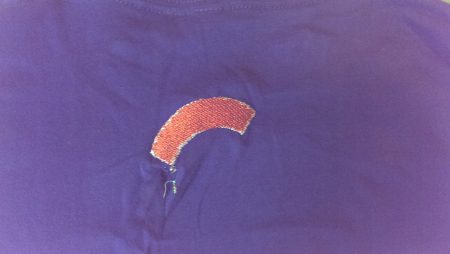 I should have known things were not progressing as they should have the moment I saw the white bobbin thread on the same side of the pattern. But I didn’t, and so when I started up the embroidery machine again after putting in a spool of yellow thread, it jammed. All this time the bobbin thread was not set properly, and even if I had seen it, I wouldn’t have been able to tell anything was wrong. After the machine jammed and decided to enact a death grip on my shirt, there was no choice but to separate the two with force. Hence if you look closely at the image above, you may notice a hole in my shirt. Slightly peeved, I went on to successfully embroider the logo on the same shirt. 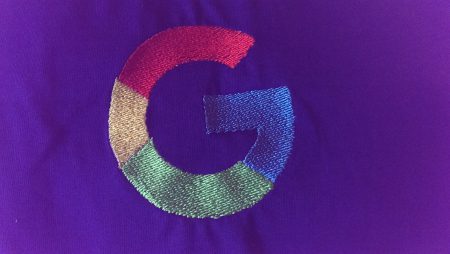 There is a noticeable lack of visible bobbin thread in the successful attempt, and for the most part it looks quite nice. If I was to embroider on a similar material in the future, I would not stretch out the fabric as much, since the logo looks a little scrunched up. Ideally, I would only be embroidering slightly thicker, stiffer fabrics in the future, as getting this shirt set up properly for embroidery was a pain simply because it was so stretchy. We were warned that shirts were a pain in general to worth with because the rest of the clothing tends to get in the way and it absolutely did since I spent as much time waiting for the machine to embroider as I spend tweaking the placement of the shirt and stabilizing paper. I know that there is no way I can totally prevent accidents like this happening in the future, seeing how many needles have been broken by my classmates even when they seem to have done everything right. Fortunately, with the help of the staff, this proved to be yet another great learning experience. It is safe to say I can now recognize the appearance of the bobbin thread as an omen of impending disaster.