I integrated a computer into my jacket, so that I could play a game on my jacket sleeve!

I used an Adafruit Flora as the computer that controlled the game, and I used sewable circuitry – particularly conductive thread, sewable LEDs and conductive fabric as the inputs and outputs of my game. 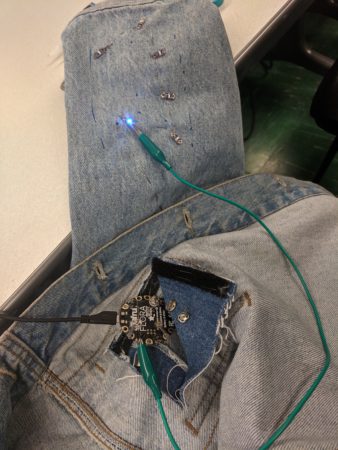 A big focus of this project was that this was my only denim jacket – I wear it a lot. I wanted my computer+game design to be robust against the normal usage conditions of the jacket. I roll it up clip it onto my bag, or I wear it on the nasty subway, or I wear it when it is raining. I wanted the computer to be safe from the dangerous environment, and I also wanted to be able to wear the jacket in all the normal situations that I’d wear it in.

I decided that the computer will be positioned inside one of my jacket pockets. That way

The computer is still a very delicate item, so despite the pocket safety measure, I wanted the option to remove the computer in a modular fashion. Traditionally, the Flora computer is sewn onto the textile (this would be tough to modularly remove a sewn on item). Instead, I attached the Flora to my jacket with snappable buttons (now its modular, I can unsnap the buttons attaching the item to the fabric).

The way this works is that the LEDs and buttons are sewn onto my fabric with conductive thread. The electricity on these threads is supplied by my computer. so these same threads from the LEDs need to connect to my computer. Instead, the LED threads are attached to the male ends of snappable buttons, which are sewn onto my fabric. The female ends of the buttons are attached to the input/output pins of my Flora computer. When I want to create an electrical connection between the LED thread and my computer, I join the male and female ends of the snappable buttons. The buttons conduct electricity and act as an interface between the computer and the thread sewn into the fabric!

I initially planned to solder the female ends of the buttons onto my computer. The solder would act as a “conductive glue” between the computer and button. This was a hard task, and the force exerted by the button-unsnapping process would always break the solder-connection I had created. I spent a lot of time trying to perfect my soldering process before I gave up. This was the biggest challenge of this project.

I’m most proud of how I solved this problem. Originally, The solder was acting as a “glue”, and a “conductor”. Instead, I used superglue as the glue, and conductive thread as the conductor! 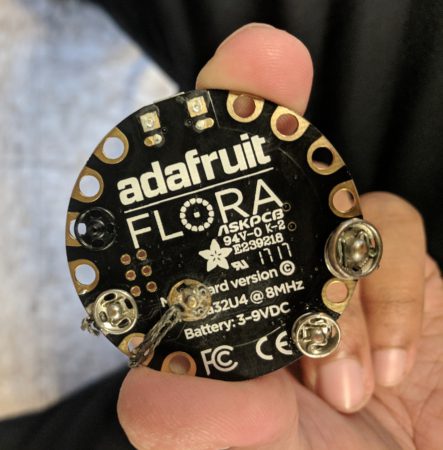 With this method, I circumvent another issue. Some snap buttons can be large, and they run the risk of either touching adjacent buttons or touching adjacent I/O ports. As seen in the above picture, I can glue some buttons far away from their respective I/O port and adjacent button, to ensure there’s no accidental touching of circuitry. I just need to create a longer connection between button and port with the conductive thread.

My learning goals were to 1) work with electronic textiles, and 2) also work on a project design that is entirely my own and iterate that design.

I believe I successfully accomplished both goals. I invested a lot of time into understanding how conductive thread and sewable circuitry works, I looked at many different implementations to understand the best practices, and I practiced my sewing technique and improved it majorly also. I hoped to learn how to properly “think” about a sewing project – what are the challenges, what difficult decisions need to be made, how to problem solve on a sewing project. I did learn those things, and I also unintentionally learned how to fix or undo sewing mistakes!

For my second goal, my whole project was my own conception, I borrowed the concept of making the Flora modular with snappable buttons, but I iterated that design by using superglue and conductive thread instead of solder. My design involved 2 types of circuits, so I made sure to sew those circuits into a woodframe and test that my technique would work correctly. After finishing sewing any thread line or snap button or any electric component, I stopped to ensure that the electric connection was still “correct” and worked. This allowed me to catch mistakes early, fix my technique and not repeat those mistakes.

I’m very happy with project, specifically because of how rewarding the learning process was.

I invested a lot more mental, physical, critical effort in the process of learning, and then I felt smart when I applied my new knowledge.

What really stands out to me upon re-reading past write-ups is that I was very conservative with my projects. I was afraid of failure, so I tried to structure my projects around the simplest techniques that had the least scope for errors. It shows because I rarely ran into road-blocks and was rarely forced to think laterally and problem solve. I would instead try to change my project to fit the outcomes of my practices.

With this final project, the requirement of formulating a challenging proposal within the structures of the two chosen learning goals was very helpful. It made me iterate my technique and process to fit the project instead of vice versa.

I really feel much more confident as a maker now – I understand now that failure isn’t such a big setback, and that working on sub-samples of the problem will allow me to catch my failures earlier and spend lesser time overall. Because of this, I feel comfortable trying new techniques and incorporating creativity into my problem solving.

People often say that your life can turn out completely different than what you plan out of college. You can work on something thats entirely outside your major, and you can be working in a work culture that you didn’t think you’d enjoy. I could not see myself in this position, adapting to my environment and pivoting my life’s direction. Its a little extreme, but I feel differently now.

Working on this project, I’ve shown myself that I can work in a domain outside my expertise (sewing and textile) and adapt and excel. Additionally, I can make a new domain my own by incorporating my expertise in other domains. I didn’t see myself having such flexibility, but now I think my mind has opened to the possibility. I was a little scared about making E-Textile the focus of my project, but I handled it just fine. Now, I wont say “No” based on my prior judgment, because I have the potential to surprise myself. I believe being a “maker” also means not saying “no”.  You have to be able to think on your feet and “find a solution” in the making process.

I learnt the E-textile process by working hands-on on a project that was personally meaningful to me. Both factors really accelerated the rate at which I learned e-textile. I cannot think of another circumstance that would have been more conducive to my learning process. I feel so confident in my abilities to sew circuits into fabric right now.