At the beginning of the assignment I wanted to make some kind of arduino using a motor as the output. My first idea that I wanted to try was using a touch sensor to control the speed of the motor. This theoretically would allow you to change the speed of the motor based on how hard you press the sensor. This gave me the idea of having a touch controlled handheld fan. To do this I looked at the touch sensor lab example we looked at in lab and tried to translate it into the motion of the motor. The initial code I tried is below. 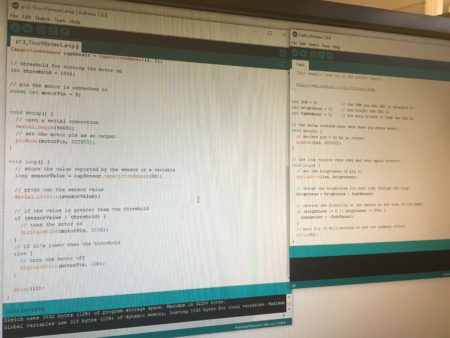 Unfortunately, this code didn’t work out as I expected it to, being that the motor would rotate fully after touching the sensor. Instead what had happened was the motor would move slightly and move back to it’s original position, as if the motor was just twitching. As a result of this I tested out the base code for running my motor to see if the code just didn’t work, which ended up being the case. After this I decided to look up how the control a motor with an arduino again, to see if I could find a different resource that could help me. After searching through youtube, I found some code that could help me, the modified code can be seen below. 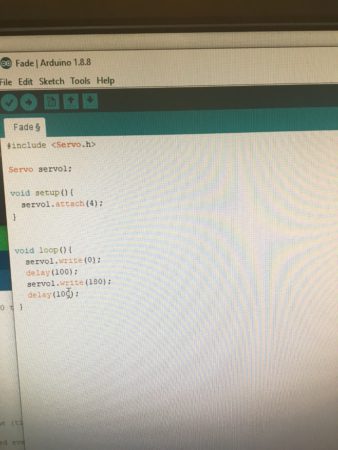 Instead of spinning the motor like I wanted initially this code made the motor spin back and forth, the video below displays this movement.

While not inline with me initial idea, it did give me a new idea. The movement reminded me of the scrubbing and cleaning. With that in mind my finished idea was to use a button to control a motor that would be attached to an arm with some kind of sponge or cleaning rag that would allow for the cleaning of surfaces without much human effort; as the storyboard below illustrates. 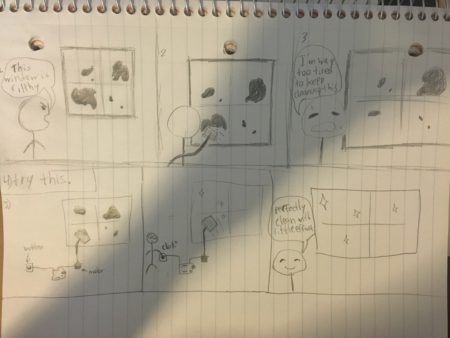 Unfortunately I didn’t have enough time to create an Arduino with both the button and the motor working together. Because of this if I did this project again I would like to give myself more time so I can actually test out a finished project so I can see how and if it works the way I want it to. Another thing I learned is that you need to be very specific when it comes to Arduino, as I stated before I had some trouble getting the motor to work, this was partially do to the code not being perfectly suited for the motor I had. If I had looked up the specific motor from the very beginning I likely would have saved myself a lot of time.

Outside of the issues I had, this project did let me see how an Arduino can be used to make different kinds of contraptions, theoretically. In my case it was an automated window cleaner and I’m interested to see what ideas my classmates had with their own Arduinos.