I learned how to make two motors work at the same time in class. I also learned how to change the starting position and delay time to make the motors go at a different time or different speed. This is the video of my first prototype going forward. Later, I found a way to make it go straight with two motors which is how I created my bots.

It was having difficulty going forward because it was heavy and the friction from the desk. I attached a popsicle stick to give a little support. I thought it would make it easier to move forward; however, now that popsicle stick is attached, it was having more frictions. I decided to give more support to the motors so they don’t have to carry way too much weight going forward. This is how I got to make my tarantula. 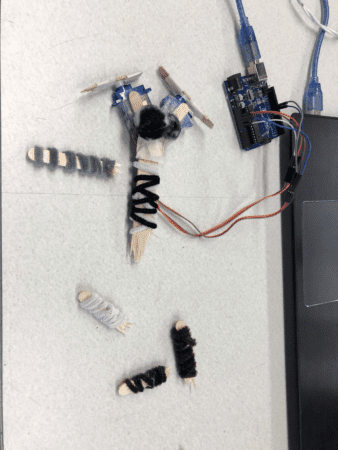 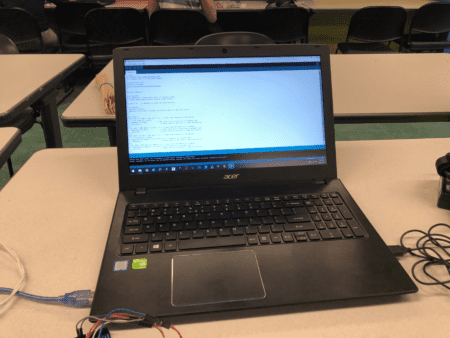 I made some change in my code to make the two motors go at a different time. This way, they could resist frictions and go forward more easily. 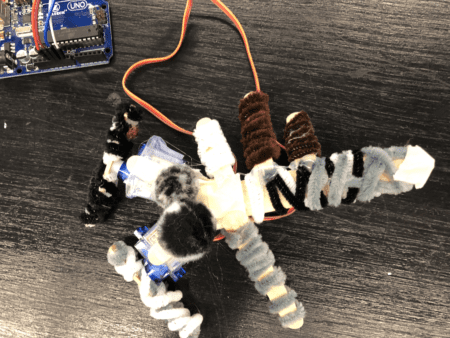 This is the final product of my Arduino bot. The front two legs of my tarantula have two motors attached and make the bot moves forward. I came to this design after figuring out how to move the front two motors. It doesn’t go straight so it reminded me of insects/animals that don’t move in a straight line. Some of the improvements I made to the first design are changes in code that make two motors work at a different time, perfect delay time and starting positions to make it go forward, perfect distance between two motors so they can resist the frictions, and support system from the popsicle sticks.

It was definitely challenging to make changes in code without help from instructors. However, my classmates who are familiar with coding helped me write codes and understand how to resist the frictions. I was kind of discouraged when it was working and other people were making such cool bots. I felt a little incompetent, but I figured things out myself and created this cute tarantula! It always feels good after I finish my project after having so many emotional obstacles during the process.

I’m just surprised by how many cool things you can do with Arduino. I hope to learn more skills so I can create more cool stuff with it.