For the in-class assignment, I thought a hatchet + log would be a cute and simple thing to create.

Using some cardstock and gray/black sharpies, I managed make a fairly accurate hatchet and a brown log. 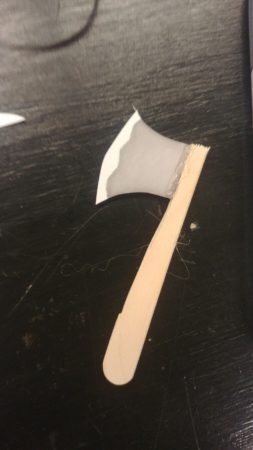 Then, I glued the log onto a large popsicle stick as well as the servo and hatchet. It was through some trial & error that I got the angles right. The Arduino program was mostly similar to the Sweep program with modified angles & delays in it, with the final result:

And then for the out-of-class project, I wanted to make a rowboat! It would have a boat base, and two grippy oars that it would “row” itself with. 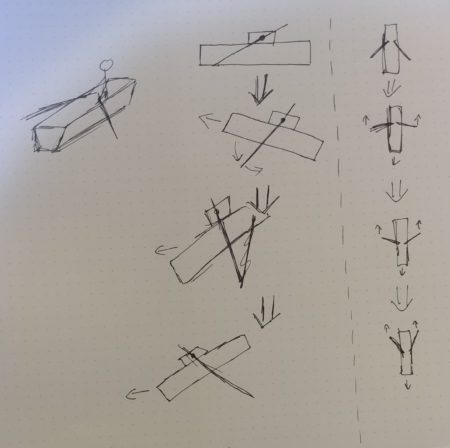 I realized that a repeated back and forth of the 180 degree servos might not let it move anywhere, but looking at the videos of previous bots, it looked like it might not be a problem.

In many of the videos, a slow forward motion and a rapid “reset” motion seemed to work in consistently moving the bot forwards. I thought that the reason for this might be because the slow forward motion lets the feet grip onto the floor better, while the rapid backward motion causes some slipping.

I trusted that the issue might not be something that needs solving, and began a prototype build.

This part was where I made the mistake of not taking many photos – but I originally had imagined this boat using only one servo. Since the two oars will make a symmetric motion, I thought about connecting the two oars in the middle, and letting one servo move both oars.

It was about an hour into this idea that I realized it’s a bad idea. It adds a lot of complexity, cramps the space, and requires a lot of precise holes and measurements.

So, crapping that idea, I kept the frame and attached two servos. Each oar has a dab of glue at the ends to keep it from slipping. Then the prototype/proof-of-concept was complete! 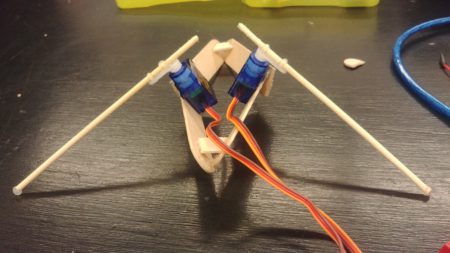 Then, I made someone to row the boat with some pipe cleaner, attached some actual paddles to the ends of the oars. I glued the little guy’s hands so that it can actually grab the oars :’)

The actual code wasn’t too different from the regular Sweep code either. After changing some delays, I just had to make sure that one motor goes from 0->180 while the other one goes from 180->0 since each servo is rowing on the opposite side of the other. Then, here was the final rowboat in action!

And by then I had already gotten out the googly eyes and then decided against putting them on the stick figure. So: 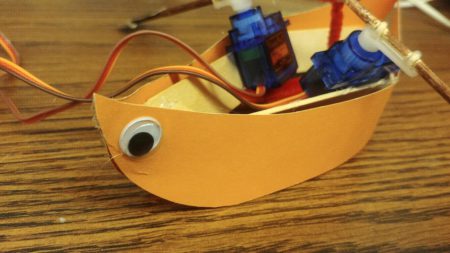 I felt that the hardest part of this project was the “getting it off the ground.” I especially felt this when going with my original design of using a single servo, but when I was trying to figure out how big, how far apart, or how narrow things should be. It felt like everything depended on everything else, and I couldn’t find a way to “incrementally” create what I had in mind without creating the whole thing at once. This was mainly because of the issue of not only moving parts, but parts that would swivel and slide past each other. I knew I could make drawings and measurements, After that though, I’m really glad that I opted for a two servo design.

Another difficulty was, really, just getting the boat to go straight. One oar kept getting better contact than the other, making it turn rather sharply to the right. I tried fixing this problem by adding shims to the bottom of one end, but that made it begin to turn the other way. After some iterations of trial and error, I finally got it moving straight enough for a 9 second video 🙂