This week in lab, we began to use Arduino.  As someone who has never used an Arduino device or the software, it was an interesting project.  I do have a slight background in coding, but I only know a few basic things from languages such as Python.  Due to this background, I did slightly understand what Duncan was teaching us, but it was difficult adjusting to the language.  For the first example that we worked on in lab, we made an LED blink.  I followed Duncan’s instructions exactly, but initially, the LED would not even turn on.  I asked my neighbor for assistance, but he didn’t know what to do either.  We began to ask Duncan for help, but my neighbor bent the LED in a specific way, and it suddenly began to work.  After that, we were told to manipulate the program to have the LED blink “SOS” in Morse Code instead of 1 second intervals.  After changing some variables’ values and adding a few more lines of code, I successfully created the SOS message.  I then decided to have the LED spell my name.  It was quite fun figuring out what times to set for the delays and blink durations.  For the next activity, we were told to use alligator clips and aluminum foil to function as a touch sensor. 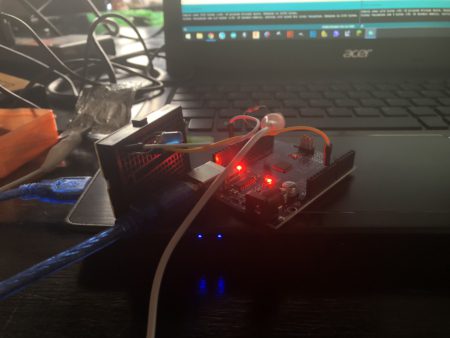 We then ran a new program to light the LED when the aluminum foil was touched.  It fortunately worked.  We were then told to manipulate the program to cause different outcomes to occur.  I decided to make the LED light up when a force within a certain range was used on the foil.  If too much force was used, the LED would turn back off.

For the last activity for this lab, we were asked to make a storyboard for a potential Arduino device incorporating a sensor of some sort.  I decided to make a storyboard about a device that would help tone-deaf people see where their notes actually are on the scale in order to work toward improving their singing. 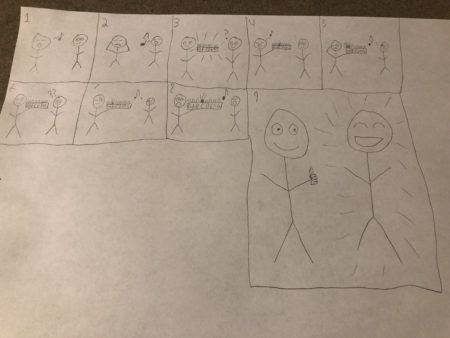 Overall, this was a fun activity using devices that I have no experience with.  I look forward to this week’s activity.