This week’s assignment was that of two parts, an in class introductory 3d model and, a batch of different prompts that we had to complete using 3D modelling software as well as print one. The three prompts I chose to complete were: 1. cutlery for your enemy, 3. insert yourself into a piece of famous art, and 4. make a part you need. The prompt I chose for my one print was the part that you actually need.

Overall this project was tough! I definitely spent more time thinking about the prompts then actually working in Fusion. Oddly enough the part I needed and printed took the least time to plot out. To be fair though, my printed object was just a rectangular prism that has had two subtractions. The other two models I made use different functions like loft and editing face meshes. The printed part was more plug and play while the other two were a design challenge.

In class we were given 15 min to design a castle in tinker CAD. I spent 10 of these minutes trying to figure out how the heck to make an arch. Turns out that you cannot rotate faces in tinker CAD so, in a mad panic, I threw up some castle wall and made concept art for a white castle. We then took our shoddy models into mesh mixer to toy around with various tools. The amalgamation shown below was the final product at the end of the session. 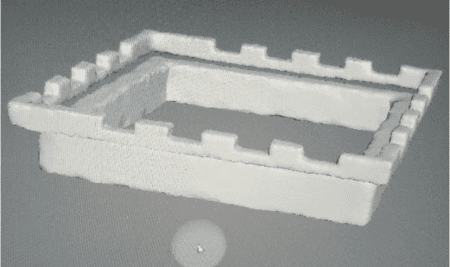 The next pictures will be answers to a few of the prompts that were laid out for us a couple weeks ago.

Ok, so this prompt, Cutlery for your enemy, ended up a bit weird but in a way I accomplished what I wanted to do. I included both the meshmixer picture and the fusion picture because the small metal disks (right) did not show up as well in the meshmixer picture (left). The original design was to make a whisk with metal disks at the top where one’s thumb would go and a bumpy sticky looking handle. The metal disks are placed where the user’s thumb would go, or where the most pressure would be applied. After some use these metal disks would probably slice the users hand. Moving on to the second modification, the handle was meant to be sticky-looking because that’d be terrible. I thought that if I were to use meshmixers’ brushes I could achieve some sort of residue looking pattern. I ran into the same issue we did in lab with there not being enough polygons, so I tried to remesh. Remeshing ruined everything so I had to revert everything. I ended up playing with the brushes at random and came up with the bumpy handle (left). So, this metal-slicing-disk-bumpy-sitcky-handle-whisk is the perfect gift for your latest enemy! 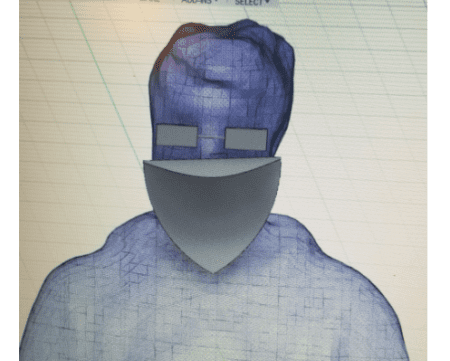 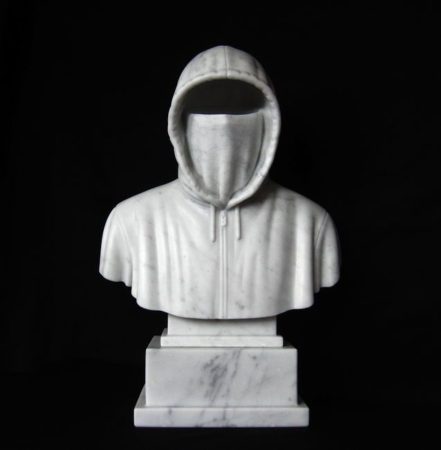 Pictures 4 & 5 Me 3D scanned using fusion and a piece of famous art found on google images.

This 3D model addresses prompt number three on the assignment sheet. We all scanned ourselves during last week lab and, when doing so, I made myself as low as a polygon render as possible because I knew I wanted to do some sort of bust. Through my googling I found that busts are WAY more detailed then most images. That is not to say that the image on the right is low detail because I chose it, but it was the easiest to incorporate into my 3D model. The bust was sculpted by Chris Mitton and is supposed to be modern iconography in a classical medium. I was already wearing a hoodie so having two hoods would look weird thus I had to find another way to make me look anonymous. I was able to make a complex mesh and seemed as though it was a bandanna wrapped around my face. Then I threw on some shades because I thought it was lacking. 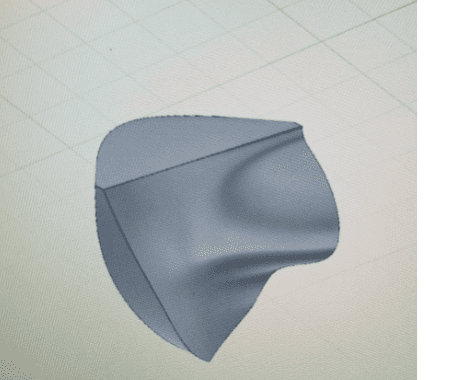 This was the mesh that I made using two center arcs connecting with a line. I then added a anchor point in the middle of the top line so it can be bent outward. I then used the face mesh editor to pull some vertices out, creating the warps you see above. All of this made it seem that the bandanna was kinda attached to my face. 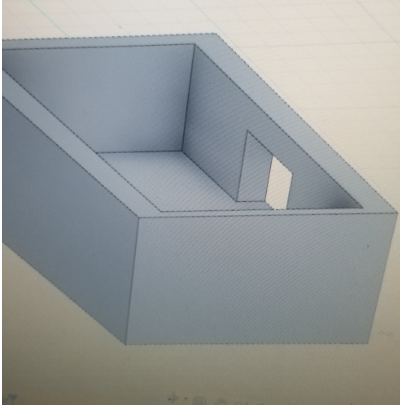 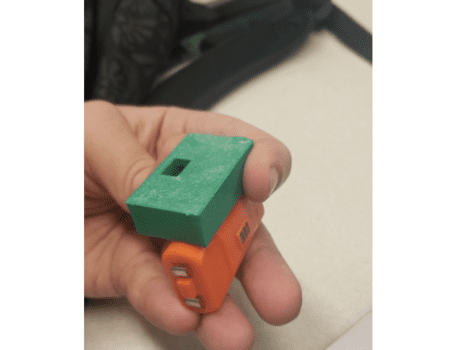 The final prompt was to make a part that I needed. Would be silly to do this one and not print it thus is why I printed it. Starting out, I took measurements of the orange battery pack (right). Once I constructed a prism with the dimensions I needed I made two subtractions. One was to make a cavity for the battery pack. The other was so that I could snake a micro USB through the bottom. The picture on the left has the small hole in the wrong spot, I fixed it in the right picture. Where I messed up (I guess) was making the fusion model in inches instead of millimeters. When I imported the .stl into the flashware it came up as the inch measurements but in millimeters, so it was tiny as heck. I googled the conversion and scaled it. The right was the end result, didn’t print right at all. 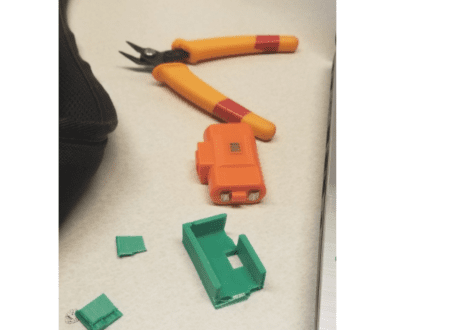 The height and depth were manageable but the width was not. So, I tried to clip them off with clippers. The model was too sturdy though so it just snapped and broke.

Overall I don’t think the biggest challenge was designing for 3D modelling but actually navigating the software. My prior experience in 3D modelling was using 3DS MAX, and its was more of a sculpting software, (atleast that how I used it). When making an arc, not have to sketch a line and loft it. I could just keep extruding the same circle and rotate the face a little bit to form a curve. the process of getting there is always the hardest, never the execution. The battery pack wall mount is a contender for my iterative project for sure. I have these modular slots on the front face of my computer tower and could possibly make a charging try come out of it. Would be really cool if I pull it off tho.