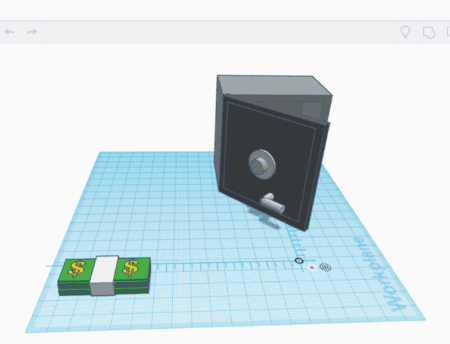 For the brief in-class CAD project, this was what I made.

On the left is the alien, there are many people after him because he looks a lot like something they want. Unfortunately he’s unable to fend them off because he’s his limbs are paper-thin.

On the right is the castle that he lives in, the door is a very secure combination lock. Really, it’s the only place he feels safe.

Importing him into meshmixer and losing all the colors, it looks quite dull: 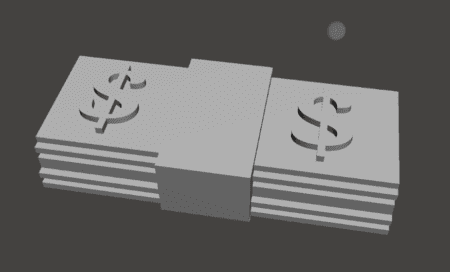 My attempts at making it less dull – wielding tools that weren’t meant for the sharp corners and flat surfaces of TinkerCad species – I was met with disastrous consequences: 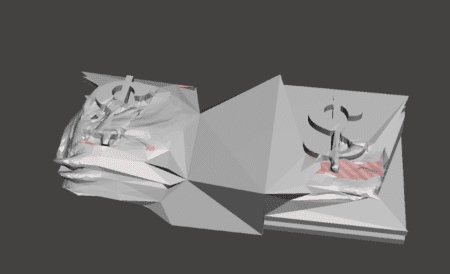 But after a bit of messing about, I managed to get my intended, spongy appearance out of it. 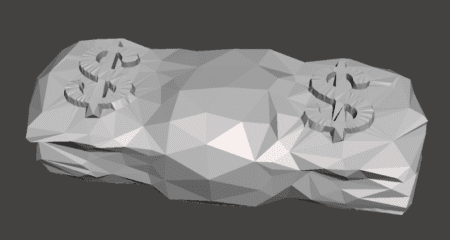 Very low-poly esque, if I do say so myself.

As for the four sketches, they are shown below: 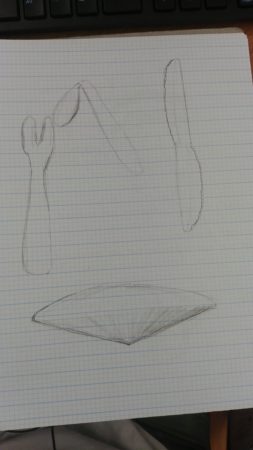 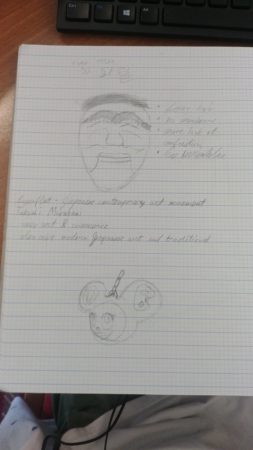 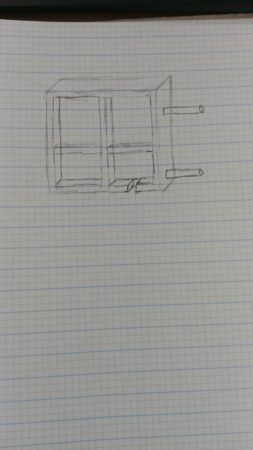 On the left: Flatware for my enemy. A fork that more closely resembles a tuning fork, a spoon that’s got a 90 degree bend down so you have to dip the whole handle in, a knife that’s sharp & serrated on the handle also, as well as a plate that’s convex on top and pointy on the bottom so you can never balance it, or food on top of it.

In the middle are the cultural object as well as our contemporary artist & artwork of choice.

The mask is a HaHoeTal. “HaHoe” is a folk village in South Korea, and “Tal” means mask. Masks like these are used in Korean storytelling of dramas and comedies. There were also the occasional exorcisms, but they’ve gone out of style.

The mask usually has incredibly grotesque and exaggerated emotions so that you can tell the mood and personality of the characters represented by the mask. These performances are called Tal-Nori (mask-play). I thought I would create one for myself, with the features of who I am: in a way by trying to combine a scan of my face with the traditional structures of a wooden mask with exaggerated wrinkles, smile, eyebrows, etc.

The contemporary artist, Takashi Murakami, is a Japanese artist that began a movement within the art community called Superflat. It’s where he combines the traditional look of wood block-prints, with the modern style of vibrant colors & characters. One thing he’s trying to push onto the Western scene is the mix of art and commerce. In the U.S. , what he calls “high art” costs millions of dollars, and could never be in the possession of the everyday individuals. However, in Japan, art is in the hands of ordinary citizens all the time, in the form of manga, anime, posters, etc etc. So, he tries to create art that can be appreciated, bought, and owned by both connoisseurs, as well as the typical individual.

In the spirit of this publicly-available art, I thought I would take one the characters very recurrent throughout his art (a character called Mr.DOB) and try to create a 3D keychain out of it.

The thing I need: Wallet, phone, keys & watch holder. The things I lose the most are: my wallet, phone, keys, and watch. After I get home, I always take them out/off carelessly and just toss them somewhere, only for me to not find them the day after. I thought it would be great for me to have a designated place for me to put them, so I also know where to always look for them.

(I realize this can be solved by just designating some corner of my wardrobe, but my room’s a mess)

This organizer would be attached to a wall with some Command strips, and have two compartments for my wallet & phone, as well as two hooks for keys & watch.

Then for the two roughly-CAD designs, this is the evil flatware complete with bent spoon, double-sided knife, topsy-turvy plate, and (tuning) fork. 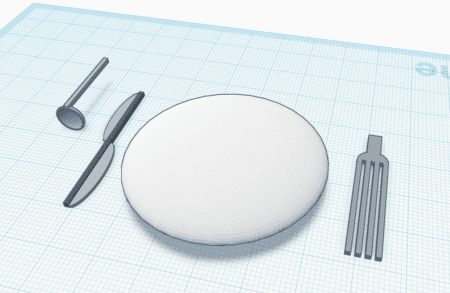 And this is the rough CAD for the phone/wallet/keys/watch holder: 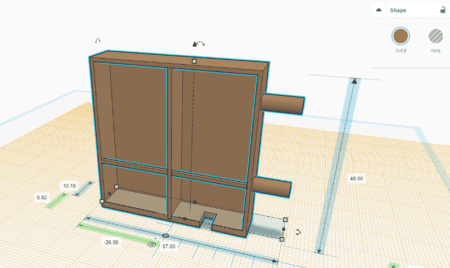 I wanted to go with the holder as the final printed object, because it just seemed more useful than the evil flatware. It was at this point that I realized a few things:

So the first thing I did was erase that, and make small models of the size of my wallet and phone: 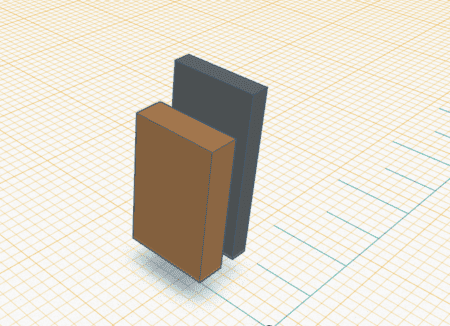 Then I begun with this design: Something to really just barely be enough to hold the phone and wallet. No bells & whistles, just two slots. 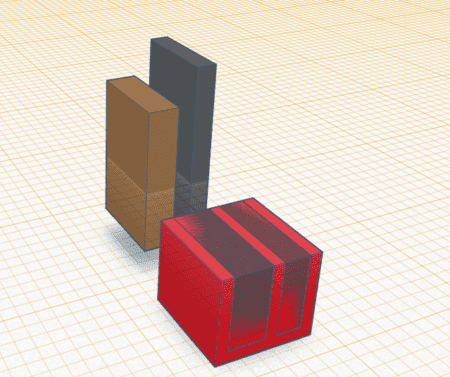 Then I thought, this design could probably use some backing, to give some leverage to the Command strips. 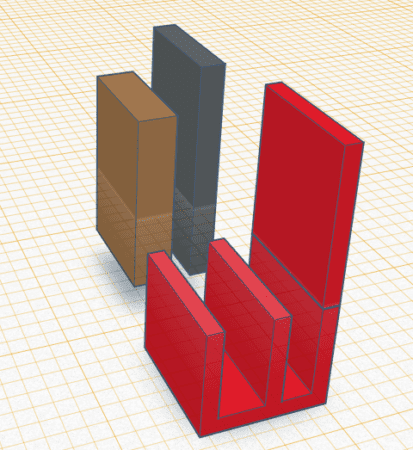 And then I realized a hole in the backing would probably be useful, in case I want to hang this from a hook instead of just sticking it to a wall. I also added some hooks to the side, which wouldn’t have been possible without the align tool because creating a new Workplane wasn’t aligned to the corners 🙁 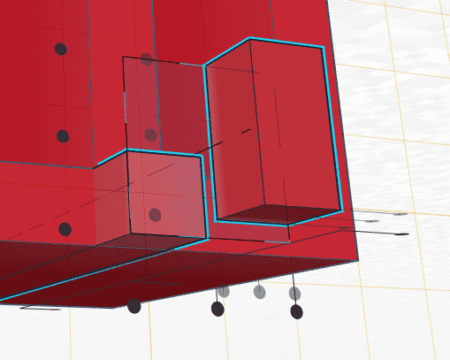 And that was the final product! Wallet/phone mockup on the left for scale 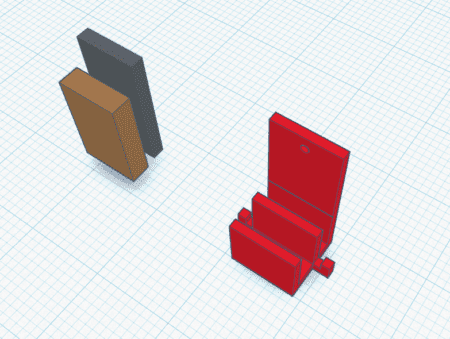 Here’s the TinkerCAD link – it should be public!

And after printing (for a whopping 10 hours), this is the final result: 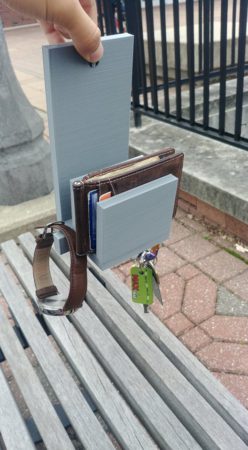 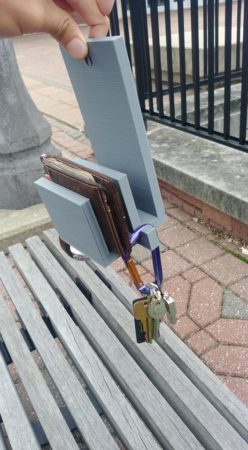 The phone is, of course, not on there as it was used to take photos.

With the project finalized, there were definitely a number of things that caught my attention only after printing it. The first, is there’s really no good way to hang a watch from a hook. In my head I pictured it hanging looped (like in the picture) but I realized that means I have to close the watch strap again after I take it off – not something that’s ideal. The keys fit there perfectly, but I feel that was more luck than planning.

Another thing that I realized, is that this is a lot of material. I set it to have only 10% infill, which definitely saved a lot of time and cost, but I feel I definitely could have designed it to use even less material (maybe a fence-like design, rather than solid walls). Otherwise, I’m happy with the design, and am very glad that the 10-hour print didn’t fail.