For my 3D printing project, I decided to follow prompt two and picked an item from my heritage. I have had this doll for a couple of years since my great aunt gave me something that my grandpa had bought it Europe. During the 50s, my grandpa was stationed in Germany and everywhere he traveled, he sent dolls to his sister. I received this one, that was from Switzerland. 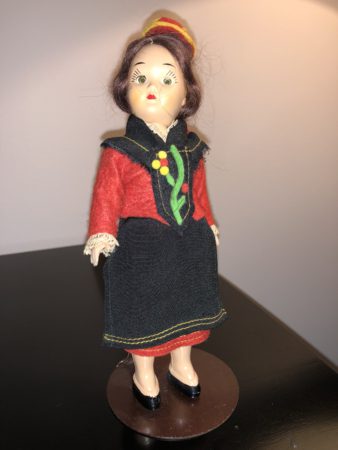 I wanted to use this item because it’s an item from my heritage and my relatives that meant a lot to my great aunt. I wanted to keep the doll similar to what she normally looks like, but just make some adjustments to modernize her a little. Once I scanned her, I realized that this would be more difficult than I had intended. The scanner did not capture the details that I wanted it to, especially her face. It got the fold of her clothes and hair pretty well, which are items that I spent a lot of time on later modifying. When I got my scan into Meshmixer, there were a lot of immediate problems that had to be worked out. First, since the doll is on a stand, I had to edit it out, which was especially difficult around her legs. Her legs were the most difficult thing to edit, and I ended up deleting most of them since I felt the more I attempted to fix it, the worse it became. Another detail that was erased was the doll’s hands – I scanned her many times in different positions, but the hands always came out like blobs. I ended up finding hands on Tinkercad and Meshmixer which worked well for the doll. 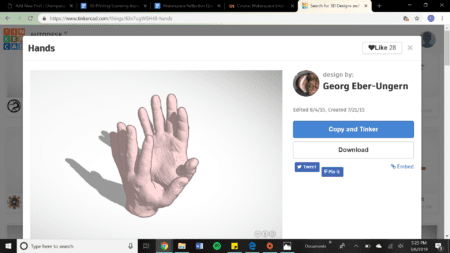 Editing was the hardest part of this project by far. I was way out of my element doing this very detailed editing and spent hours making very simple and small changes. I ended up downloading Meshmixer on my computer so I could work on it outside of lab hours. The first thing I changed was the hands, which were clearly absent from my scan. The one that was on Tinkercad was incredibly detailed, so I reduced the points on that a lot. It took a while to change them so they were of equal size and placement. I also had to make sure they were in the correct spot – so that they could be seen on the model, but not sticking out so much that they wouldn’t be supported. I ended up cutting the thumbs off of the hands and making them a separate aspect so I could get the configuration right. The second thing I changed were the shoes – the feet and legs were disastrous from start to finish – no matter what I did, they were unrealistic looking and always hideous. I found a Converse shoe on Tinkercad, which I had to mirror and fit onto each foot of the doll. Converse are the shoes I wear all the time, so I felt this was an accurate representation of me. Once the shoes were in the right place, I realized I could get rid of most of the feet that were causing me trouble. Because of the position of the stand, I had to edit the legs individually so the inspector tool would understand that I wanted each leg separate instead of together, like it kept doing. That alone took quite a while because no tool was the right thing I was looking for. And because of the heavy editing of the legs, the bottom of the skirt took a lot of damage and I had to repair that. This was easier that the legs because of the flatten tool. 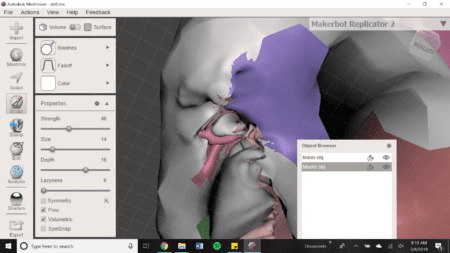 I did various editing all around the doll, particularly on the sleeves and stomach to make it more natural looking. The other edit I took a while with was the hair. The original doll has her hair mostly in a bun on her head and it’s very short. To make it seem more like mine, I used the inflate tool all around her head and neck to make it look more like natural hair. 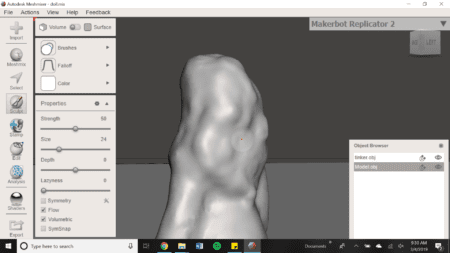 I made these changes to make a small representation of me in an item from my heritage. It was interesting to find aspects about yourself and incorporate them into something familiar, but I learned from this project that 3D printing is not my thing. It’s an incredibly interesting concept and technology and the fact that so many people get to show their creative side on places like Tinkercad is unbelievable. But I was out of my element for this project and spent hours agonizing over simple decisions to make. I’m not one to focus on details, nor to get artsy with something and I think this project proved that. Using very detail-oriented software like Meshmixer was really hard for me and I felt that I could have done a better job if I had a lot of help from people more comfortable with the software.

I ended up printing my model much smaller than the actual doll since I didn’t want focus to go to the problem areas. I had a lot of problems that I spent a while fixing – so while it was interesting to get to work with 3D printers for the first time, I was not in my comfort zone. 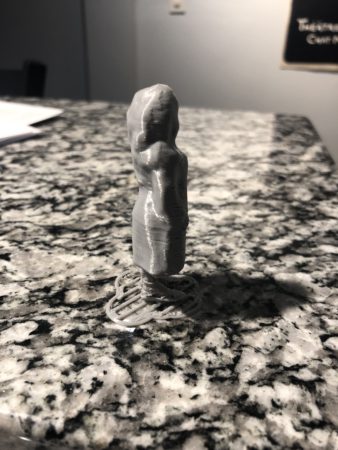