During class for the castle and alien projects, I created the following: 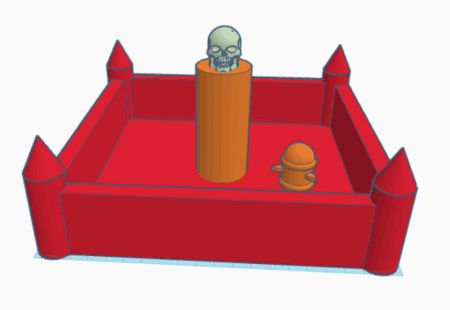 I decided to make a structurally sound castle with the round corner towers and adjoining walls. I also have a central tower with a giant skull on top to be intimidating to both the residents and outsiders of the castle. The alien that is inside the castle there has some kind of cylindrical body with pointy weapons/swords sticking out of it’s side, and with semi-circle head gear.

For my main designs, I made the following in TinkerCAD:

My first design was a set of flatware type things for people who just really don’t like circles. As such, my flatware is quite square. The bowl below is completely devoid of circular form, to appease any circle-hating people. The only problem this presented was the ability to eat with a spoon. Since a spoon is rounded, it would not fit in the corners of the bowl. 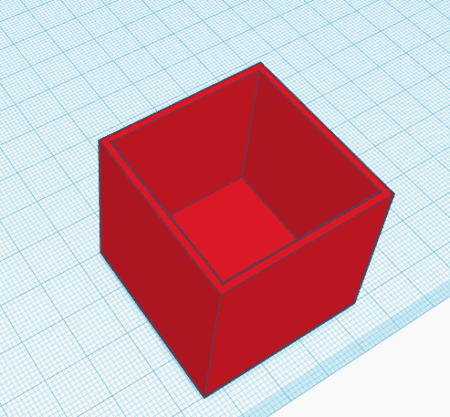 To solve this, I created a squared spoon. This spoon is quite superior to a normal spoon, as it allows the user to eat in the corners of any object, such as the square bowl above. 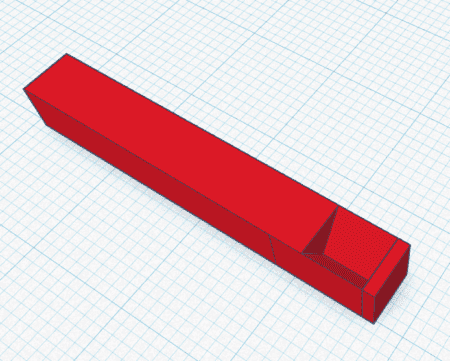 As a fork and knife and both already devoid of circles, I didn’t design them, as they would look very similar to a normal fork or knife.

I did design a square plate though, as most plates are circular, so it was definitely necessary. It has a square base with slightly raised edges, to more easily keep the food on the plate. 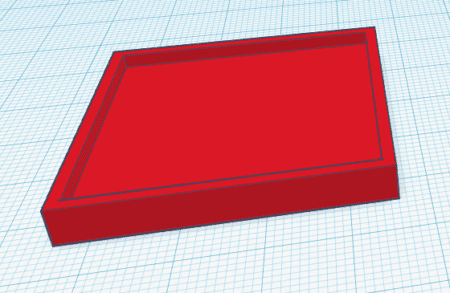 My next design was something that I need. I decided I needed a monitor stand to be placed under my monitor at my apartment, in order to give me some extra desk space. 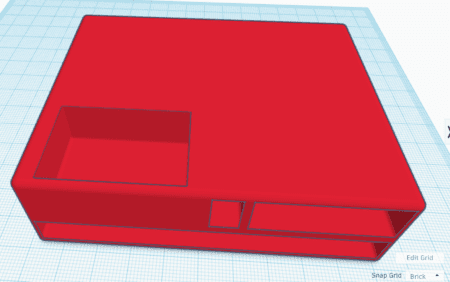 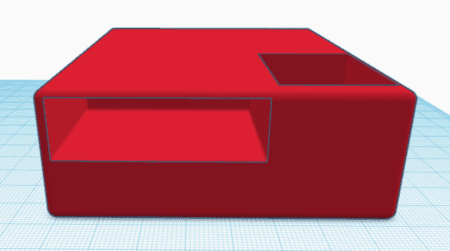 The monitor stand is designed to be box like and structurally sound enough to support my monitor. I first created a rectangular prism and proceeded to cut out useful holes and slots in it. From the front view I have a lower slot for papers and larger flat items. I also have a thinner slot above that in the middle for pencils, pens, and such. I didn’t create a hole in the back for both of those, because I don’t want things falling through the back. On the upper right, I have a hole from front to back that is large enough to support electronic devices like phones and maybe a smart watch. It has a hole in the back, so wires can be placed through the back without having to awkwardly go around the hole structure. On the top of the stand, I made a small cutout for placing smaller items that I keep on my desk, but don’t want to get lost. On the left side, I placed another slot for anything on my desk that I don’t need often such as USB sticks, a portable battery, or such. I tried to keep the edges large enough that the stand would be able to support a monitor. If I were to actually print this, I would definitely need to double check to make sure it would be thick enough to provide this level of support.

For my third design, which I printed, I decided to create a 3D version of a famous piece of art, Leonardo da Vinci’s The Vitruvian Man. 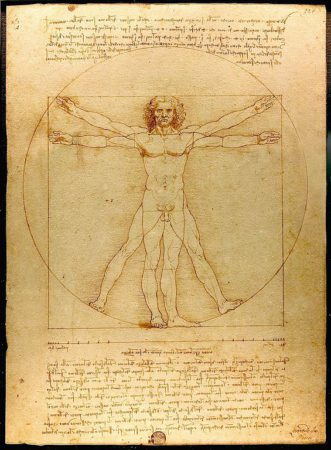 Da Vinci’s The Vitruvian Man is famous due to both the artist and what it depicts. It portrays the Proportions of Man by inscribing a male figure with two sets of arms and legs in a circle and square. It’s famousness also comes from that the design was based on a famous Roman architect, Vitruvius’s writings that relate the human body proportions to those of architectural designs. This is also how the piece of art got its name.

In order to create this, I needed to scan in my head, torso, an arm, and a leg. I got help from my friends in lab to take scans of these. 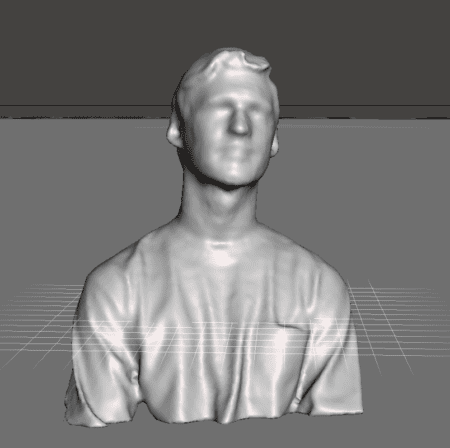 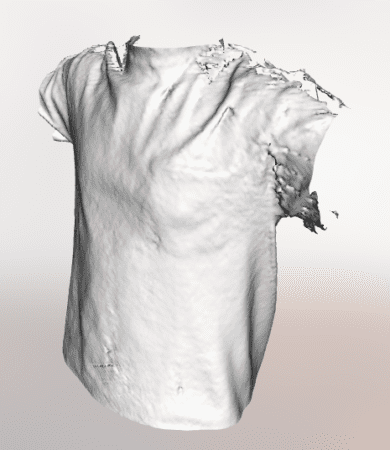 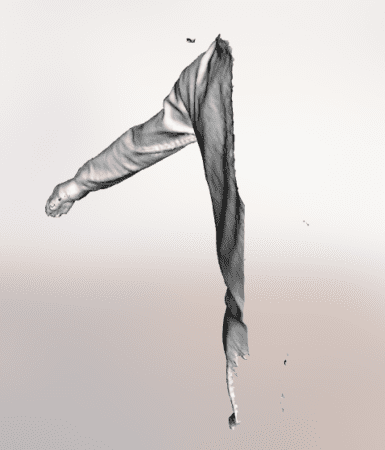 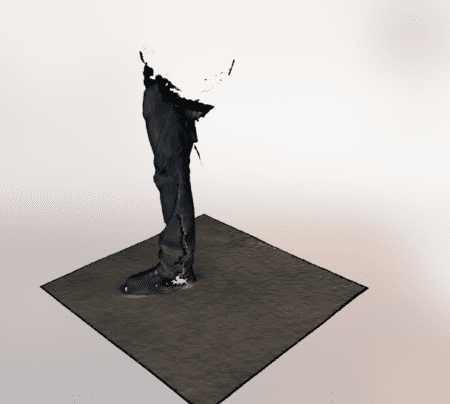 Once I had those four, I worked in Meshmixer to combine them into something that represented the Vitruvian Man, but with only the circle and not the square. For each I began by making them solid objects and plane cutting off any unnecessary parts. I cut off my head and attaching it to my torso. I smoothed it out a bit with one of the sculpting brushes and moved on to my arms. I plane cut, made solid, duplicated, and rotated them until they were about where I wanted them and then combined them with my body. One issue I encountered here was that I only had a scan of my right arm. When I went to do the left arm, my thumb was in the wrong place and my arm bent backwards a bit. I had to smooth out the thumb side and tried somewhat successfully to pull out a thumb on the opposite side with the sculpting tools. For the arms bent slightly backwards, I had to do a lot of smoothing and pulling it in the opposite direction to make it look presentable. This was all a huge pain and if I were to do it again, I would definitely just take scans of both of my arms to avoid these problems. 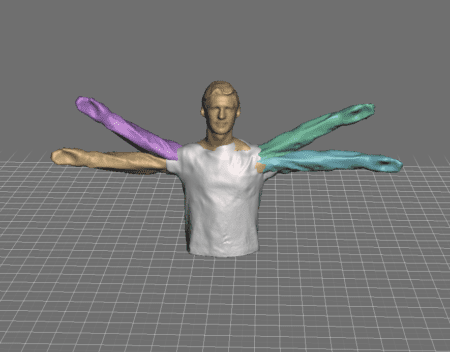 Next came the circle. I created a circular object in TinkerCAD, exported it from there, and imported it into Meshmixer. I had to rotate it and resize it in multiple dimensions, but I was eventually able to place it in the right spots and in the right size around my body. 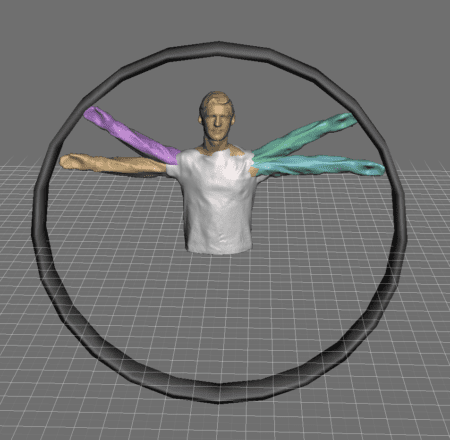 Next came the legs. I didn’t have quite as much of an issue here as I did with the arm problems, as it was much easier to make a right foot to look like a left foot. It was just pushing in on one side and pulling out a bit on the other. If I were to do this again, I would get scans of both legs though. I would only really do this to make putting it together without having a slight bend to the leg, which wasn’t able to be fixed too much. 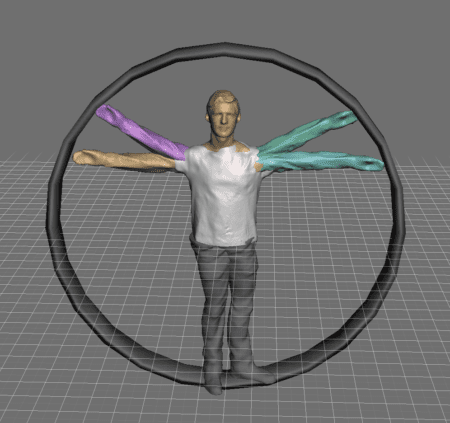 I then created the other legs and changed the sizing and position a bit on everything and it was pretty much done. 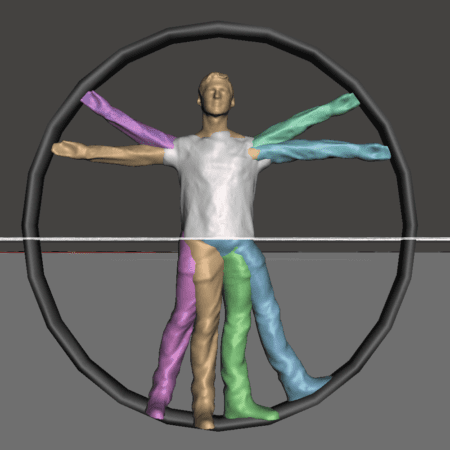 I combined it all into one object and exported it as an stl file. Then, since two of the machines at the Fab Lab broke when I went in to print, I went to BIF’s 3D printing lab to print it instead. I was advised to print it flat like below, but I think it may have turned out better if I printed it upright. The supports were extremely difficult to remove as it was, but if I had printed it upright, I think cutting them out in the middle of the object would have been easier and would have left less of a mess on the back. 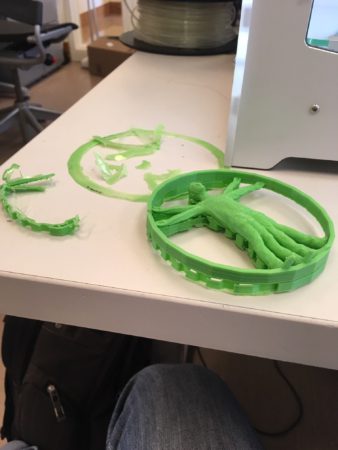