Originally, I thought I’d end up doing the Terrible Silverware Set, but I ultimately ended up going forward with the Card Holders because I wanted to design something that I knew I’d definitely keep and use.

I decided to learn Fusion360 to build the card holders, and this was definitely the most difficult part of the assignment. In my opinion, it was worth it to learn a more powerful modeling tool, because playing with many of the options, even if they didn’t get used in my design, has started inspiring me for the final project.

The “core” of the design is relatively simple – a 1.5″ high box, with a 4″ x 3″ base with a 10mm fillet. That’s what’s pictured on the left. On the right is my first draft of the bottom piece that holds the stacked boxes together. Even though I liked how it looked, I realized that the bottom would need to have a harder cut-off, so the stacked boxes simply didn’t slide off of each other. Additionally, in the concept art, the bottom piece also acts as an insert inside of the box that the cards can rest in, but I realized that this wouldn’t provide any benefit, and the cards not at the bottom would slide around anyway.

I was fairly happy with how the main part of the holders turned out – it was the simplest part of the design, anyway. I played with the bottom piece a bit more though, eventually making its shape a just a smaller version of the main box. I then figured that hollowing out the base, leaving only its rim, would save on materials. In retrospect, this wasn’t the case due to printing logistics – plenty of material was still used in building a bed for the print to sit on.

More difficulty came in learning the tool, and making sure things were nice and centered. For instance, in scaling pieces, I needed to calculate non-uniform scaling, and figure out how to translate the scaled pieces to the proper position. For example, the base of the box is a scaled-down version of the box’s dimensions – but I wanted to change the base’s x and z scale such that both had an equal rim size (uniform scaling leads to unpleasing distortion). Here’s a sample of that math. I scaled the 3″ side down to 90% of its original side, and had to calculate how to scale the 4″ dimension to maintain a constant rim-size (the answer was 92.5%). 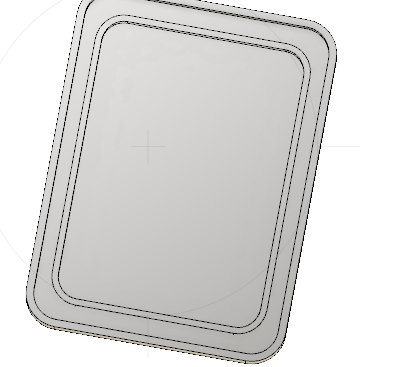 The top piece was fairly simple. The above image shows the underside of the box’s top – it’s ultimately two concentric rims. The tops of the box’s sides sit between the two downward facing rims, “locking in” slightly. In retrospect, the top/locking mechanism is the thing I’d like to change the most. At the very least, lengthening the outer rim would make it more secure fairly cheaply. Unlike the base of the box, the lid’s hollow nature did save on material costs – given that I printed the top upside-down, no bedding was really necessary.

I’m pleased with how the final product turned out. Though they’re relatively simple, I got a lot out of designing them, and a simpler design was ultimately a better design. It’s something that other people could easily use, either printing as-is or changing the design dimensions slightly to fit different card decks, perhaps for other games or something. They’re also pretty easily to customize with stickers or something.