The 3D printing assignment is a biweekly project. We’ve learned TinkerCAD and MeshMixer during the first lab session, and 3D scanning during the second.

Alien on the Wall

For the first project, I used TinkerCAD built the alien-on-the-castle model. The castle was built mimicking a station on the Great Wall. Pretty straight forward–stacking cubes together, cut out the windows, and cut the shooting cutlet on the top. I used the stock rocket man model as the basis for my little alien. Then, after imported the .stl file into MeshMixer, I added horns, arms, and other features from its stock models to the alien. Then I used the sculpture tool for some final finish/smoothing on the details.

For the second project, I chose the third option–turning a famous painting into a 3D model. The original art piece is the iconic portrait of Napoleon — Le Premier Consul franchissant les Alpes au col du Grand Saint-Bernard (The First Consul crossing the Alps via the St. Bernard Pass). This painting projected an idealistic portrait of Napoleon during his campaign to northern Italy in 1800. He led his army crossed the Alps and delivered a surprise attack to the invading Austrian army and further established his status as a liberator and general in Europe. The original art piece was a gift from the reigning Spanish king to Napoleon as a display of goodwill and a starter to improve the diplomatic relationships. The artist, Jacques-Louis David, is a loyal fan of Napoleon himself. Many elements in the painting showed his fond of the rising general. On the rocks in the bottom, he painted the name Bonaparte, Hannibal, and Charlemagne putting Napoleon into the greatest generals hall of fame. The artists portrayed Napoleon on the horse with a posture similar to a sculpture of Alexandar the Great. Such an arrangement, with the flying cloak and many other touches, made Napoleon’s figure glowing in the viewer’s eyes and thus the “short Corsican” is yesterday’s news. 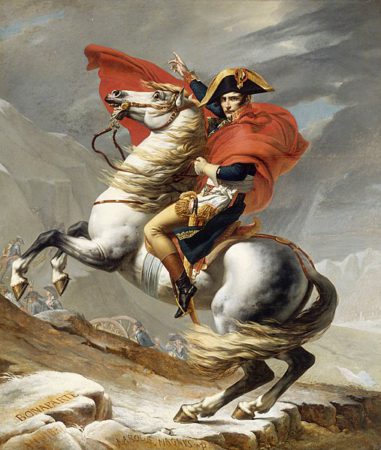 Here for the model, I made a modified version of that painting. The work was done with a 3D scanned upper body of myself, a stock horse model, and some basic geometric shapes. I imported both the horse model and the scanned upper body into TinkerCAD. Then added the torso, right forearm and both legs using primitive shapes with some help of the second working plane and rotations. After imported into MeshMixer, I used sculpture tools smoothed the surface and made joints looked more natural.

I took the design to the MakerLab in BIF. They use Ultimaker 2+ in the lab and PLA as the default material. The entire process took about 4 hours. Cura, the default 3D printing code software at the lab added supports automatically, and a lot was added as a result of the hanging body of the horse. I used the default setting for the printing: 0.6mm nozzle, 20% insert. As shown in the second and third pictures below, it took an hour to remove all the supporting structure. It was difficult for the large portion of supporting and delicate parts on the end, like the two front hoofs.

For the modeling part, cracks appeared quite often during the inflation (draw) processes, especially around joints. My solution was to repeatedly inflate and flatten around the crack.

For example, there was this crack when I was trying to join the two tubes (as the thigh and calf) to create the left leg. It was removed by the repeated treatment in the final model.

And for the printing part,0.6mm could deliver a satisfying satin finish on some surfaces. Therefore, for an easier after work, we should definitely consider this during the design process. It could still be fine for a slightly negative angled surface, but the result would be miserable after a certain threshold. For example, the horse belly is still very good, but the bottom of the arms and boots are really rough. Also, the support generation algorithm might not be the best way to go. I would definitely try to design the support as part of the model next time, especially when there are lots of tiny corners.