I made a cat(pet) house for my final project. First, I made a comfortable bed that goes inside the house with a blanket and sewing machine. Then, I made the house with baltic birch wood and power tools (Neil helped me with the tools).

The biggest challenge I faced was wood kerfing. I wanted to make round edges for the house, and in order to do that I had to make small cuts on the wood and bend the wood. It was not just a time consuming process, but also a very difficult process that required concentration and accurate calculations. First, I had to measure the outer and inner radius of the round corners and divide the difference by the depth of the cuts. Neil explained to me the measuring and calculation methods. We used autoCAD to calculate and create the prototype for the kerfing. After creating the cuts however, the wood would not bend as desired, so we had to create additional cuts in between the original cuts. I realized that there still could be errors like this even when we have calculated and done everything accurately. 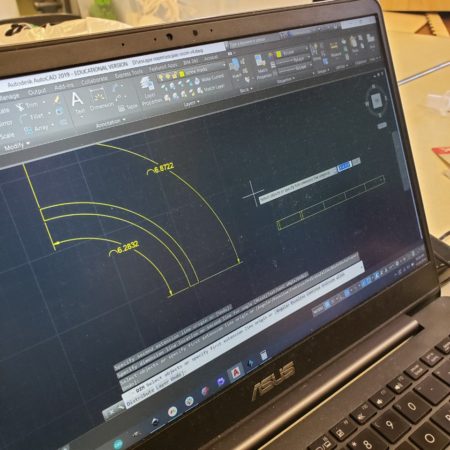 Second challenging part about wood kerfing was bending the wood after creating cuts. It required a lot of patience. As the wood was kind of thick, I had to heat/steam it with an iron and wet cloth. However, after an hour of heating and slowly bending the wood, the wood broke as one cut was totally bent in while other cuts were not bending it and sharing the pressure. I later glued the broken parts together, however the whole process of bending was pretty stressful as I had to be careful and hold the iron and wood for a very long time.

What I am proud of is successfully kerfing the wood. Although it was my biggest challenge, it turned out great at the end. It was such an advanced method to try on my first time ever working with woods, but I am very proud of my effort and the outcome.

My first learning goal was to successfully learn about the materials and the tools used in woodworking. I learned a lot about wood and tools through research and Neil’s explanations. I visited the wood shop to get a desirable wood material for building a cat house and learned that birch woods are cat friendly and also eco-friendly as birch tree grows fast so when the wood fell there is no disruption of biodiversity. Neil taught me general knowledge of woods such as the fillings on the wood board and grain direction. He also taught me the wood kerfing method and how it works (e.g., measuring the radius and creating cuts).

My second learning goal was to improve my sewing/textiles skills. It was challenging stitching through the thick blanket textile, so I had to use both auto and manual (to go slow and accurate) methods with the sewing machine. Also, I had to hand sew several parts of the bed such as the openings for the stuffing to go inside of. My sewing skills have improved overall as I have worked on several different projects involving sewing throughout this course.

My final learning goal was to apply and incorporate my creative design and usability ideas on an actual tangible object. I am pretty much satisfied with the design of the cat house as first, it has round edges for aesthetics and also safety, and second, it has good usability for the cats. I created two windows along with the door for the cats sneak through or put their hands through. Also, I wanted to make the cat house that could also be a good furniture in my house, so I made color choices that were modern (black and white) and not too fancy or noticeable.

The most significant thing I have learned that is not technical was being deeply involved in and enjoying the entire process of making. I have participated partially in art-related or creative projects before such as prototyping for an app development project, but being responsible for the whole process was a very cool experience and practice for me. From making design decisions, planning and prototyping to making, completing, and presenting the process and the outcome to a group of people required a lot of time and effort, but I really enjoyed doing it. Owning it, I’d say, gave me a passion for making, design thinking, and sharing.

First of all, I became more passionate about exploring and trying out new areas of making. Throughout the course, I learned a lot of different topics such as sewing, woodworking, arduino, and 3D printing. The more techniques and methods I learned, the more I gained interest in makerspace. I think being a maker is being able to apply your knowledge and skills on your work and sharing with the community. By sharing with the community doesn’t necessarily mean giving or donating your skills or products, but can simply mean sharing your thoughts, creativity, and passion with other people. I felt like the staff members of the fablab are doing a good job at this. I would like to consider myself as a maker if I participate in creative activities more often, which I am definitely planning on doing so. I was inspired a lot by my classmates’ projects, and I want to try out new areas of making.